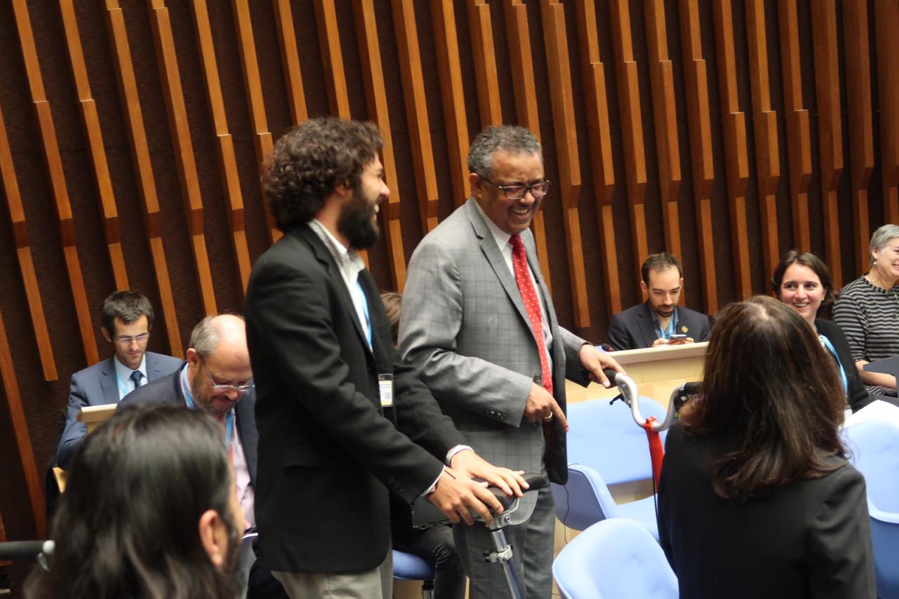 “we need more human-oriented cities for cleaner air and health”

At the first World Health organization (WHO) on Global Conference on Air Pollution and Health in Geneva this week, the Breathe Life campaign around clean air for a healthy future got strong commitments from global leaders, governments, IGO’s and NGO’s to change the way we live and work as we do now. “600.000 children around the world die every year, because of air pollution, mostly in developing countries. In London, a 9-year old girl called Ella, lost her life because of asthma. It’s time for change. No more air pollution,” Christiana Figueres said during the opening session. Dr. Tedros Adhanom Ghebreyesus, Director General at WHO, and Sao Paulo Brazil Bicycle Mayor JP Amaral opened the end ceremony riding in on a bike, to underline the importance of the shift from car-centric cities to human-centric.

Bicycled Mayors and leaders are representing the more radical changes needed for us to not only survive, but thrive in a future of climate and pollution instability. This leadership network is a decentralized, yet cohesive group of 21st century catalysts, dedicated to rapidly shifting our urban mobility priorities from car-centric to human-centric, thereby setting the stage for a wider-range of changes that benefit all city dwellers.

Every percentage shift from a car trip to a bicycle trip results in an exponential improvement in all facets of citizens’ quality of life. To this end, a new group of leaders and changemakers must trigger and accelerate this shift, as current leaders lack the sense of urgency, and political will.

“Bicycle Mayors and leaders are at the conference to declare that our reliance on cars for urban mobility has reached its end-point, and a new, more human, healthier, happier and more prosperous city is possible”, Maud de Vries, co-founder of BYCS, said. “We call an end to the fallacy that more cars on roads lead to happier, healthier, more fulfilled lives. We know that in fact the opposite is true. To this end, we are leading the shift to more bicycle usage thereby ushering in an era of city life that is more human, healthier, happier and more prosperous. Cycling has many, many beneficial side effects and I am excited to see the commitment from world leaders and governments here in Geneva, to help us and our partners, like the Global Call for Climate Action (GCCA) make the shift.”

JP Amaral: “Bicycles transform cities, cities transform the world. UN says, by 2030, two-thirds of the world will live in cities. Therefore, the BYCS-organization and the Bicycle Mayors committed to 50×30, half of all city trips by bicycle by 2030. And secondly, we promise to have over 200 Bicycle Mayors worldwide by 2019. We think cycling is true transformation, not transportation.”

Amsterdam based social enterprise BYCS initiated the Bicycle Mayor Network in 2016. What started then, with one Bicycle Mayor in Amsterdam, has now grown out to a full-fledged network of passionate changemakers with Bicycle Mayors accelerating city progress on every continent.

BYCS is an Amsterdam-based social enterprise driven by the belief that bicycles transform cities and cities transform the world. Our mission is called 50by30: 50% of all trips by bicycle by 2030. It demands the brightest ideas and the most determined action. And we believe it will lead to a fundamental increase in health, happiness and prosperity for all. We work towards 50by30 through initiating, testing and scaling breakthrough ideas around cycling. We invest our profits into managing the global Bicycle Mayor program. In all our work, we always ask – ‘where can the bicycle take us?’