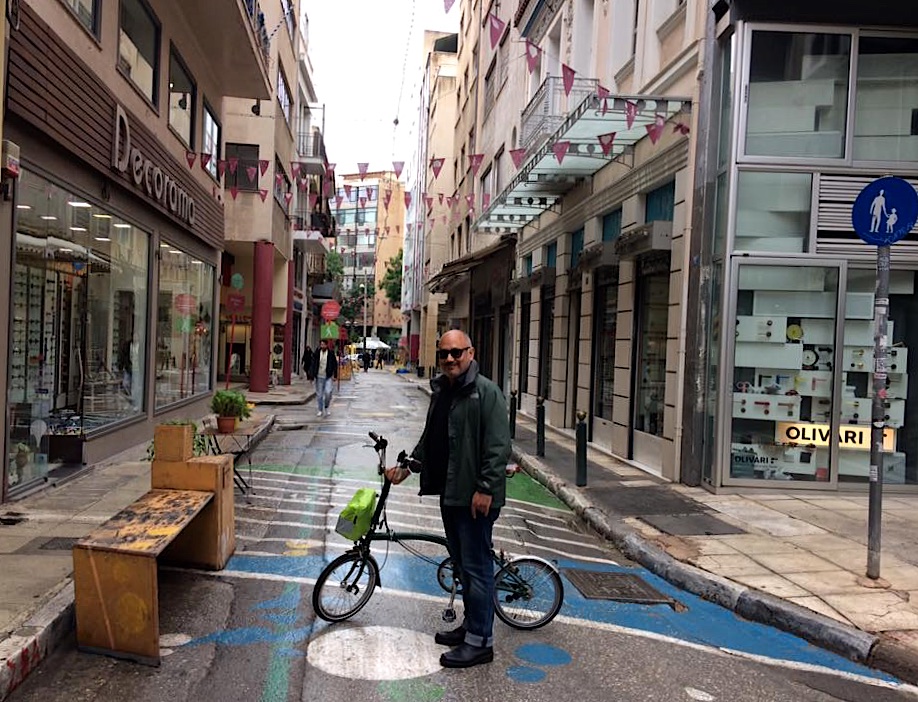 My name is Spiros Papageorgiou and I was born and raised in Athens. I work for cycling for the last 21 years, as founder of MBike – the main communication platform for cycling in Greece. I organize cycling events and I am also part of the NGO Cities for Cycling which has established to promote cycling in the Greek cities. I strongly believe that cycling is the simplest solution to some of the most complicated problems cities are facing today like pollution, congestion, noise, safety in the streets, social equality and of course health, both mental and physical!

Athens is at a crucial point concerning cycling. Citizens understand that cycling could be a choice for them but the lack of infrastructure together with the car centric status quo of the city, makes the situation complicated. On the other hand, we have a lot of good practices and case studies from other cities which shows that most cities had to overcome pretty much similar problems. And they made it. So my mission would be to attract possible partners among the decision makers and materialize, even through baby steps in the beginning, projects which will make cycling more feasible and visible in the city.

The main obstacle would be the total lack of infrastructure. It will take time and a lot of effort to actually create the first network of bike lanes. The political cost for anyone to start working towards this direction is critical and at the same time at the moment, the bottom up procedure doesn’t seem to work either. We have to change that!

My first steps would be to contact Athens municipality, Ministry of Transport and Ministry of Health and ask for their cooperation both in political and technical level. Through their help I would like to create marketing activities for cycling, to point out the importance of secondary roads in the city as a basic network for cyclists and also create a cultural route in the city!

Athens made it through a tough economical crisis and also a very delicate immigration situation. The city managed to overcome some really serious problems through innovation, hard work, social acceptance and cooperation. And we are proud for that.