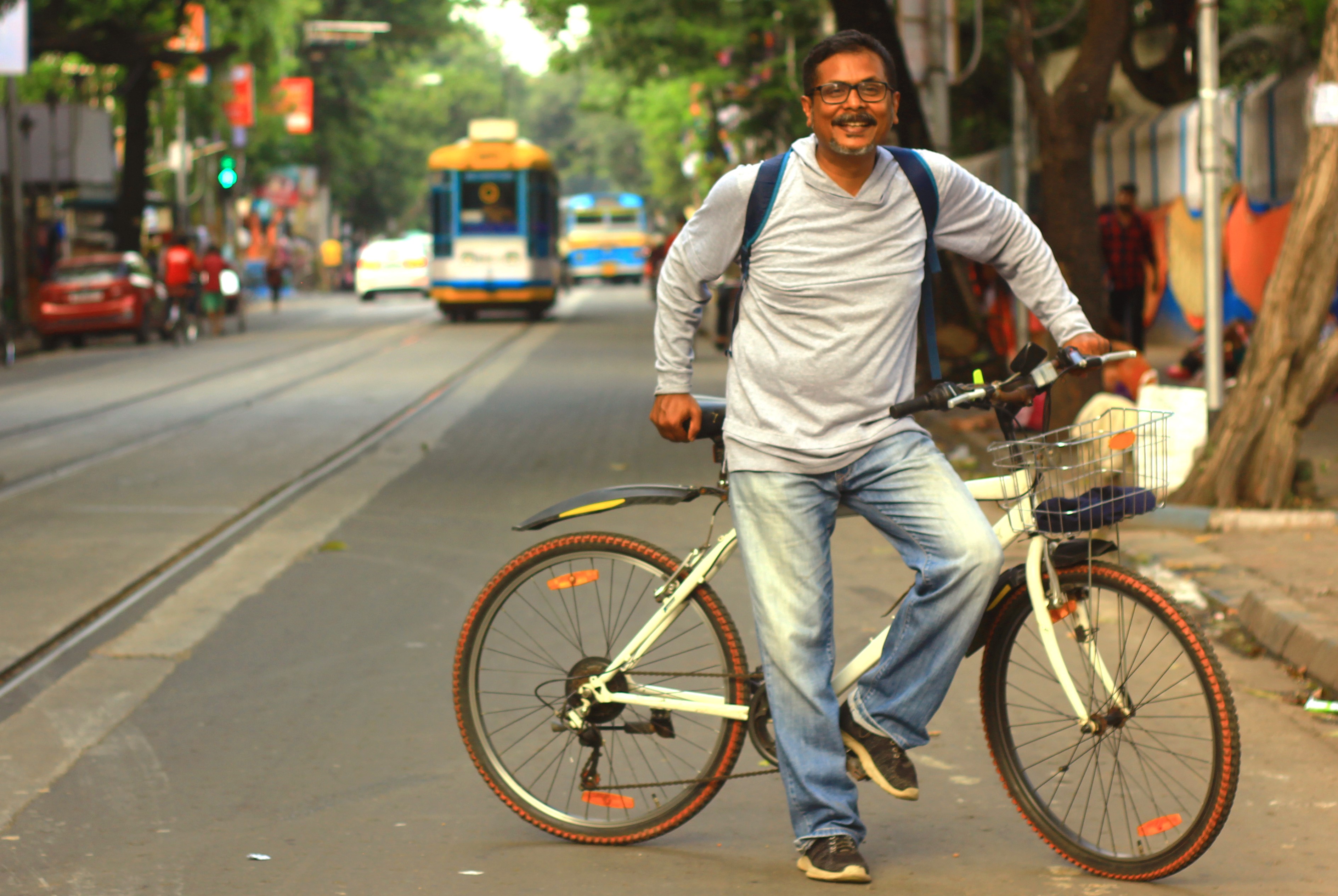 I am a freelance media person by profession, a devout cycling enthusiast, and an active contributor to the endeavours of Kolkata Cycle Samaj, with a vision to promote and normalise the use of bicycles in Kolkata, India. Cycling had been an integral part of my childhood, returning to my daily life after a temporal gap when my son was born, and whom I carry around on my bicycle. Now, living with an abrupt work schedule, I dread the thought of a life wherein I don’t have my bicycle for my regular commutes.

Given that there’s an existing ban on cycling in the city, my mission, as its Bicycle Mayor, is to initiate and foster processes which lead to the formation of a cycling culture herein. I do it, not only for myself, but also for the thousands of others who traverse the city streets on their bicycles, despite the arguably adverse conditions.
That said, I intend to work closely with the likes of Kolkata Cycle Samaj, as well as the concerned governmental and non-governmental bodies, in order to
✓ Lift the ban on cycling
✓ Promote cycling
✓ Initiate the development of infrastructure
✓ Inspire a culture change in favour of cycling, leading to increased uptake and use

There are quite a few, actually. First, there’s a ban on cycling on some of the major arterial roads of the city, which connect prominent residential and commercial localities. Second, despite the rising climatic concerns at a global scale, and a rapidly degrading air quality in the city, the government and other authorities express a sort of aversion towards cycling. There’s an utter lack of cycling infrastructure in Kolkata. Moreover, no policies have been formulated to promote cycling, and to ensure the safety of the city-cyclists. Third, there’s also a sort of cultural aversion among the common masses with regard to cycling. Consequently, there’s a perpetual othering of the many who traverse the city-streets on their bicycles, as the dominant aspiration is for greater automobility.

With the belief that it’d be a major step in the right direction, and with help from KCS and the bicycle-friendly citizens of my city, I have plans to conduct a census to calculate the number of cyclists plying the city-streets.
Furthermore, I would interact with the concerned government offices and officials, urging them to undergo changes and introduce infrastructural development for cycling, like, identifying the locations for cycle stands, cycle lanes and bicycle sharing system etc.
I also intend to actively engage in interactions with the citizens, either directly, or through various channels such as the social media. Doing so, I’d attempt the formulation of various programs and campaigns which would work towards instilling a sense of need and desire with regard to cycling. Through these, I believe, I’d be able to initiate the much-needed holistic and cultural change which would facilitate greater adoption of bicycles in my city and beyond.

Most importantly, I think, other cities must learn that it isn’t a great thing to have structural impediments to cycling. Unfortunately, my city is yet to learn this lesson, but I’m certain that it will soon. But, there’s definitely something that one might learn from the many people of Kolkata, who choose (or are compelled) to heavily rely upon their bicycles for their transport needs. If you love cycling, and feel that it is important for you, your city, the world that you live in, and for those who come after you, there’s no impediment strong enough to stop you from taking your bicycle to work, to play, and literally everywhere.