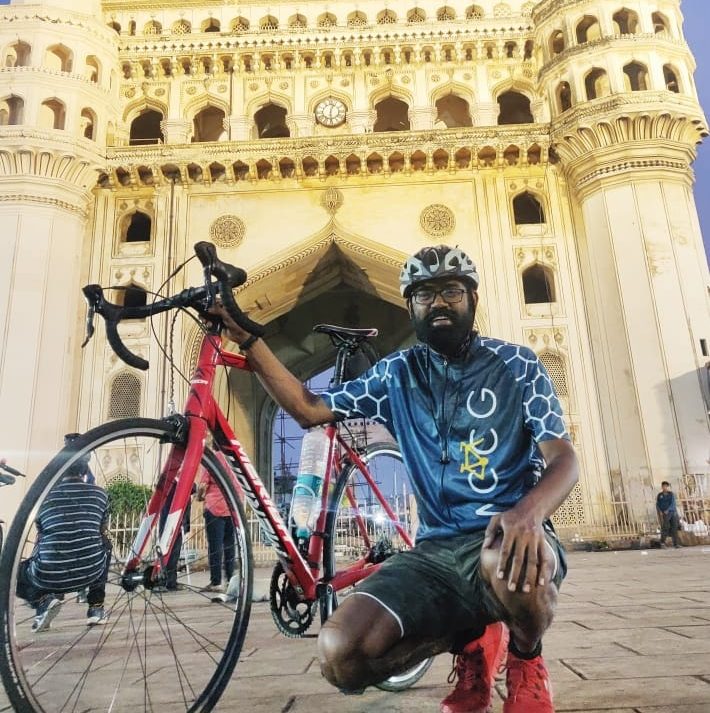 My name is Santhana Selvan. I am 20 years experienced IT professional, but in addition I have 6 years of experience in promotion of Bicycle in Chennai and Hyderabad, community creation, development and nurturing for Happiness in the community via Bicycle adoption and in turn advocating health, environmental, economical and societal benefits. I am an avid cyclist, making local commutes of up to 10 km per day by bicycle near my home and recreational cycling 5 times a week of about 30 kms per day.

Primarily, my goal during the term is BYCS’s 50*30 deriving from the Organization’s objective. However, to specify sub-goals, I will categorically split the goals and actions into two broad categories.

Goal No-1: Awareness and Promotion of Cycling – Behavioral Change
Goal No-2: Infrastructure and Policy impacts.

1) Health and Environmental Awareness: Awareness about safeguarding environment, Reducing Carbon footprints and the necessity of improved Health is not completely realized by many in the city. Having no awareness leads to the first challenge. This awareness must be provided to people.
2) Landscape: Hyderabad is a hilly place, where there are lots of ups and downs. There will be a mental block in taking up cycling for many because of these ups and downs in all the roads. This mental block must be removed from people.
3) Safety:
(i) Currently, there is very less awareness for all the motorists on sharing the road with cyclists. There is very less safety for the cyclists on the road with the rash motor vehicle drivers (both 2-wheelers and 4-wheelers)
(ii) There is an opinion for many that the roads are not very good for cycle with the potholes etc.,
4) Cycling Awareness: Last but most important, Awareness about Cycling itself is not there. Promotion about Cycling and its benefits in all ways will help solve this.

Change must come from ourselves. I have changed myself to do all my local needs and commutes via Cycling.
Promotion of Cycling will include the following strategies:
1) Actions can be done in three folds – People’s, Government’s and NGOs perspective.
Via people –
(i) Increase Awareness: More promotion of Cycling in terms of increasing Awareness about Cycling and its benefits. By visiting Corporates, Schools, Colleges for Cycling Promotion. In the Covid times, start with Webinars and Videos release etc.,
(ii) Community Building: By forming communities in all places I visit, we can build cycling groups where they can continuously ride and also become inspiration to many others and it multiplies. I believe communities will make spread Cycling and there has to be numerous cycling communities in a particular apartment society or a school or a college or a particular region etc., Hence, by the end of 4 years, there has to be 100s of Cycling communities formed in Hyderabad city in each and every pocket. With the Communities formed, the initiatives like Cycling 50*30 and taking cycle for all local needs will have people adopt cycling. In addition to that, Everyone to be motivated and inspired to become Cycling Angels and start Promotion of cycling in all of our own ways.

(i) Be in touch with Government and liase with various other ministries and governmental/non-governmental organizations to support Cyclists and make a safe and proper infrastructure for cycling.

(i) Working with NGOs and other organizations for promotion of Cycling. Liase between NGOs, Government and People for achieving the goal of promotion of cycling in Hyderabad.
Form Group of Local Bicycle Councilors in every area of Hyderabad to work with Bicycle Mayor for effective operations and achievement of our Goals – 50*30.