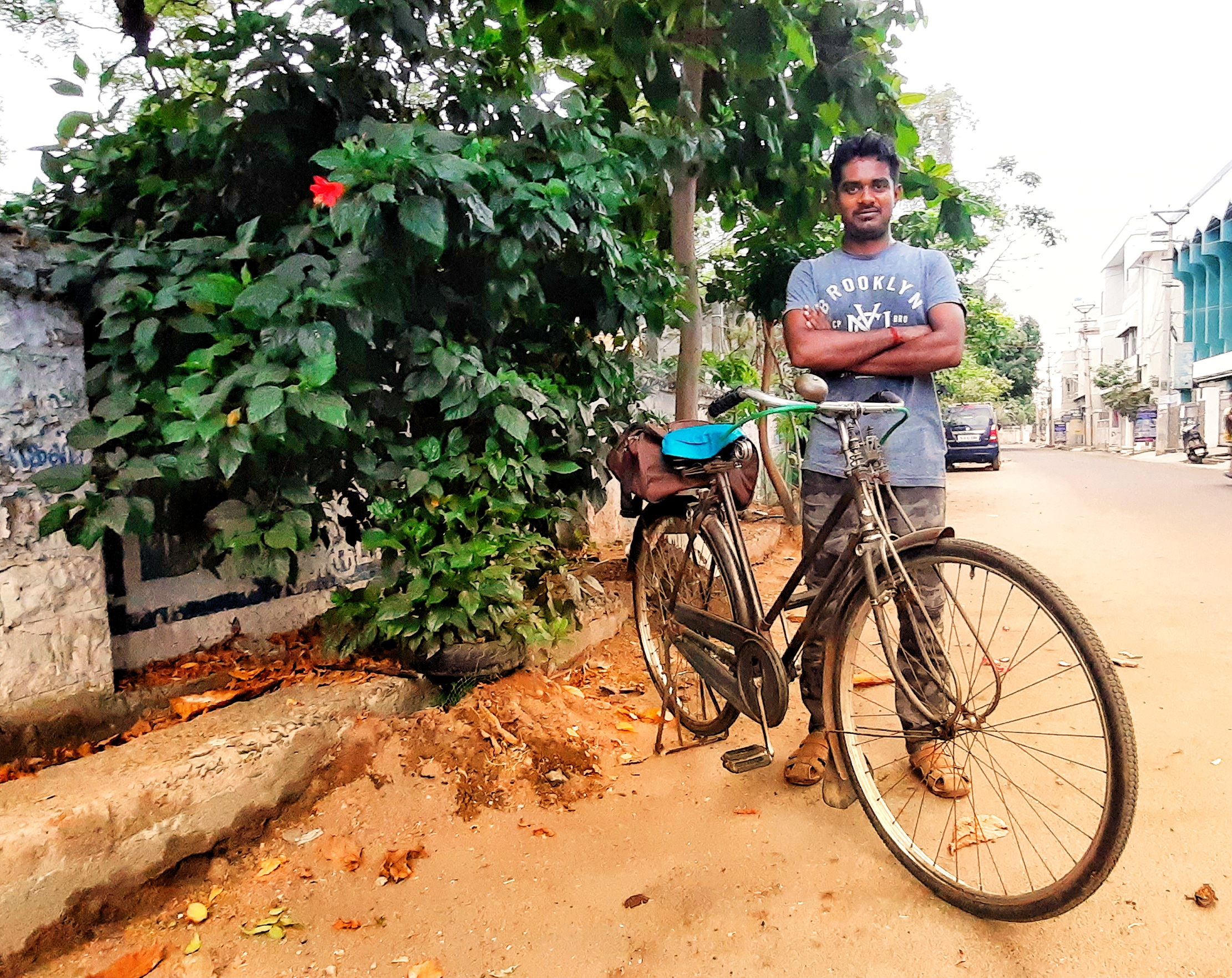 I am Kesavamoorthy Kesav, aged 27 and I come from a 70 year old bicycle family which has served people with bicycle needs in Nambiyur. From 1940s to 1990s my Grandpa (Thatha) was serving as a bicycle mechanic, and with his in-depth knowledge of them, he delivered bicycles in an uncompromising perfection mechanism and without business mind, he was giving bicycles with an uncompromising perfection. After his death, with the same service mind, our family has continued serving the surrounding people with the motto “Cycling Towards Nature’. *While I was studying 11th grade in 2008, a group of cyclists visited our school creating awareness about the Bicycle usage and its importance.

I live my life with a great respect for water, air, soil, the sun, and the universe. Having ridden bicycles since my childhood, I have gained more understanding and wisdom about the bicycle, how compatible it is with human life, its simplicity, and its sustainable nature. I want to use my knowledge in the field of bicycles to teach others to understand and appreciate its value, and I hope that by riding them, people can be filled with love, happiness, boldness, confidence, and respect for nature.

There are three main obstacles when it comes to the adoption of bicycles in my city. Firstly, people’s trend of ‘copying their neighbor’ means that often individuals will simply buy a motorbike or a car to fit in with what others are doing. Secondly, riding bicycles has negative social connotations and is not deemed a legitimate form of transportation for adults. Often, it is seen as something only children ride. Thirdly, the government has continuously subsidized and promoted motorized vehicles whilst simultaneously discouraging bicycles, despite the harmful environmental impact of pollution. The obstacles my city faces are likely to be shared by many Indian cities.

Even though bicycle usage has increased in 2020, I want to promote the bicycle as a simple form of transportation. In order to do this, I will I want to help restore people’s old bicycles, teach basic maintenance and service techniques, visit schools to create awareness, and carry out weekly bicycle tree plantation programs.

I think it is important to view cycling as a practical and simple way of getting around. In the beginning of my cycling life, I was taught that cycling was done for fitness and recreation, not for transport. Nowadays, many people still cycle simply for exercise and to show off their expensive gear yet, they still use the car to go to work. I want to change the perception of cycling being an expensive and complicated activity, which is a view that keeps people from using the bicycle as a simple transport. I want to raise awareness about this and promote the bike as a simple solution that leads to a more sustainable life that respects nature.