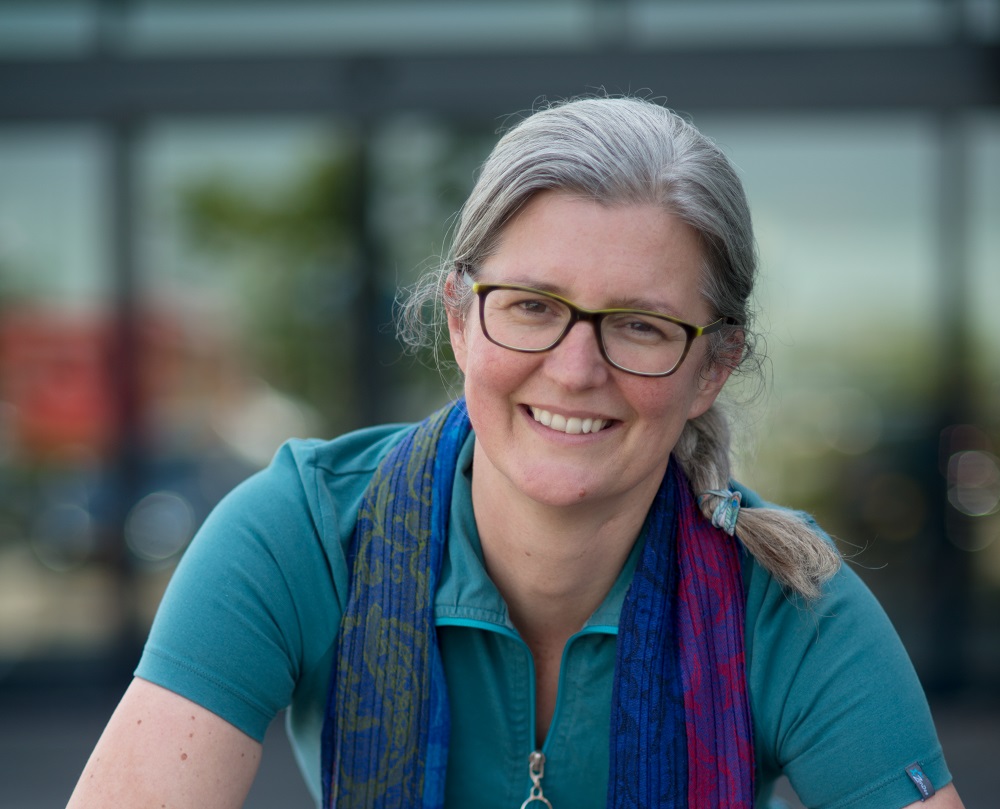 7 min read.
Angela van der Kloof is an experienced trainer, speaker, researcher and consultant at Mobycon. She is specialised in cycling planning, education, engagement, and explores the possibilities e-bikes and cargo bikes hold for transforming the ways families, businesses and cities operate.

How did you become involved with cycling research, advocacy, and working with caregivers?

It started when I was still a student pursuing a masters in Human Geography where I focused on women’s studies in developing countries with a specialisation on North Africa and the Middle East. I was already a trained teacher in Geography and Economics, and during my degree I got a bit bored with just being in school and not working directly with people. I stumbled across an advertisement from a women’s centre in my city, looking for volunteers to teach women to ride bikes. I thought it could be interesting because their target group was from the Mediterranean area, as well as women from Suriname and the Antilles.

At that point, I was a typical Dutch student that cycled a lot without really thinking about it. Through this experience however, I encountered people for whom cycling meant something completely different. It made me think about the role that cycling plays in a person’s life and how that is connected to where one happens to be born and the gender roles people navigate during their lives. In my studies I was studying the relationship between gender roles and public space, how women occupy it (or not), the rules around it and how women deal with this. I spent half a year in Cairo, where I conducted interviews, and participated in the lives of women in a low income area. There were actually a lot of similarities in strategies that women had to deal with quite strict social rules. I found them creative, inventive and got so much respect for the way they organised their lives. I took home this experience to the Netherlands and continued to use that in my work.

By then, alongside the director of this women’s centre, we had started to set up a bike school for women. We had locations for lessons in different neighbourhoods of the city, creating a network of volunteers and women who wanted to learn to ride bikes. I quite quickly developed teaching materials, to make these lessons more attractive, and one thing led to the next. I learned how powerful cycling could be as a tool for change, for personal empowerment and how it can contribute to society. It’s within this mindset that I created a network in the Netherlands and later abroad through international conferences. In 2008 I joined Mobycon, which enabled me to broaden my focus to other places, and where I continue to pursue the ambition to create a link between social policies and traffic policies.

The burden of care work falls predominantly on women, and this makes urban mobility patterns different across genders. Could you speak about this dimension? How can facilitating cycling benefit caregivers in their everyday life?

Caregivers appears as a neutral term, but in most cases we need to recognise we are talking about women. Cycling is a huge opportunity to facilitate caregivers throughout the world because indeed they typically are the ones who do a lot of trip chaining, who take a lot of short trips, and these trips could easily be done, theoretically speaking, on a bicycle. Of course you can do many things while walking, but the bicycle’s advantage is that you can carry a lot more and it is considerably more energy efficient. This energy efficiency is a strong argument because in a lot of countries, caregivers, especially women, suffer from time poverty. A lot of women spend a lot of time in public transport, and a lot of public transit networks are very inefficient when it comes to facilitating the types of trips that these caregivers make. They don’t need go to the downtown centre, they more frequently move cross neighbourhoods, and public transit networks are typically centred on the downtown area where certain types of jobs are located. A lot of these things have been known for decades, but haven’t been taken seriously enough and have been neglected in research. There is a need to move beyond the mere acknowledgement that caregivers’ mobility patterns are different compared to the typical male or full time pattern. We need to be very strong in making the case to act, so that the needs of caregivers are taken into account. They are not a demographic that has the time to go to public meetings, to write blog posts, or to advocate on twitter. There is a need to elevate their voices and convince policy makers that this is an important need, and not a small thing.

You have both researched and called for gender aware cycling policy. What is it, how can this be achieved and what does it look like in terms of the specific needs of caregivers?

It’s important to begin by acknowledging that there is a research gap in this area. There is a need to understand the viewpoints of females and caregivers, and for that to succeed there is a need to speak with people and conduct more field research. Generally these needs are overlooked, and this group in particular has time constraints, or doesn’t feel like they have the knowledge to come up with a meaningful contribution, so we need to come up with ways to include these voices in a non-traditional way. You may have to reach out in a different way, for example through interviews and panels, and you may need to compensate people for their presence to find a more diverse group that is able to participate. Women’s groups working outside of transport policy should also be included, to create a link with other issues and start bridging the different topics that are being fought for in the city.

In terms of what it could look like, from the gender perspective the barriers to cycling must be looked at. One typical barrier for caregivers is the fear of harassment. In many cities, public spaces are not welcoming for women. So in the development of cycling routes, do you choose the quickest route or do you choose the route that has “eyes on the street”. In the the late 1970s, women’s groups in the Netherlands were very vocal about which routes to choose. Choosing routes with houses along the street as opposed to a route through a park may be less attractive during the day, but it feels much safer at night. Street lighting is very important, as well as cutting away certain bushes close to the cycle path in order to create public space that feels more secure for women.

We hardly talk about these issues in cycling policy, but as a cyclist, even as a pedestrian or public transit user, you are very vulnerable. In the evening, if you stand alone at a bus shelter, what do you feel? As a woman, I can relate to these topics, and luckily I haven’t experienced very bad situations but I have experienced intimidating situations. Recognising the strategies that most women have in these contexts is also important. I’ve asked my two boys if they take different cycle routes at night as during the day and they don’t understand why they should, whereas I do, to feel more secure. For example, I’ll cycle where there are more people, less dark corners, or I’ll cycle faster in some places or keep my phone at hand. Those are really important topics we need to think about when we develop infrastructure but also bike share systems for example. With dockless bikes, are people comfortable going to certain places to retrieve them?

When you are out with your children, you are especially vulnerable. I love the feeling of having a child on the front and the back of the bike, you feel so happy and strong. At night however, this can make you feel even more vulnerable. So thinking about routes, lights, bushes, hubs to gather and cycle together is crucial. This cannot be considered an add on. To take these needs into consideration, it’s important to go where people are located to get this information. These demographics are often labeled as “hard to reach groups”. I really dislike this term as it’s really the other way around. The policy makers and planners are the ones that often make themselves hard to reach.

We work a lot with civil society. We’re trying to infuse this type of awareness and push this angle with bicycle advocates. How do you think they can make these demands more inclusive? How can cycling advocates around the world modify their demands to facilitate cycling for all?

I think it’s really important to try and take the perspective of caregivers. You want to connect more with mobility patterns that a lot of women have. So talking about short trips, neighbourhood trips. How can we facilitate that, instead of larger distance cycling projects or architecture projects that look amazing but don’t really benefit everyone. When advocating for certain  things, it’s important to think about who the users will be.

Access our Report on Cycling Cities for Infants, Toddlers & Caregivers