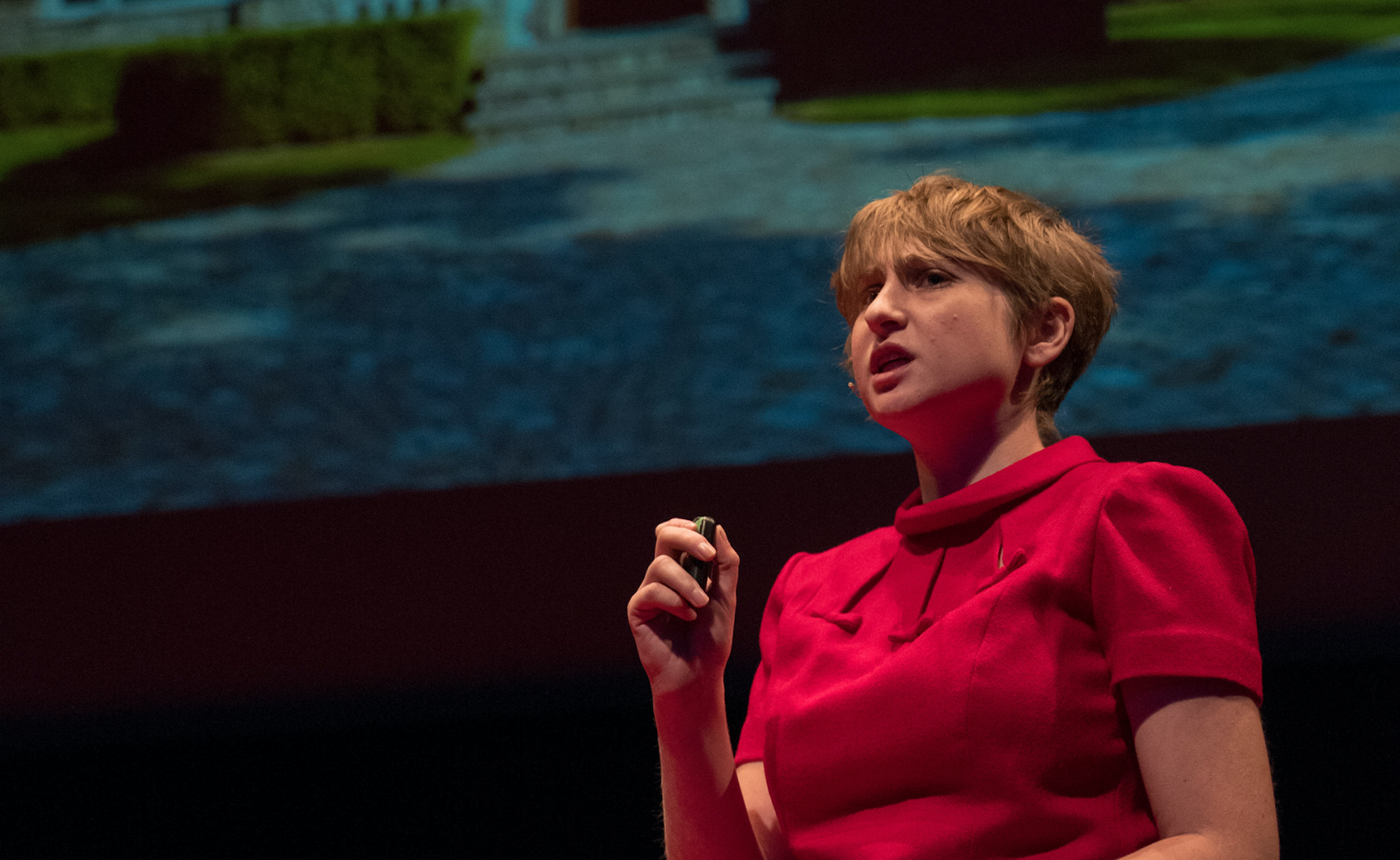 8 min. read
Kate Wagner is an architectural critic and columnist at New Republic. She is the creator McMansionHell, a viral blog that roasts the world’s ugliest houses. In addition to writing about architecture, Kate has worked extensively as a sound engineer with expertise in recording engineering, product development, and research.

How did you become interested in researching urban soundscapes & environmental noise?

Before I became an architectural critic, I went to music school to study music composition, and worked in recording studios. My years as an audio engineer enabled me to go to graduate school at Johns Hopkins to study architectural acoustics. We learned the practical side of the fields, and my thesis research was in concert hall design from an architectural and urban theory perspective from 1960-1986. So much of that period in architecture in the US, Europe, Canada and Asia is defined by urban renewal and large scale city planning projects and that was a huge impetus. I then was teaching a seminar at Morgan State University in Maryland on sound and the built environment, architectural acoustics and soundscapes. That academic field of sound studies was a big part of my education, and it all stemmed from there.

What are some of the greatest sources of noise pollution, and some of the nefarious health effects of overexposure to noise in urban environments?

Excessive exposure to environmental noise can cause everything from lack of sleep, which is associated with a roster of problems, from hearing loss over time, increased levels of stress to cardiovascular stress especially. Importantly, noise pollution varies according to geographies of inequality. It boils down to environmental racism. You have a vast majority of polluters concentrated in small areas that are for the most part economically disadvantaged or have been prejudiced against on behalf of governments and policy for a period of decades. It’s a nuanced, problematic political situation that has unfolded since the dawn of urban industry.

You have explored how anti-noise advocacy has focused on the right to silence rather than the right to hear. Could you talk a little bit about the origins of these quests for quiet?

The historical rise of noise abatement comes with the second industrial revolution. You start to have mechanical noise becoming the largest contributor to noise pollution. Julia Barnett Rice, the wealthy, well-educated wife of a businessman and publisher is at the origins of modern noise abatement. She lived in a mansion near the water in NYC and steamships would make loud horn signals. She founded the Society for the Suppression of Unnecessary Noise her efforts helped pass the 1907 Bennett Act, which regulated the unnecessary noise and whistling of tugboats. This also creates the basis for modern zoning laws, where some areas have limits on noise, leading to the idea of partitioning city land by use.

In the 19th century, streets were very different from how they look now. You had vendors, cyclists, and some cars, but generally it was a free for all. There was an entire small economy of street vendors that depended on access to the street. That included peddlers, organ grinders, performing artists, buskers etc. Of course, this was loud. A general bourgeois notion was emerging from a rising economic class that associated quietude with reverence and superiority to noise. This cultural change in listening plays a part in all of this. The idea that we have a right to silence is a very 19th century, bourgeoisie concept. People didn’t want to hear organ grinders in front of their windows anymore, and their reaction was to call the police on them, who forcefully cracked down on them, beating them until the streets were cleared. There were violent strikes in opposition to this crackdown. The labour aspect of this history has been erased. Unsurprisingly, this is when cars and trucks start to replace people in our streets.

What I mean when I say the right to hear over the right to silence, is that there is something cosmopolitan and endearing about people on the street, making noise, living their lives. With cars, there isn’t any of that. Not all noise is created equal. The dichotomy between human noise and mechanical noise is generally presented, and in some ways it’s also a moralistic binary but at the same time it offers us a framework of analysis for having a little bit more empathy in terms of noise.

What are good sounds and what are bad sounds is an interesting question: the belief that some things are more aesthetically pleasing than others, such as birdsong or a radio playing. We have this idea that if something is natural then it is more fulfilling, but it’s important to look at all the different roles sound plays in our lives. Marie Thompson gives a good example in her book “Beyond Unwanted Sound Noise, Affect and Aesthetic Moralism”. She recounts how a downstairs neighbour wanted to hear the footsteps of their upstairs neighbours because it made them feel less lonely. Foot noise is something that is considered to be annoying but in other ways can be reassuring. So it’s an important critical activity to question what we don’t like about something, or maybe consider that it benefits someone else in a way that could make you more tolerant. Living close to other people is difficult, urban life requires a certain patience, solidarity and compassion. The inability to share the world with others is where it becomes a problem. The desire to cordon oneself off from the rest of the world is antithetical to urban life, and sound is a part of that.

Allocating more space for pedestrians, bicycles, or green space is a simple way to remove cars, hence the noise they produce. Do you think the negative effects of traffic noise could be better leveraged to promote pro-cycling or walkability policies?

I want to start off with one of my favourite anecdotes here. Back in the early 2010s, when the ToyotaPrius was being developed, they were making tests and they made it so quiet that people were getting hit by it because they couldn’t hear it. They had to introduce engine noises into the car so that people were made aware of it. That speaks to so many fundamentals about the car and its infrastructure. Even if we improve the problem of noise with cars, the way we built our societies around cars is something that is still so harmful, even when you eliminate one individual problem.

So in terms of promoting cycling and walking, it’s an obvious answer that people benefit. If you take X amount of vehicles off the street, then physically speaking it will be quieter, but also safer. So yes, there are widely known technical fixes. If you take space away from cars, increase public transportation, increase cycling and walking, it will be more quiet, and cities will be healthier.

It’s easy to say we need more bike lanes and buses, but in the end it’s really about creating more cohesive means of maintaining healthy, equitable city life and asking why that doesn’t happen. The reason why sound is so unequally distributed is because governments and corporations pick places that they know are basically too beat down to fight back. On one hand you have NIMBY coalitions, a very 19th century ideology of control and authoritarian, affluent mentality, and on the other hand you have community activists that have to find against injustices.  A good example from Baltimore is when there was a plan to create an incinerator in a low-income neighbourhood, and they succeeded in fighting against it, it was a big lesson in terms of what is possible through community engagement. In reality, these are exceptional examples and we can’t depend on the labour of exhausted people from preventing injustice from happening to us.

What types of coalitions and stakeholders do you think need to come together to create systemic changes to environmental noise in our cities?

It’s an interesting time because there is increasing research on sound and noise pollution. Before Reagan was president, there was a whole division of the Environmental Protection Agency devoted to this. When he came to office, he ended it, and so much ongoing research was killed. It became atomised and separated from OCHA. This has since been rectified a little bit, but the state isn’t as involved as it used to be. Environmental noise is mostly left to consultants and universities to deal with, physics departments, sociology, acoustics, urbanism and city planning departments.

Sound has always been cross-disciplinary and environmental noise is a clear example as it touches so much upon everyday life. It’s good that there are initiatives and large scale research that are happening again, especially around noise and equity. There have been more papers in recent urban planning journals that track these issues. In order for the most people to benefit from this, it requires organising at the community level, and political power at the neighbourhood level. The means to reduce the space for cars in the street here is a key political issue.

The pandemic was also a big wake up call, things got a lot quieter and prompted us to think about the importance of sound, and question the way we have been living.  I’m sure a lot of acoustic departments are looking at data from the first lockdowns in cities. Of course these studies take a lot of time, you need to constantly take measurements and have historical data. So it’s an exciting period to study sound and an interesting period to be involved in bicycle advocacy.