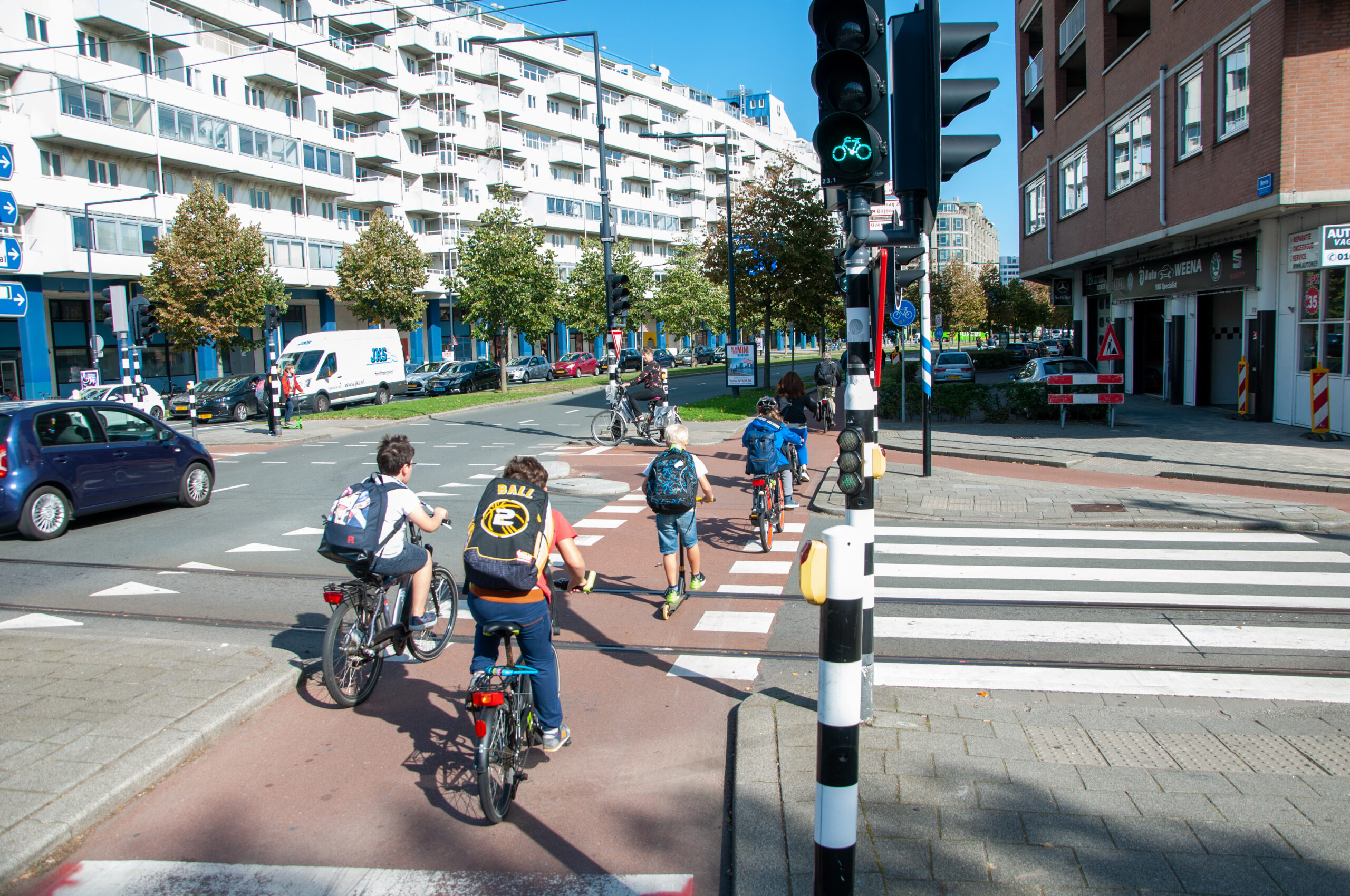 To mark World Car Free Day 2020, Lucas Snaije discusses the need to change our culture of urban transportation from one rooted in regimes of automobility to one where active mobility is the norm.

World Car Free Day 2020 marks the end of European Mobility Week, a campaign to promote sustainable mobility to urban residents and organisations in Europe and beyond. This year’s theme, “Zero-Emissions Mobility for All”, importantly alludes to the need for inclusivity in sustainable transportation policy, and prompts an important reflection in a time where lower socio-economic groups are still disproportionately exposed to air pollution, noise, and high temperatures in urban areas.

In Europe, urban mobility accounts for 40 % of all CO2 emissions of road transport and up to 70% of other pollutants from transport, meaning that a successful modal shift in daily trips towards active mobility will have a significant impact. Increasing the modal share of cycling is largely recognised as a solution which can not only help tackle emissions but also confer a wide range of social benefits such as improved mental and physical health, local economic development, urban resilience, and improved social equity.

At the global scale, the Institute of Transportation & Development Policy estimated in 2015 that a mere shift to 23% of trips by bicycle or e-bike by 2050 would reduce urban transport emissions by 7%, avoiding the emission of 300 megatons of C02 globally. A recent report on the climate change mitigation effects of active travel which looked at daily mobility patterns of close to 4000 people in 7 European cities found that cyclists had 84% lower daily travel lifecycle CO2 emissions than participants who did not cycle. Switching from a car to a bicycle indeed saves 150g of CO2 per kilometre, meaning that every 7km by bicycle saves an emission of 1kg of CO2 as compared to the same distance covered by car. If prioritising walking and cycling in the city is thus so critical for environmental and social advancement we need a radical shift in our culture of transportation and a greater emphasis on including the needs of the youngest, eldest and most vulnerable population groups in the city.

Aligning the Cultural With the Infrastructural

Over the last 6 months, the energy around cycling has surged globally, largely as a response to the COVID-19 pandemic. In Europe alone, over 1000km of new bike lanes have been implemented, with over €1 billion in budget allocated for cycling promotion. While these rapid street transformations are a great leap forward, the facilitation of active mobility predominantly through infrastructural investments falls into the contemporary paradigm of urban cycling transition that revolves around a logic of “build it and they will come”.

This overreliance on the physical, symptomatic of historical policy and advocacy strategies, has been eloquently highlighted by urban anthropologist Dr. Adonia Lugo to be problematic when thinking about urban equity. In her work, she applies the term “Human Infrastructure” to the bicycling community in order to examine the role of culture and social networks in how we relate to and move through our environments. This social dimension helps address the glaring fact that infrastructure does not benefit urban dwellers equally, and for cities to become truly inclusive, the sole reliance on the built environment might not be the most effective strategy. For some cities, the development of open-street events as well as greater support towards community groups and bike shops, earn-a bike programs, educational programs, and awareness campaigns can be strategies to build a more inclusive culture of the bicycle that are too often forgotten.

Interestingly, recent research from the Urban Cycling Institute has utilised this Human Infrastructure framework in the context of “mature cycling cities” such as Copenhagen or Amsterdam, stating that we cannot understand their successes solely by looking at “hard” factors such as urban form and cycling infrastructure but also through the “softer” dimensions of social norms and cultural setting that encourage cycling. Looking at cycling adoption by newcomers to the city of Amsterdam, their findings suggest that the cycling-oriented social fabric of the city could encourage uptake as much as the urban design.

As cities across the world rush to implement rapid changes in their streetscapes in favour of the bicycle, we encourage them to also think about how softer factors can help make the bicycle the preferred mode of transportation for all by influencing norms, habits and attitudes. A cycling boom indeed doesn’t necessarily indicate a cultural shift, as the USA experienced in the 1970s. We believe that alongside infrastructural development, this is an opportunity to shine a light on softer forms of behavioural change and community support, which will be needed to develop such a culture of the bicycle. Just like the uncertain fate of some temporary bike lanes, retaining users and engaging new individuals will be a key dimension to create a positive, lasting change to the way we move through our cities.

Combining behavioural change strategies with infrastructural investments isn’t new, but remains a relative niche. Burgeoning initiatives to increase cycling are however gradually taking into consideration such softer factors. A number of incentive programs have emerged in recent years in Sweden, the Netherlands, France and the UK for example and are proving to be highly successful, alongside growing awareness campaigns about the benefits of cycling. Notably, the ongoing European initiative Civitas Handshake for example includes “Awareness and Education” as a key pillar to heighten the success of infrastructure projects and engage new cyclists. Munich is largely perceived as a leader in this regard. The city’s “Gscheid Mobil” Mobility Management Plan is a strong example of ensuring mobility information and guidance is provided in a tailored manner to specific demographics such as children and their parents, the elderly, as well as migrants and refugees. This encourages different groups to use the bicycle that may not see it as a viable option even in the presence of good infrastructure.

In Gelderland, the largest province of the Netherlands, a shift has also begun to take place over the last two years to centre social targets in mobility policy, particularly in regards to cycling and walking. Budgets have started to be recalibrated to account for these softer factors that encourage cycling, with the understanding that behavioural change strategies can reach broader demographics. As Frank Eggen, Program leader for Traffic and Behaviour for the province commented to us: “we are experts in the construction and maintenance of cycling infrastructure, but the real question lies in usership – who, when and how do people use it?”.

In order for the province’s aims of “accessibility for all inhabitants” to transportation to succeed and eliminate transportation poverty, favouring active mobility for short trips is emerging as a clear priority. For this strategy to function, cementing a culture of cycling and enabling the right conditions for all population groups is key, ensuring that the broad benefits of cycling are communicated adequately. The establishment of “Bike Labs”, that BYCS conducted across the province to increase usership among specific demographics is an example, yet as Eggen notes, “the question is now to scale such initiatives, and move from niche to mainstream”.

There are many further examples of initiatives from across Europe and beyond that engage with the softer dimension of urban transitions towards cycling, yet budgets and promotional campaigns still predominantly rely on the celebration of infrastructure. They are also somewhat isolated initiatives, that have not engaged with a transportation culture shift on a larger scale.

Exploring new avenues for nationwide or regional campaigns to change our mobility paradigm from a regime of automobility to one that favours walking and cycling appears both urgent and necessary to truly achieve significant changes in the congestion and pollution of our cities. A striking illustration of the impending shift in mobility culture, and the resistance to it, can be captured by the French advertisement regulatory body’s recent ban of Dutch bicycle manufacturer VanMoof’s campaign film depicting a car melting, and a bicycle rising from the pool of molten metals. In a time of climate emergency, these campaigns should be promoted, not censored.

So as we move towards “building back better” through cycling, let us not forget the emotional angle to incentivise cycling, and that alongside transformations in our urban form we need to work to change our culture of daily mobility. By implementing multifaceted strategies that both reshape our cities to prioritise pedestrians and cyclists while also increasing communication around the social benefits that the bicycle can bring to our societies, we can normalise a more sustainable, healthy mobility lifestyle for all urban dwellers.