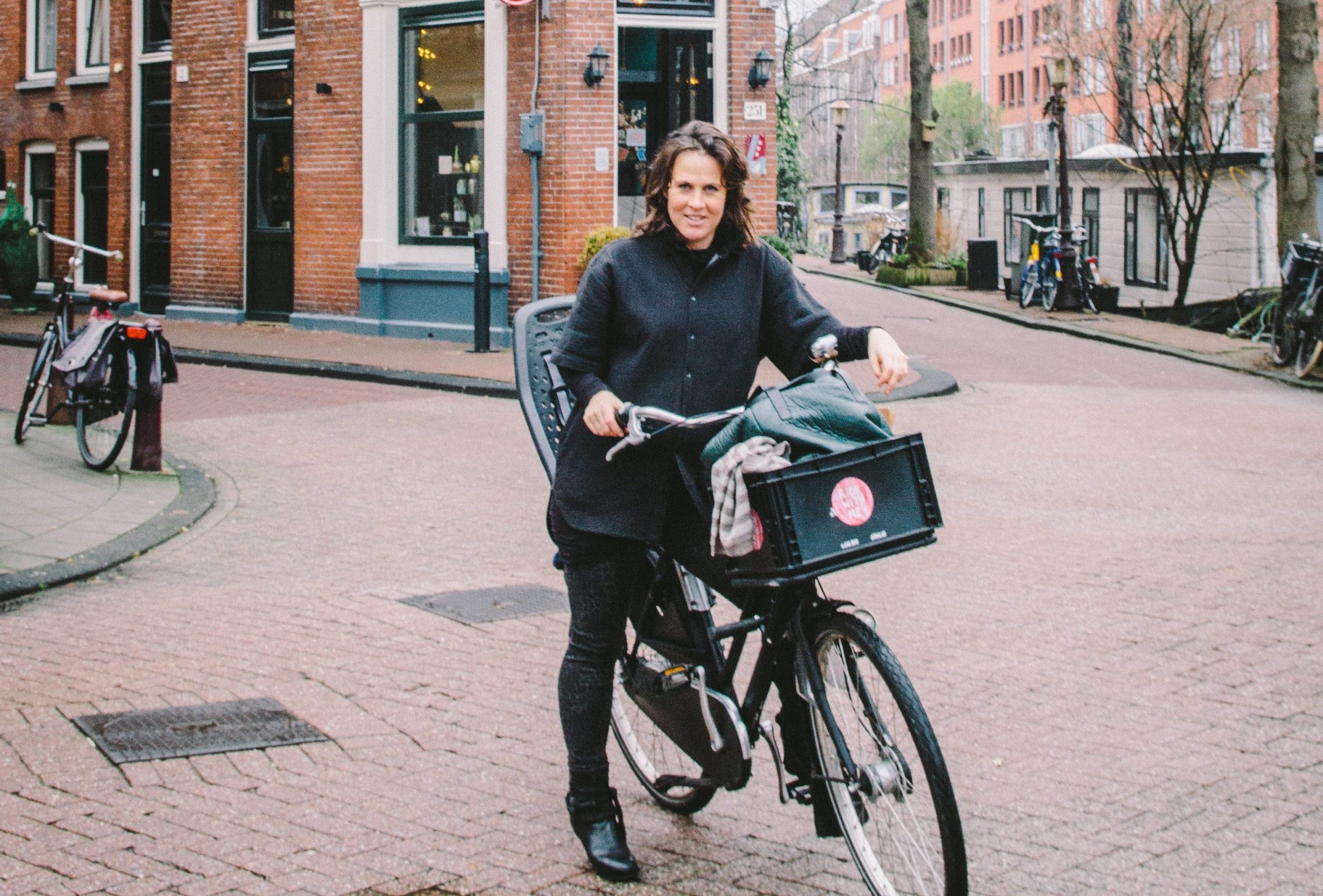 9 min. read
Katelijne Boerma is the second Bicycle Mayor of Amsterdam since 2017, focusing on bicycle fun and safety for kids, stimulating cycling in different communities, and creating ‘bike decency’ among Amsterdam cyclists. She has a background in physical education and educational science, and is the programme manager of International Sports Management and Business at the University of Applied Science of Amsterdam.

How does the bike contribute to your physical and mental wellness on a day to day?

Cycling makes my day, in every way possible. It connects all of the dots in my life whether that be the mental, physical or economic aspects. Without my bike I wouldn’t be able to achieve my work. It is central to my daily life, and I consciously chose it to be. I wouldn’t want to commute long distances for work as I want to be able to use my bike.

I think people have several layers to their identity. You have your professional life, your personal life, layer after layer and they all play a role in the decisions you make. My role as a mum and my relationship with the bike are closely connected. The bike allows me to be who I want to be as a mum. Then as a professional, I need a bike as I like to cycle to work. I can’t imagine that I would have started doing my second degree if I couldn’t cycle. I felt capable of doing so as I could cycle to the university after work.

You are a great advocate for cycling as a tool for kids’ independence and happiness. Could you expand on this?

There’s always tension between left and right wing political parties, however, the happiness of children is never fought about – its importance is something we can all connect upon. At a high level, people want good things for children, and there are multiple interpretations of what this means in practice. The good thing about programs like the Bicycle Mayor Network is that we can function as change makers above the political parties.

The more intrinsic notions behind my work is that I am a mother. I have three children. It takes endurance to ensure that, by the time they reach high school, they are independent and competent. That involves having travelled many kilometres during their upbringing so that they are accustomed to do things like cycle long distances through the rain. If this is incorporated into their upbringing, then they carry it to their everyday lives when they grow up. It gives them the opportunity to cycle daily for the rest of their lives, not simply to pursue a sporty lifestyle, but for so much more. If you are used to cycling for a couple of hours you can easily do other equally as active things. I think  that in a way, cycling helps you overcome several barriers.

Youth are leading increasingly sedentary lifestyles. What role do you think bicycles can play in facilitating a more active, daily lifestyle?

Active mobility can help you see the act of travelling from a different perspective. Especially with the rise of the e-bike which enables people to travel further and quicker. We talk about sports so often and people regularly worry about not getting enough exercise. They then for example decide to go to a spinning class and ironically drive to that spinning class. The solution is often right there in front of us. If you use the bike, you touch on so many of these aspects. It’s not only the physical aspect but also the economic aspect. You’re often faster on a bike, you’ve dealt with your daily need for exercise. At the same time it’s greener, there’s no carbon footprint. You connect all the dots. If you drive to a spinning class, then you lose all the other aspects.

I approached my university and told them they needed to spend more money on bikes for employees. They did, they raised it to 1500 euros per person. This will then nudge behaviour change around mobility. For example, if the employee lives in Haarlem and needs to commute to Amsterdam, the 16km could now be achievable by e-bike.

What we know from research is that, if you don’t do anything active before the age of 12, then it’s highly unlikely you will ever have an active lifestyle. We need to focus on those under 12 in a holistic way. It’s not enough to play hockey to which your mum drops you off and collects you by car, and then you don’t do anything else for the rest of the week. That’s too narrow. I cycled a lot when I was a kid. 15km, 20km was nothing to me. Before the age of 12 I didn’t have the opportunity to travel by car. It’s no coincidence that I have an active lifestyle now.

What are some challenges that you see in regards to cycling adoption?

Do you have the memory of feeling free as a child? A problem is that if the parents don’t have the memory of feeling free, they won’t act accordingly. That’s a problem even in the Netherlands. Often, if you talk to someone from a different background, they don’t see the bike as a solution, as something that makes children fit and happy. I was at a convention last year, and I spoke about the role of the bike in saving the planet. This was in front of city planners and mayors from around the world, some from mega-cities. Afterwards, a few came up to me and commented on the fact that they had never thought of the bike as a means to solve economic issues, environmental issues and so on. Because it was invented over 200 years ago, we take it for granted. We see it as an old school invention, a poor man’s transport.

Here in the Netherlands, the richer you are, the more likely you are to cycle. In most other places, it is the other way around. Although this is rather complicated to explain why, in essence it relates to an egalitarian way of organising a society. If you have a more egalitarian society, you’re more likely to use the bike.

Do you see an opportunity for cycling to facilitate social play and increase interactions within the community?

In many parts of the world, the life goal of many is to purchase their home outside the city, surrounded by a big fence. People that do so are often extremely lonely. Yet this is what many people aspire to. When you are in a car, you no longer have that spontaneous connection as you travel. You get asked about the happiest times of your life and often the answer is ‘at school’ or ‘at college’ as it’s here where you experience those spontaneous social interactions. In the car, you are also often alone. That doesn’t benefit your mental health and it definitely doesn’t benefit you economically. With so much distance between home and work, our commuting patterns are becoming ineffective.

I live in the north of Amsterdam where there are low cycling rates. There’s free car parking and lots of space. We have more deprived areas in the north so the car becomes a status symbol. But the moment you have a community of people, you cycle together. For example, people will call me up in the morning and ask me to cycle with their kids to school. The other day, I picked up some friends’ kids from hockey and in total there were 10 kids cycling in a stream behind me. It was so much fun. You could never do that with a car. When I needed to cross the road, I would just stand and block the road and allow them to cross. All the kids were laughing and chatting about the cycle ride when they got back home.

How do you think advocates can better communicate the benefits of cycling in terms of physical and mental health, to their communities and to their local governments?

What is most important I think, is storytelling. You need to see it. That’s what Bicycle Mayors do. They share all these positive stories.  We need to bring back memories and recognise the joy and independence cycling can bring. Making role models shine is so important. This doesn’t always come from the Bicycle Mayors themselves as they often represent a certain kind of individual. That’s why for me, having Junior Bicycle Mayors that represent the voice of children is important.

Bicycle advocacy that includes good marketing and communication is also important. You need to think like a strategic marketer and make sure people fall in love with your product. The problem with a lot of bike advocates is that there is a lot of fighting involved. This is often necessary because it’s the way to address the political side of things. However sometimes you need to create longing from people. You need people to believe it is what they want for their kids. You need them to see the convenience of it too. For example, the ease of getting a kid into a bike seat and setting off versus the scramble to get a kid into a car. That is where storytelling plays a role in awakening people.

Thinking about the happiness it brings is important as that offers a human-centric approach. That is by far the best weapon as happiness is something that we all want. It gives you the opportunity to rise above the political parties. It can become political, but the happiness of children and the happiness of adults is what connects people from all over the world. It doesn’t matter what country you are from. It’s a global understanding and it’s what we aim for in life, and I truly think the bicycle can save us.