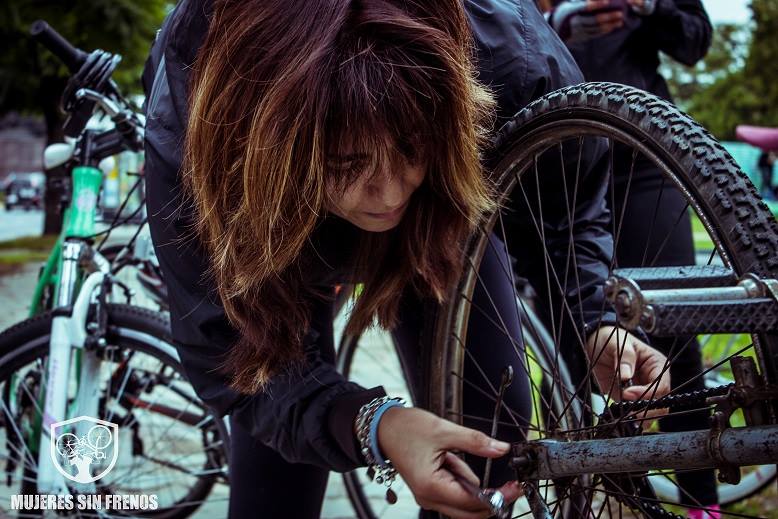 How did you get involved in activism and how do you see your roles as both a cycling and feminist activist intersect ?

I have been a feminist activist for many years. I’m originally from a province in the north of Argentina, where it was very difficult to be a feminist activist, so it has been a long journey to where I am now. Feminism movements in this country are so diverse. Now I live in the capital Buenos Aires and there is a different perspective than in other parts of the country: claims are more advanced and demand rights for different populations. Argentine feminism is very inclusive of these differences and of diverse perspectives.

I’ve experienced the progress and the advances in the discussions we have had, and the conquest of more and more rights over time. Within the feminist agenda, however, I believe we need to push even further the question of women’s ability to enjoy public space and identify with cycling cultures.

Women cyclists and feminist cyclists have an important role to play in the the movement to recognise the rights of cyclists but also the right to enjoy public space. Feminist cyclists have also done a lot to put our male colleagues in discussion, especially surrounding the connections between access to mobility and public spaces in the city. It is the feminist movement who has brought to the fore these questions of space, vulnerability of cyclists, and who have drawn to attention the needs of children in the city for example. The achievement of feminist cities is not just a women’s issue as some people sometimes say, it is a struggle that highlights many important topics for the benefit of the entire society.

How can the transport sector better integrate a feminist lens in its approach?

I believe that those who study, design, generate and implement urban policies have to be in constant dialogue with social organisations and activists in order to understand the diversity from which we come from and the particularities of our urban experiences.

There are interesting cases in cities such as Bogotá for example, where activism has played a critical role in reclaiming the streets and generating a strong cycling culture. Governments have to develop spaces for real dialogue and citizen participation. Often, feminist groups are not invited to these discussions. Our government leaders are men who do not take diversity into account and similarly, a lot of social organisations are led by men, making it difficult for those whose voices should be heard the loudest to enter these spaces and participate. If you are not sensitised from a gender perspective these conversations will not be successful.

Our urban policies also need to think beyond people who live in privileged areas and follow traditional commute patterns. They need to invest in lower-income areas with basic infrastructure, lighting for example but also rethinking what urban wellbeing might mean in different communities. In this sense, it is important to create diverse dialogues, always including feminist and broader gender perspectives. In our fight for better transportation, we must also broaden the discussion to think about what kind of city we want beyond urban mobility.

Feminists know profoundly that we must occupy and win spaces in the city in order to be heard. A core denunciation of our movement is that our bodies have been territories of violence and occupation. Linking this to the urban, if the territories of public space are not occupied and won, it is impossible for our cause to be visible as it needs to be. Often, cycling groups only talk about traffic or cycle lanes but when there is a diversity of issues and perspectives that is put into play, the results are much more impactful and socially transformative. Feminism is a creative, rigorous, and fun movement that has a lot to add to the work of organisations in all fields.

You were part of Mujeres Sin Frenos, a group of feminist cycling advocates that were very vocal on questions of access to public spaces. What were some of its core principles?

It was such an interesting project. We were a self-convened group that brought the voice of the feminist movement to the cycling community. The organisation has since mutated, splintered into several new groups that I no longer belong to but still uphold the same principle of leveraging the bicycle as a tool for the social transformation of cities. A tool that generates calmer, safer cities, economic autonomy for women and personal security in situations of harassment in the street. The bicycle indeed generates moments of freedom but it also can provide needed escape and security in moments of vulnerability due to its speed and agility. It is easier for women to escape danger by bicycle than on foot.

Furthermore, the presence of women on bicycles in a city creates a perception of safety in terms of transportation and the vibrancy of public space. When a city is comfortable for women, children, disabled people, or people with limited mobility to cycle, it is a message that the more vulnerable users are prioritised. It is a message for other road users to slow down and act with care in a space that puts the wellbeing of people first.

Unfortunately, urban policies do not act in this sense. As Mujeres Sin Frenos, we uplifted women to cycle and acquire mechanic skills or provided information on which community stores to go to. We always worked in networks, working in solidarity to empower our fellow women and promoting autonomous travel in a way that could only be generated by feminist movement.

The question of access and education is central for everyone to benefit from cycling, leading you to create CicloFamilia. What are your thoughts on this, especially, in the context of a post-pandemic urban revival?

CicloFamilia was the first bicycle-education school for adults in Argentina. Created 8 years ago, it has been on standby for 2 years but we have been thinking of reviving in a post-pandemic context. Before its inception, we had been raising the issue of children’s inclusion in transport planning. Infrastructure projects had very little in relation to the trips taken by youth and transportation strategies related to cycling basically catered to single, wealthy, heterosexual males that had mobility rhythms that consisted of going from work to home. New projects did not incorporate the needs of families. At that time in Buenos Aires, around 2007, we were even judged for taking our children around on the bike. We were told that it was irresponsible, whereas today we know that cycling is a very empowering mode of mobility for caregivers and good for the development of young children. So we started to conduct group rides in the neighbourhoods with children to break the stigma.

It was at that moment that we realised many people did not know how to cycle. People told us they were missing out on being able to enjoy the city from another scale because they didn’t know how to ride a bike or did not have access to one. CicloFamilia was a grassroots response to this. More than 350 people passed through our school, 70% women. All our activities were conducted in solidarity, with our own bikes, and on our own time. We invited the government to help us scale it, by helping us provide more class hours and gain access to more bicycles but at that time we were told it was not possible. We inquired and asked the question “who will be the cyclists of tomorrow if we are still facing this problem today?

Today in the context of COVID-19, I want to bring this issue to the fore, as a challenge for the government. The city we live in post-pandemic will be different. People want to ride a bike but they don’t know how to ride a bike. The state must accompany people, subsidising access to cheap bicycles, providing education, more secure parking facilities and general awareness alongside infrastructure. There is also a major data gap that needs to be addressed. The data we have is outdated and only uses bike share data for example, which does not reflect the realities of cycling communities here.

A city designed for cars does not allow for the enjoyment of public spaces by children. We have created cities where our message to youth is “be careful”. Be careful that a car is coming, be careful that the street is dangerous, always be careful. We create a way of thinking that deters from going out and enjoying the city. We need to change this perspective and messaging. I truly believe that for a cycling culture to develop, activism must be front and centre, promoting a diverse, inclusive agenda so that every person can identify with this mode of mobility. Governments need activists to be able to generate dialogues and new thoughts from civil society about the fabric of the city.