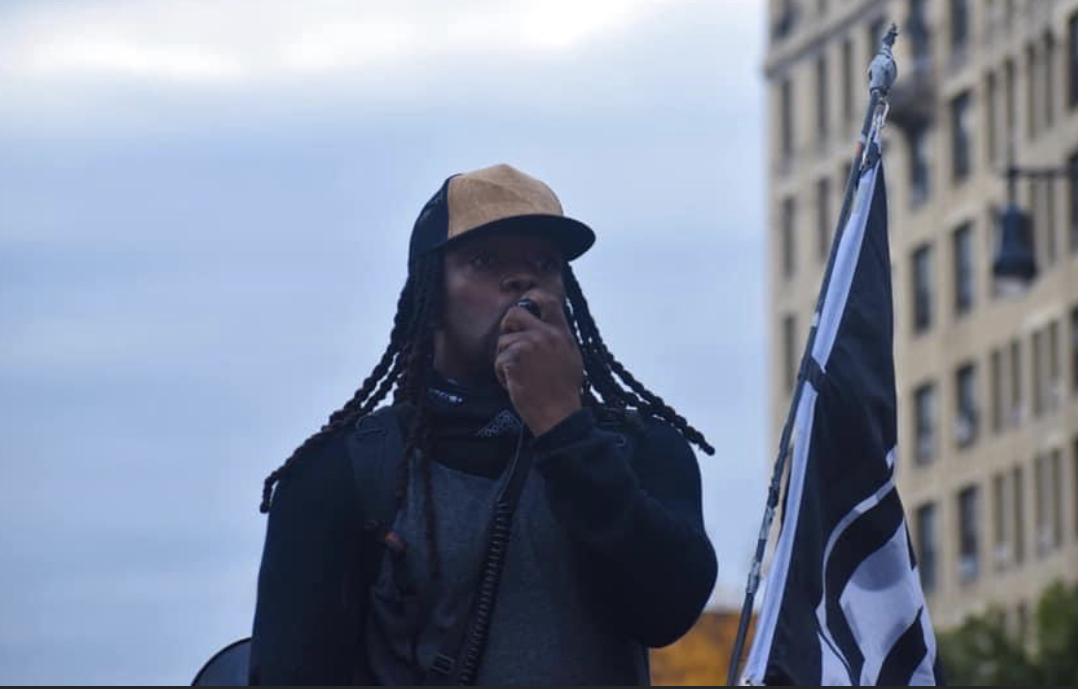 8 min. read
Peter Kerre is a DJ, activist, community organiser, cybersecurity expert, and co-founder Safewalks NYC and Street Riders NYC, the movement that led 10 000 cyclists on a BLM protest through the streets of New York City in 2020.

Can you tell us about the origins of Street Riders – how did the group get started and what were its aims?

The amazing thing about Street Riders is how organically it was formed. Nothing was planned whatsoever. Interestingly, none of the founders have even historically been avid riders. When the pandemic hit New York, a lot of folks were trying to move around and get from one area to another but felt insecure riding the trains, so, similar to other parts of the world, they started using bicycles more. Then the George Floyd killing happened, people felt enraged and protests broke out.

Now as someone who’s also from Minneapolis, as someone who’s been an organiser there, and as someone who’s had Minneapolis Police knees on my neck and been roughed up by them, it was very personal for me. NYC had been hit very hard with COVID-19, and I just didn’t want to risk spreading anything to any family member. I had to force myself to stay in New York City, even though I wanted to be on the ground with my folks out there, and I started going to every protest I could, using a standing electric scooter I had bought during the lockdown.

A few folks on bikes began rolling with me and we began going to many different protests. We’d also help link different protests together because we were very mobile, and provided traffic safety at intersections. I also started recognising other groups of cyclists who were going around protests, so we began hanging out and deciding together where to ride the next day. And that’s how Street Riders originally began to form.

More and more bikes joined us, rolling to where the protests were taking place, supporting where we could with supplies, logistics and communications. We started speaking more about creating a more formal protest group. We started telling folks to meet at Grand Army Plaza. When we began, it was just 5 of us and, next thing you know, our numbers were in the thousands. It was a powerful protest, it became massive and, throughout, we were able to keep it very welcoming. Some people joined us without even knowing what this was about and then became educated about the cause and, through their networks, the growth became organic and exponential.

It was a beautiful thing. People in the thousands were riding their bicycles but also rollerblades, skateboards or scooters and without any judgement. Our line of riders could cover large areas of the city more rapidly. It was so large that it would pass in front of people’s houses for more than 15 minutes, and people would just run down with their bicycles to join us.

Because we were riding, we could also access areas of the city where people had never seen protests before, and that was so powerful. Especially when we were riding to the low income neighbourhoods, locals were so happy to see so much support. They’d be cheering, people would be crying, young kids with bikes would be joining us as well. It was truly a safe space. These moments have given my life meaning. I often tell people how we feel being Black in this country, is not that complicated to understand. We feel hated, we feel like almost everything is against us, and that almost everything we do is used as a weapon against us. When we see things like this and we see people appreciating us, seeing that our Black lives matter, it’s heartwarming. We have created a space where people feel a sense of belonging, people want to join our movement.

Speaking from an educational standpoint, we were able to show our riders that there is a very big discrepancy in cycling infrastructure, quality public space and transport infrastructure more broadly. We were riding on the main roads, so we were able to see how in wealthy neighbourhoods, the roads are smooth with wider cycle lanes and getting to the low income areas how terrible roads are, with no bike lanes. This is a very big problem we have in NYC. I know that we have several bike advocacy groups that work around the clock on such things, but the problem is that most of their wins start with gentrified neighbourhoods, you know? There’s very few people who are speaking for Black voices as far as infrastructure and transport are concerned.

Another thing is that many people who had never been to some of the neighbourhoods we cycled through, held this preconceived image of them as some crazy place with shootouts and with angry people but then saw people were friendly, saw kids playing, people smiling. It was eye opening, for such a large group to understand that brown and Black people are just everyday people that also deserve to enjoy public spaces. It’s been a very powerful journey which is still ongoing.

A strong community has been created around Street Riders. What is your vision for the future to keep the movement going?

We always want to remind ourselves that we were formed for the fight of Black lives, so that’s one thing we always want to assure to centre ourselves around. Many times people ask about our plans in regards to the cycling community, the cycling infrastructure. I always emphasise that we formed because of the fight for Black lives and so whatever we do in the future in terms of training or education will be related to the struggle for Black lives. It doesn’t mean that we will forget and disregard riding. We are a group that operates with compassion, we’ve since been to places where bike lanes are terrible or aren’t clean and we helped clean them. In the end, we do less talking, and we act more. So, our vision is of course to continue the fight for Black lives, it’s a long journey.

At the same time, there are also challenges we need to address and are not limited only to Street Riders but with every single organisation in the Black Lives Matter movement. We have a lot of allies joining us which is great, but undoing racism is a process: it’s not an instance and it takes a while. Due to the scale of our organisation’s growth, there has been some infiltration of white supremacy and privilege into these Black spaces that have caused harm to people of colour. Many times it’s been unintentional because I personally believe that people join such a movement out of good will and and to create change, but do not try to examine themselves or question themselves enough. There have been instances of white fragility and self-centred behaviour when people, who are supposed to be allies, have been corrected and then became vengeful instead of understanding what is happening. If you are truly an ally you need to listen to black people, you have to accept and acknowledge black leadership.

Most of all, now that everything is opening up again, people have simply gone back to their regular lives. We’ve always been aware that many people were riding for the sake of just riding and with ten thousand bikes we could tell that, you know, not everyone is there for actual change but as a means to get out, you know, unfortunately that is sad but such is the nature of things. When something grows that big it’s just beyond your control.

Right now the numbers during the mass rides are way less than they were last summer but we still have a strong support base that is ready to deploy. We’re humble and we’re grateful for that. We have had solidarity rides for Palestine and Colombia supporting those rallies, and I took a back space, giving the podium to our riders who are Colombian and who are Palestinian or from the region, to talk about what’s happening and tell us what we can do. We’re not so hungry for power visibility, we’re all about the cause, the mission and the people, and so that principle has really helped us keep running this long as well.

You also have founded Safewalks NYC, a network of verified volunteers to help people get home safely. Can you talk a little bit about this initiative?

Safewalks is a public safety initiative that began by the people for the people, whereby we escort people who are feeling unsafe, from a source to a destination. We began in January 2021 and it’s really gone viral a lot due to the prior success of the Street Riders initiative. We have a team of over a hundred volunteers right now and yeah we’re getting a lot of media press, a lot of people from around the world have been reaching out to us asking how they can expand Safe Walks initiatives into their countries.

Our volunteers are mostly people who were part of the Street Riders community. Bicycles provide us with greater mobility and become a public safety tool as they allow our volunteers to be deployed faster to where a person is calling or coming from. Bicycles allow to cover a larger space in the neighbourhood and be a real presence for our community members. When we think about removing funds from the policing and reinvesting them into communities, this is one example of an initiative by the people for the people that would be worth expanding more into.

To enable this to scale, we want to develop an app to not only be a public city tool but to have social networking capabilities, so that anyone who’s using the app can form their own Safe Walks initiatives and communities. Ultimately, whether it’s with Safewalks or with Street Riders, I’m trying to see how technology can enable these grassroots initiatives to scale. We’re always asking ourselves what we can do next, how we can amplify what we are doing for our communities.