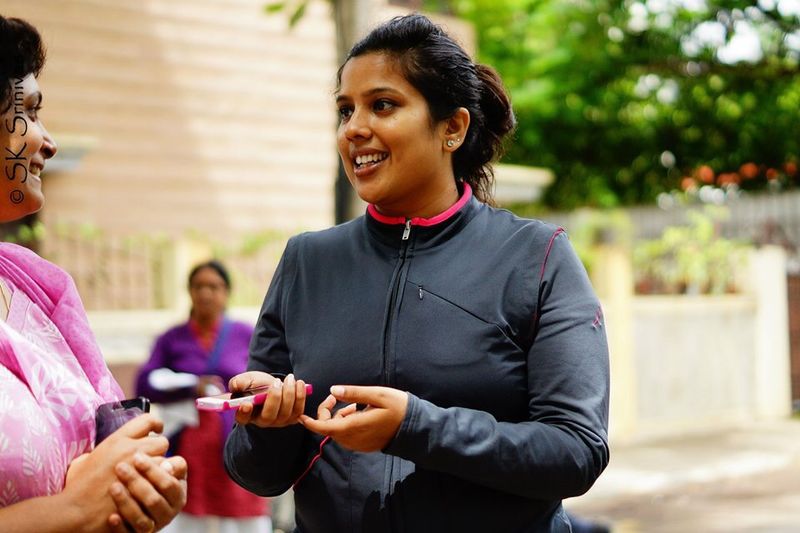 7 min read.
Sonal Kulkarni is an architect and urban planner based in Bangalore, India. She is a director at UrbanMorph & leads Strategic Partnerships and Communications at the BYCS India Foundation. Sonal is a force in promoting a culture of active transportation in India.

How did you become interested in urban planning and active mobility more specifically?

Throughout my training to become an architect I realised that my real interests lay in how a building is placed in the context of a city and how the city behaves rather than on the mere aesthetics of the structure. This led me to study urban policy planning at the University of Southern California. Los Angeles is so infamous for all its urban experiments. It is a perfect example of a city one should not build and at the same time it has so much diversity, innovation, and so many other elements which make a great city. The day I landed in Los Angeles, I could only see parking lots from the plane. There was so much concrete sprawl. I remember almost crying because I didn’t see a soul on the streets of the city on the journey from the airport. I questioned what made the city develop like this, and the answer was clearly it’s vision of transportation, and I became interested in how such a car-dominated urban paradigm could be undone.  When I came back to India I found this very nascent and new organisation called the Directorate of Urban Land Transport, where I worked on making mobility sustainable in cities across the State of Karnataka. It was the beginning of a wonderful journey. The department needed young blood, people who thought differently than how engineers traditionally did in Indian cities. My role was to build awareness around cycling in the city so the first project that I was given was to create an open street event for Bangalore. We called it “Cycle Day” and really made the planning process in conjunction with citizens and the citizens groups. From there I became interested in how to build communities through better transportation.

You now live in Bangalore, the fourth largest city in India. Can you briefly paint a picture of mobility in the city, and the potential for active mobility in particular to grow?

Bangalore has a population of around 12 million, the city boundary that comes under the council is around 800 square kilometres. Within the city the modal share is split between, over 30% of trips by public transportation, mostly through the bus system, 30% of trips walking, around 5% biking, 10% by private vehicles, and the rest divided between rickshaws, private two-wheelers, private taxis.

The city is the Silicon Valley of India, and many people currently understand the need for sustainable transportation. What has happened however is that the city has sprawled. it has grown over the past 10 years in a way that didn’t think about how people would move around. When the land is bought by a real state developer there is no part of the master plan development of the city on how people are going to travel and how travel risks becoming unsustainable because of this kind of growth. So no plans were in place for example developing metro or for doing bus rapid transport systems during this period of sprawl.

On the other hand, it’s the perfect city to cycle in. The weather is pleasant almost 12 months in the year for example. The city is also nicknamed the “Garden City” of India as it was built in a way that every locality had a park. There used to be around 2000 planned lakes in the city but due to the greed of developers, today there are only 100 or 200 only. The city stands at 931 meters above sea level and due to these lakes the city is highly resilient to floods. It was beautifully designed, the lakes were planned in such a way that they flood into each other. Real estate greed during rapid growth has unfortunately damaged the city.

The cycling community has been very active in Bangalore over the last 6 months. Can you touch upon a some key initiatives to promote the use of bicycles during the pandemic?

We definitely saw an opportunity to show the bicycle as a way for people to stay healthy and safe, but also as a way of helping the relief effort to people in distress.  For example, we know that the coronavirus is affecting senior citizens more than anyone is and these are the people who won’t be able to go out and buy essential goods like groceries and medicine, and are not very savvy to order online.

Sathya Sankaran, the Bicycle Mayor of Bangalore had the idea to distribute such goods to people on bicycles at the centre of this whole pandemic through the “Relief Riders” initiative. Doing such deliveries on the bicycle provided a new perspective on transportation and logistics. From there, the “Reset with Cycling” campaign emerged. When the lockdown was becoming more loose in cities, there was a risk of losing new cyclists. So we thought it was important to start a campaign which actually told the government and any other stakeholders responsible for providing infrastructure in cities to reignite city life through cycling.

We grew this campaign in many other cities and other Bicycle Mayors across India, it truly became national movement. They helped create an online petition which could be given to the Ministers and the Disaster Management Department and eventually was also adopted by the Cycle 4 Change Campaign, a government led national initiative to promote cycling.

One major initiative in the works relates to one of the ring roads in Bangalore around which most of the large IT companies are located. Due to the high volume of commuters, it is one of the most congested roads in Bangalore. A bus priority lan is being planned by the city’s bus operator along with the Directorate of Urban Transport but since the recently appointed transportation commissioner was appointed saw what Sathya Sankaran’s cycle to work data provided and she suggested piloting the first first pop-up bicycle lane as part of a COVID recovery plan. The work on the road has already begun and we are collaborating with Bangalore Smart City to identify other stretches of streets that can be redesigned with bicycle infrastructure.

Ensuring the accessibility of public spaces is a critical dimension of making cities equitable. When we engage with in advocacy we are always conscious that certain demographics use and can access bicycles differently. From your perspective how do you see active mobility improvements and in particular bicycle usage as a way to address economic and gender equality in Bangalore?

There are a lot of people in Bangalore that fall into the category of “Livelihood Cyclists”, that is who can’t afford any other mode of transportation except cycling. For that segment we are doing surveys to understand where these cyclists predominantly travel from so we can identify opportunities and provide better infrastructure for them. These users are using the bicycle as their mode of transport without any push as they depend on it. So it is important to provide them with better, comfortable infrastructure in a strategic manner to ensure their safety.

In regards to gender equity, our strategy is trying to make places safer at all times of the day by providing better street lighting, and developing more holistic placemaking strategies. In India we have places that are bustling during the day and dead at night. Women feel unsafe even during the day and especially on a bicycle. I’ve heard many women speak about the fear that they will be hit by vehicles  but also because some of them fear they might be mobbed. We also feel there needs more thought in providing infrastructure that women feel safe to cycle on on because they are a demographic that has a strong influence on family. More generally though, we are striving to work with a stronger gender equity lens in urban planning and to design cities that are safer for women.

How have you experienced incentive programs or behavioural change initiatives alongside infrastructural development to create a culture of cycling ?

Bangalore is quite a progressive city. Many officials are very active in regards to cycling even in the context of political pressure of some decision makers that don’t understand the societal benefits that accompany a more cycling-friendly society. Behaviour change initiatives are a slow and gradual process. Several city departments and people like Sathya Sankaran have gained some good ground however. The Cycle to Work initiative and its leader board is a tremendous campaign. Gamification is interesting as it makes behaviour change a collective issue, not an individual one. How to make certain people incentivise others around them such as colleagues, peers or family  to get on the bicycle, is the sort of organic shift we want to achieve. The Cycle to Work platform thus ranks companies and not individuals by trips travelled by bike, not distance covered. It’s more about how frequently you choose the bicycle for your trips than how far you go.

In the end, this whole movement is about influencing people and their lifestyle for the better. People need to make their mobility choices intelligently, thinking about the environment, the city and its quality of life. There are so many indirect benefits of a more walking and cycling city, and people need to realise this more.