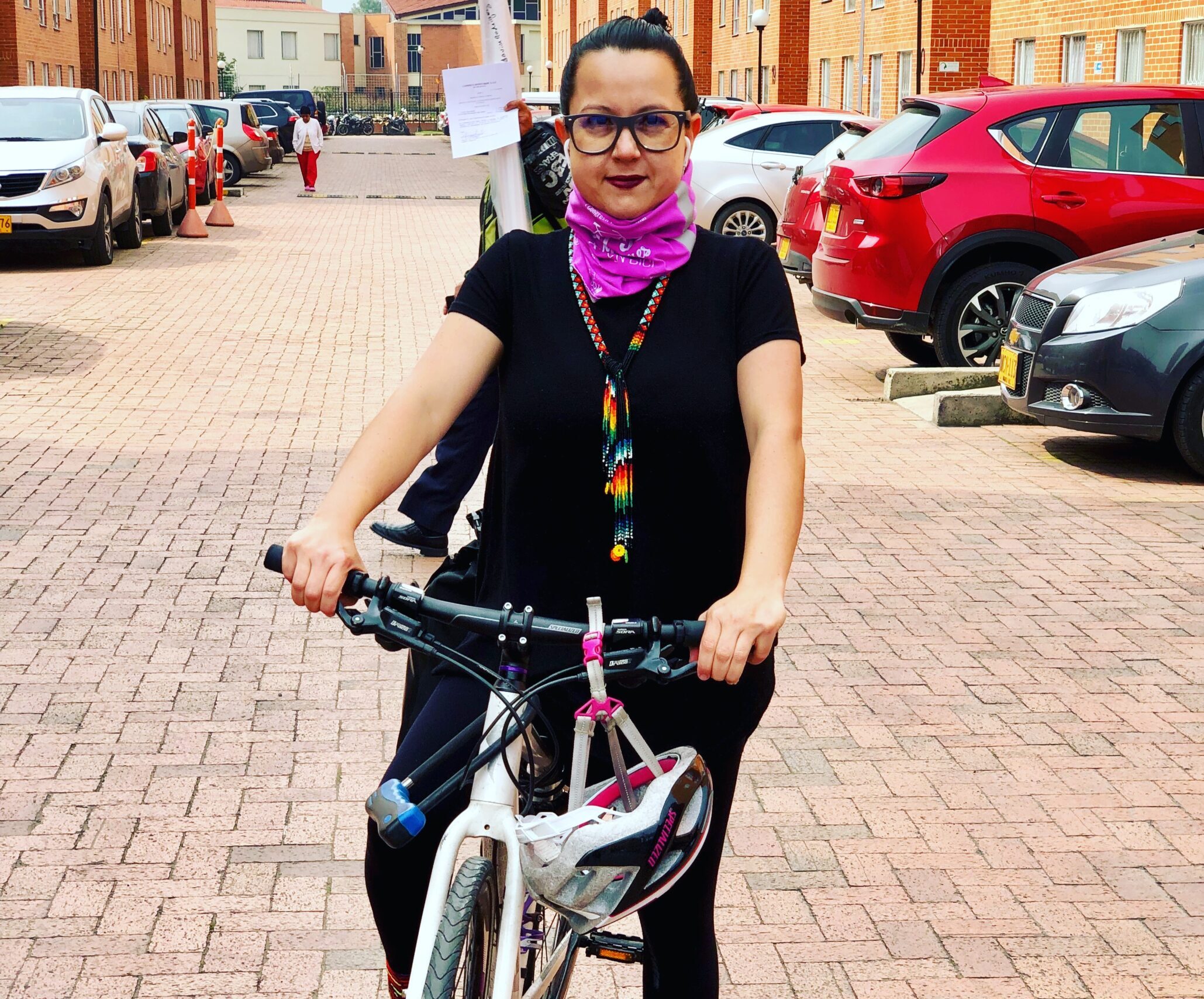 8 min. read
Andrea María Navarrete Mogollón is practical-theorist cyclist, cyclefeminist, flâneuse and social researcher. She is the founder of Mujeres Bici-bles. In 2020, Andrea Maria was selected for TUMI’s Remarkable Women in Transport.

How did you first get involved in activism, and how do you see the intersection between cycling and feminist struggles?

I got involved in activism in 2012, but have been riding a bicycle for 18 years. It was when I started working in my home city of Bucaramanga that I bought myself my first bicycle. I was never given one at home. Instead, I got things like dolls or a kitchenette, toys that somehow aimed to ingrain a future domestic life and motherhood, which to this day I have not engaged in.

Cycling allowed me to really observe the city from a different perspective and understand how space was distributed within it. During that time, I came across signs that prohibited the use of the bicycle in so many places, and couldn’t comprehend why this mode of transport was prohibited. Being a cyclist, I quickly found community, and we created a civil society organisation that asked for cycle routes, space to move safely, and coordinated the city’s first Ciclopaseo.

I subsequently came across a leadership conflict with a man in the organisation, which was a horrible experience. I was very active in networking and speaking out, and being a woman on a bike I got a lot of attention, which created jealousy. The man in this movement was very violent with me, he took away my passwords of our social media accounts and rallied others behind him by saying I was damaging the organisation. I was sidelined, and felt so confused, internally conflicted and most of all angry.

One of the women in the group was very supportive, and we decided to continue our work focusing on women, which led to the creation of Mujeres Bi-cibles. The first thing I did was find out what it meant to have a women’s collective. I encountered organisations like the Macletas in Chile, the Carishinas in Ecuador, the Mujeres en Bici in Mexico. I contacted all of them, they told me about their various campaigns such as cycle lessons for women or encouraging thinking about the city from the perspective of the women.

I became obsessed with the bicycle. I wrote my masters thesis on the metaphysics of the bicycle, including a chapter on the subject of women and bicycles. I began to travel, speaking at congresses in various countries. In January 2016, I sold all my belongings but my books and, supported by the bicycle brand Specialized, embarked on an 8 month journey throughout Latin America, where I connected with cycling movements in cities that I travelled through and helped form women’s cyclist groups. In some cities, local Mujeres Bi-cibles chapters have been created or sometimes under entirely different names. It was one of the most wonderful experiences of my life. I also eventually travelled across 27 cities in Europe, presenting a talk called “Anachronism, diachrony and synchrony of women on bicycles” and giving bicycling lessons to women.

All these experiences have led me to understand that the bicycle is feminist par excellence. It is a vehicle created for women to begin to move independently, which gives the most sense of freedom, joy, and emotion. It brings us together, it gives us the opportunity to go to the next neighbourhood, and from that to the next country. I am a feminist today because of the bicycle: it enabled me to see the city differently and to connect with other women. It forever impacted my life trajectory.

As you have just recounted from personal experience, cycling activism is a space that often carries a progressive narrative but that reproduces many patriarchal power relations. How do you think we can move beyond this?

I think it is already happening. The first thing to do is to speak out. I am so tired of “all male” panels and leadership groups, and don’t hesitate to vocalise it. Recently for example, someone from Bicired Colombia published that a central issue to address was gender, but a photo from the meeting showed only men sitting at the table. How is it possible that gender is defined as an important issue but that there are no women at the organising table? When I speak out in such a way now, I am listened to and am respected, it wasn’t easy to get to this point. Jimena Perez Marchetta is also an example of an activist that sits on many organising committees and is committed to pushing for equal participation, and not only women but transexual women, queer people, etc.

There are also more and more women’s networks, which is extremely important. They enable us to build greater solidarity, have a greater impact and create greater changes against sexist behaviours within the bicycle movement. Women’s networks work to uninstall the patriarchal “chip” that we are all born with. Working with women hand in hand, without being competitive and placing empathy and solidarity at the forefront is a step against this patriarchal mentality. Working within this mindset doesn’t remove the possibility of dialogue and debate, but emphasises respect.

You were nominated as in TUMI “Remarkable Women in Transport” Cohort. What are your thoughts on TUMI’s 5 principles to empower women in transport?

I first encountered these principles when I was invited by GIZ to the Women Mobilize Women Summit in 2018. The principles are a very good first step, but at times fall short due to a lack of diversity issues and consideration of the issues that create masculinisation of the transport sector’s workforce. The question of how we can employ and promote the employment of women in transportation is very important: as planners but also as drivers, mechanics, electricians.

The first principle, “study and understand women’s mobility” is key. It is important that there is greater awareness and responsibility on the part of the planners – recognising the different ways of moving of women. Men move under the productive yet women most often move for both productive and reproductive activities, journeys of care. This mobility of care, as Inés Sánchez de Madariaga says, is what sustains life, yet it is often not made visible in mobility surveys. If these journeys are not taken into account by city and transport planners, then we will continue planning in an androcentric way: a mobility system that assumes the average citizen is a heterosexual, able bodied and privileged man. The principles of TUMI draw attention to this.

These principles are an invitation to start considering these issues but also to think about transportation, the burden of which affects women more. We need to dismantle the domination of men in public transit planning, active transportation, and public space, or our cities will continue to suffer from gender violence, harassment, objectification of women in the street. It is a social and cultural change that is needed but also a political and administrative issue that needs to be addressed.

Taking more into account the needs of women in planning and transportation is key to achieving feminist cities. How do you imagine a different relationship between civil society and government in decision-making in a truly feminist city?

In Bogota we currently have a mayor, Claudia Lopez Hernandes, who is the first woman and as well the first openly LGBT person to be elected to this position. She is aware of the need to change our paradigm in city planning, and her team is as well. She is aware of it and her entire team is aware of it. This is why we have had policies such as the implementation of more than 120km of temporary bicycle lanes to mitigate the effects of COVID-19, or why there is talk of Bogota Cuidadora, “the city as a caregiver”.

We are moving away from a vision of safety that is authoritarian and that comes from a notion of policing to one of collective care. This type of thinking transforms the social realities in the city. In Bucaramanga there were no changes until a mayor arrived who had the political will, and, following the pressure from the cycling community, removed the anti-bicycle signs and started the first project to build bicycle paths. With regard to gender, Bucaramanga is far from considering gender in urban planning, it limits its scope to intra-family violence, or to violence in the home, it isn’t even considering public space as a site of violence. There are no city advisors that take this vision of the city built around care seriously, in a way that can mitigate gender violence, that can make transformation in the cityscape to mitigate gendered, unequal access.

How do you think active transport can be articulated with other issues that relate to gender fair cities ?

The pandemic has called upon us to think back to a local scale of living. There are many who say let’s be Barcelona, ​​Paris, Amsterdam, but no, let’s be Bogota, in all its micro-spaces. This renewed emphasis on local spaces, strengthening the local economy, that is not new, but is positive for questions of gender and I am glad it has been brought to the fore. As a bicycle activist, I will always support these projects that favour active mobility, but it has to be done well.

How we reorganise social structures is the big question. The conversation needs to be broadened, towards regenerating territories into places of empathy, of local activation, that can be responsive to larger phenomena such as migration, poverty and climate. We are still a long way from achieving our goals, and where I think we can start is with small, individual decisions to generate changes in our immediate surroundings. A lot of these issues tie back to the feminisation of poverty. Women walk more and we use public transportation more, so it also starts by guaranteeing safety in our mobility and access to spaces in the city. Finally, I’m cautious about applying the term feminist too liberally: safe mobility itself should not be defined as feminist, but as a right for all.