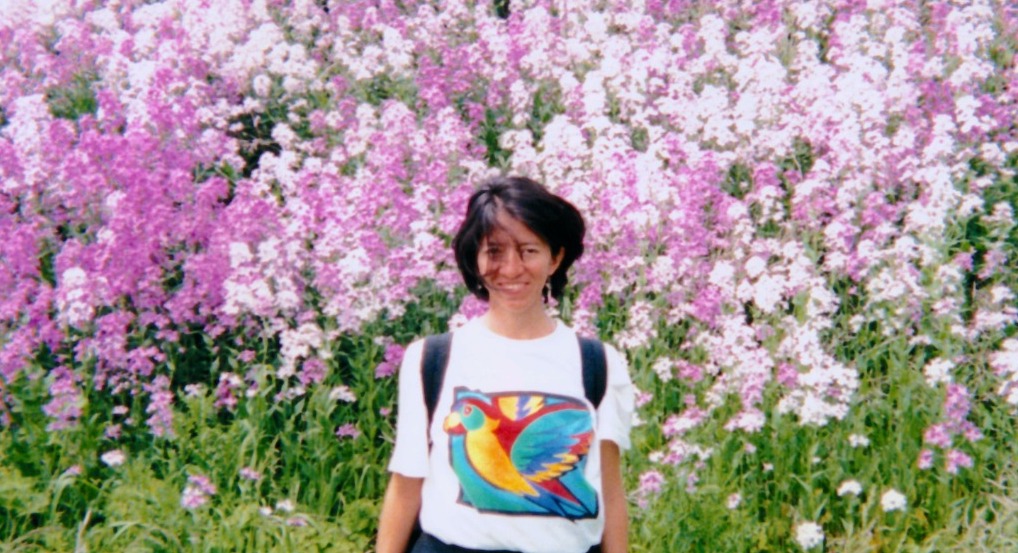 10 min read.
Areli Carreón is a longtime activist and co-founder of Bicitekas, an organisation that promotes the use of bicycles in Mexico City and lobbies for policy change around cycling and urban mobility. Since 2017, Areli has been the Bicycle Mayor of Mexico City.

How did first you become involved in Bicycle Activism and Advocacy?

When I was young I wanted to be a journalist. I studied communications, worked for a year as a media reporter, and became involved in environmental issues in my home city of Cuernavaca. I had a lot of ideas that I wanted to pitch, I was young and energetic but one day my boss told me “I pay you for writing, not for thinking”. After hearing this I quit, and that was the end of my journalism career.

This exposure to environmental issues made my jump from journalism to activism a logical step. I became involved in organisations protecting ravines in Cuernavaca, and was simultaneously enrolled in classes to learn how to lobby municipal authorities and build a citizen movement. As part of this course, I put together a plan to make a bike path in Cuernavaca, and we were so pleased with the result that we put it up as a formal proposal to the municipal government. That was my first entry into bicycle advocacy.

I was 25 at the time, and had already been bicycling for daily trips for a year. I had spent a year in Montreal and really seen the potential of the bicycle for everyday life there. Beforehand, I had been a regular Mexican girl riding a bike in the park or for fun, but Montreal made me understand its potential for transportation all year round in Mexico. So I was first a user, and after this course I became an activist, and I have been one ever since.

Mexico City has a history of great socio-environmental, violent transformation layered on geographic vulnerabilities. What are some of risks that the city faces ?

Mexico city used to be called Tenochtitlan, and was built on a small man made island on Lake Texcoco that was drained after the Spanish conquest. It’s situated in a high altitude basin with an average elevation of 2,236 m above sea level. Surrounded by mountains, the air doesn’t flow well. Being situated in this knot where Mexico’s two mountain chains come together, we are in a very dangerous earthquake zone, and are always awaiting the possibility of a big one. The only challenges we don’t face are hurricanes or tornadoes, but we have pretty much all the rest.

We suffer from lack of water, that we have to pump from very far away due to being situated at such high altitude. At the same time, in Mexico City it rains more than in London, so it’s not uncommon for parts of the city to flood. Water is the main environmental challenge. We are at high risk of aquifer depletion and becoming a dry city that already lacks drinking water.

We are also a very large city, the 5th largest in the world in terms of population, and the political and economic heart of Mexico. Mexico City itself is relatively small and dense, yet has a humongous urban sprawl around it that is part of the state of Mexico. 22 million people live together in one urban area, that’s more than in the whole of Holland. It’s a challenge, we need to provide food, services and infrastructure for everyone. It’s also a very unequal society with some of the richest and poorest people in the world live in Mexico city. We have people from indigenous communities, from all over the country, and 60 different languages are spoken in the city. I would say that this hugeness, this diversity, are both our main challenge and one of our biggest assets. You need to see it that way though, not only seeing it as a problem but also as an opportunity. That is one of the best kept secrets in Mexico. It explains why there is so much energy, so much going on in here. It’s truly a melting pot of creativity and action which is a wealth that I think we don’t value enough.

This scale also makes mobility one of the most pressing issues that must be addressed in order to improve quality of life in Mexico City. Today, the mobility system involves long commute times, and impacts health and social cohesion. How do you see promoting cycling as a strategy to relieve the current transportation system and provide opportunities for different communities ?

The bicycle is a tool for access, it’s a key to the city. It’s relatively cheap, it has low maintenance, it gives your freedom to go wherever you want  in the city. It’s free of schedules and fixed routes. It can really unlock the city.

Part of the work we have been doing for a number of years is framed around the idea of Mobility as a Right: a right that allows you to access the city and access other rights such as health, education, culture, jobs, opportunities and so on. The city is a human creation that attracts people because they are searching for these opportunities. If you use these sustainable, efficient and accessible tools, opportunities are multiplied for everyone. It goes against the idea that only the few that pay can have access to the city, which is a core issue in Latin America.

One of the things that is making cycling the mode of transportation of the future is its efficiency. Not only in terms of energy, cost and speed but also space. One of the most scarce resources in the city is space. It simply doesn’t make sense to have one person in a private car take up so much space. You can dream of a mode of transportation that is relatively costless, resilient, failsafe, doesn’t make noise, or doesn’t take up space but the bicycle already has it all. It’s the queen of technologies that allows you to move around, opening up resources, opportunities, and allowing human creativity to be unleashed. There is a common saying, “no living creature is more efficient than a human on a bicycle”.

Resilience implies resistance and the capacity to adapt during external shocks. When the devastating earthquake shook Mexico City in 2017, bikes were an important part of the relief initiatives. Could you speak about this?

We participated in this initiative as part of a network of organisations. After the earthquake shook us, there was a lot of information flowing about where help was needed, but there wasn’t much clarity however on what was accurate and the government was unable to verify damages. We put up a map within hours, and the cycling community went around verifying this information that was flowing on social media and reporting on damages or trapped people.

An army of people also came out with their bicycles to transport various relief items. We were going around the city with food, medicine, and tools to help the effort in saving people. There are 70 hours to pull out trapped people after an earthquake, and you need to move fast. Cycling was the only mode of transportation that never stopped. There was debris, there were very damaged areas that were inaccessible to vehicles due to obstacles, traffic or broken roads or gas leaks which made ignition vehicles impossible to use. We also needed silence to hear people under buildings. The bicycle enabled us to do this. We tracked 500 people doing this without stopping for 72 hours.

An incredible achievement this year was Bicitekas’ successful reconversion of JUMP bikes – can you talk about this and how this type of community led action reflects a more circular, equitable city?

This situation we are living in has in some ways helped us find new ways of thinking. I’m very proud that Bicitekas has always been open to new ideas. We were already doing “Recicletas”, donating bicycles to health workers that were suffering from stigma and shameful violence when using public transit. We asked the community in Mexico city for bicycles or spare parts that were unused. When the news came out that JUMP would be throwing its bikes in the garbage here, we had already seen awful images from around the world of the destruction of bicycles precisely when we needed them most. We approached the team that was in charge of destroying the JUMP Bicycles, and we pleaded with them to give us spare parts for us to give bicycles to the medical community.

They were really empathetic, the team there loved bicycles and also thought it was a shame, so they sold us the bicycles at a symbolic price under the condition that they were not fit to ride and that we had to invest time and money to restore them properly. This magic happened in Mexico and we are now imagining how to put them out there to serve the community: making it sustainable, community owned, useful. We are trying to imagine ways to use shared bicycles not as a business but as a model of self-service from the community that will allow us to see mobility as a right and not as a merchandise.

It’s a process trial and error. As a community group we have the flexibility to make mistakes and innovate without the pressure of providing earnings for associates or investors, and we are not the government for whom failure has higher stakes. We want to reimagine how to make a publicly shared system that can provide a service in a truly community driven way. We are learning to do this as we go, we never had a plan for it, nor did we think we could do something like this before COVID-19.

You were among the activists and organisations that lobbied for a bill that has recently been passed recognising safe, accessible, equitable & sustainable mobility as a constitutional right in Mexico. How did this come about, and how is this significant for the country’s future ?

We began working 5 years ago on a road safety bill. This is the 4th attempt to try and get the first Mexican bill on road safety. It’s almost unbelievable that we had no prior law or regulation on this matter. Before COVID-19, road deaths were one of the principal causes of death in Mexico city as well as for young people and children in the whole of Mexico. In this process, we found out it was necessary to reform the constitution to make a bill that could not be challenged by companies or governments unwilling to comply.

It is such a large and complex process that many of our colleagues were initially unwilling to engage in it. It seems like an unattainable goal. For a law to be firm and to really protect the Mexican population this seemed like the only true option. So 2 years ago, we went for it, and it has been amazing to see how relatively fast it went and how successful we were in getting legislators from all parties involved and on board. One of the things that emerged from this opportunity was to engage with the angle of Mobility as a Right. Now, the right for a safe, mobility, efficient, accessible, equitable mobility is in our central constitution. I’ve been told we are the first and only country that has such a clause in its constitution.

This is important as from now on, we can demand the government at all levels, from municipal to state to federal, to comply. It’s no longer a question of the political will of the governors or mayors to do or not to do things to improve with all the characteristics. We have the strongest tool in Mexican law to make demands. It might change the conversation for Mexico, and not only for bicycles but also for public transportation, pedestrians, or people in wheelchairs for example.