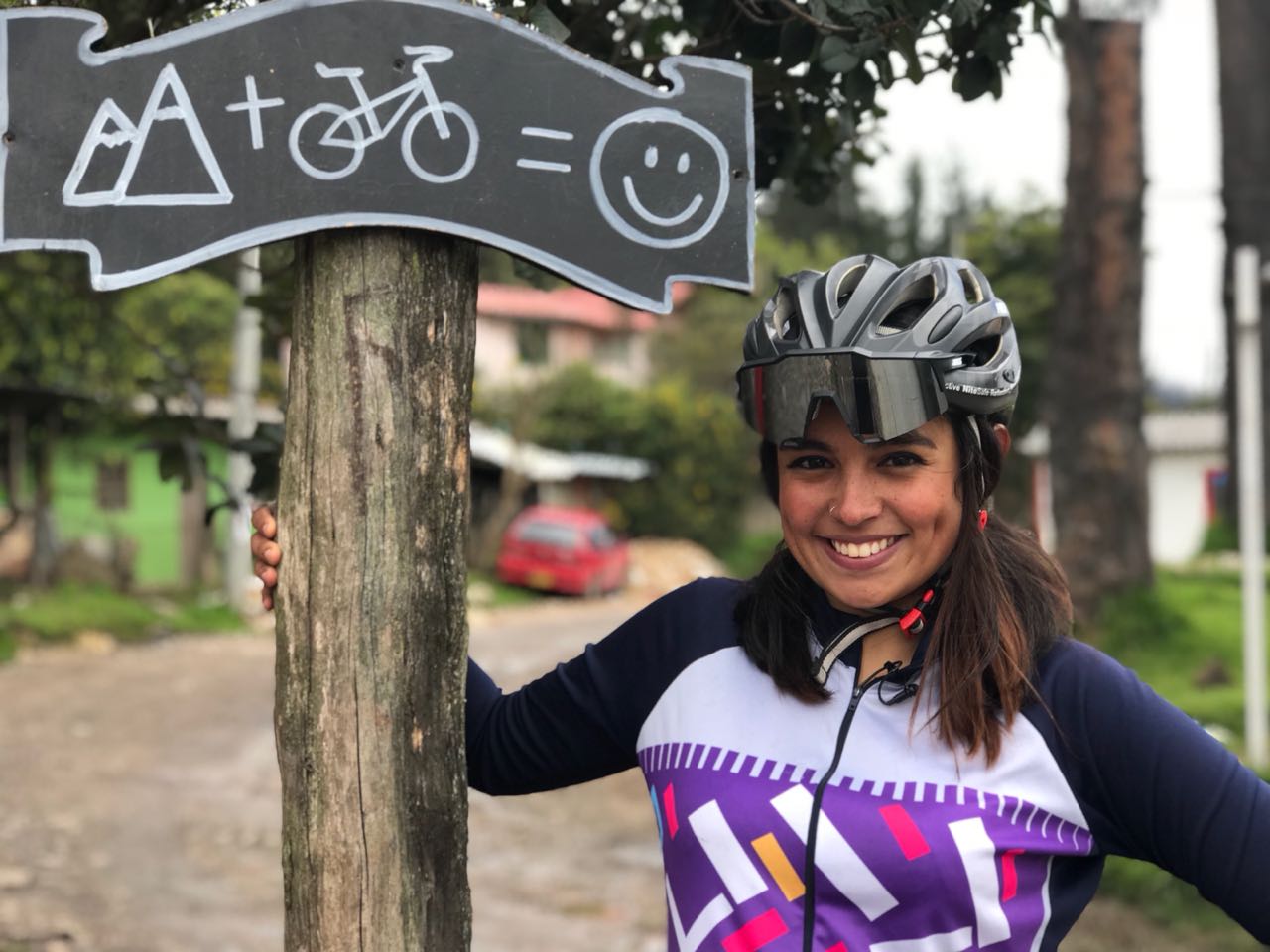 If you are in Latin America, you may have already come across a reel or a tiktok cycling song from Laura Carolina Pava García who, at 27, has used her skills as a journalist, urban cyclist, and now Bicycle Mayor to enact positive change in Bogotá.

Could you tell me a little about how you grew up? What were your main influences to start riding a bicycle?

I learned to ride a bike on the open streets Sundays in Bogotá. My main influence was a neighbour, and we were about seven years old. I had a small bicycle that they had given to my sister, which had two rear wheels. That was my first experience with a bicycle in public space. Then in college I met a friend who lived very close to me and used to ride his bike to school. He was another person who inspired me to do it. When I was riding the bus along 26th Street, I saw many cyclists on the route and I thought “oh, how cool to be able to get to university by bicycle”, but it scared me a lot.

When I started, I saw very few women, but those few helped me say, “yes, I can” during the first difficult few months. Sometimes I got discouraged when it rained or when my bike got a flat tire and I didn’t know what to do; but when I saw other girls passing by I said “I can because that girl could do it”. 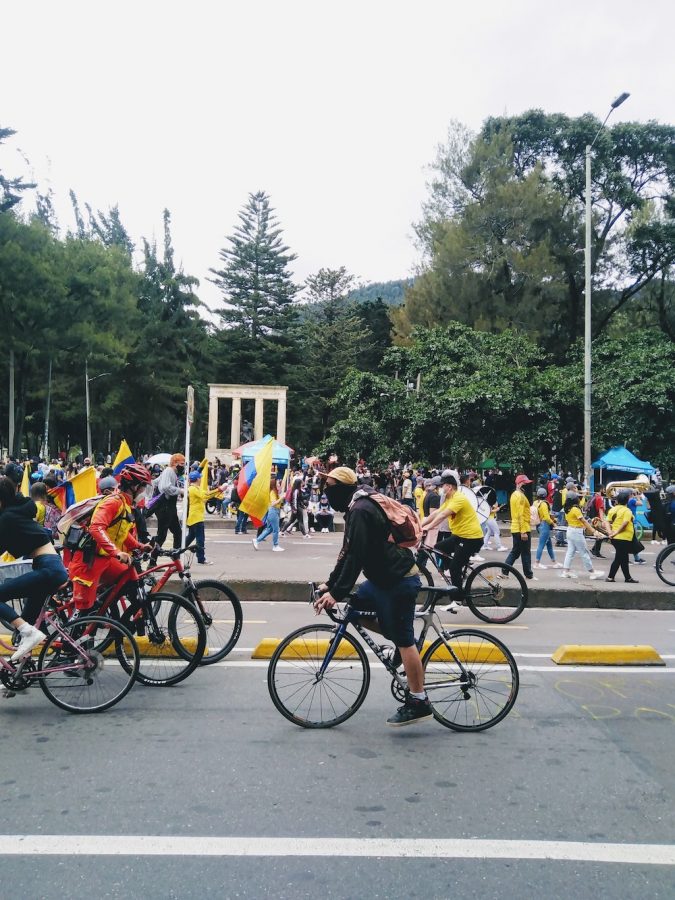 And how did that become your professional career and your job?

I studied Journalism and Public Opinion, and cycling made me much more aware of space. I am still amazed at how much one can see on a bike that we don’t see in the car, or on public transport. I think that the bicycle is a useful tool for journalistic observation. At university they told me that journalists should have worn shoes and I told them “I have worn tyres”. It was a way of rebelling. My family told me about horrible stories on bicycles and at first there was a lot of resistance to my riding a bicycle. So it was also to show that riding a bike was much more than just transport.

Can you talk a little bit about the importance of gender representation? Were there challenges in how Colombian community or society perceived you as a female cyclist?

When I was little, people in fashion magazines were blonde, tall, thin, with a “normal” straight body. I didn’t see myself represented there and that definitely left me and others with self-esteem issues. These issues translated into cycling, with bullying a big reason not to ride a bike. “Girls shouldn’t ride a bike in a skirt.” Small things like this in the long run they greatly inhibit cycling.

Society in general said that it was very dangerous, that the roads should be for cars, that the conditions were not safe. But I think that in Bogotá, in recent times, there has been a transformation in the way of seeing the bicycle. No longer as a hindrance, but as a mobility solution in a city like this. In that sense, realising that a woman can ride a bike and break down stigmas and myths is very important. It is valuable that the contrary voice comes from an outspoken, short, dark-haired woman without high social status, nor the best bicycle. This message then resonates with my audience. My work is to communicate from my perspective, and show that it is a shared one.

And was it a cultural change promoted by the Government, or was it promoted by civil society groups?

I believe that in Bogotá, the cultural change and in the promotion of the bicycle has been citizen. The Ciclovía and the bicycle collectives are 100% citizen projects that the people themselves formed when they realised that there was no political will. Right now we may see it, but in past governmental terms the bicycle was not on the agenda and there were many myths surrounding the bicycle. That is why I am sure that it has been a change that the citizens themselves have brought about.

Sometimes the bicycle is perceived as a “poor man’s” transport. Is this a barrier you face in Bogotá?

Of course, but I feel that the image of cycling is now diversifying a lot. Historically in Bogotá, bicycle users were working men going to jobs on construction sites. Now though I love that you can see someone on a super damaged bicycle next to someone with a very expensive one, sharing the same space. Everyone can use a bike regardless of economic status.

You mentioned a little about how you first came to cycling. Can you tell me a little more about your career, and the work you are currently doing in Bogotá?

Well, when I started using the bicycle as my means of transportation, I was studying journalism and working on a newspaper called El Tiempo. It is the largest newspaper in Colombia, and my first report was about cycling. I saw that there was a boom in the use of bicycles and how groups were being formed.

My project “El Rincón de la Bici” [The Bike Corner] began to take off digitally in 2018. In that year we began to make a series of YouTube videos for the Weather Channel that covered various bicycle topics. These videos became very important because they were the first female cycling reference at a time when the media didn’t show any female Colombian cyclists. This was a great opportunity to begin to diversify that content and people took that information very well, although we also had many issues and not-so-positive feedback, especially on the subject of machismo.

I left the newspaper around 2019 and started looking for ways to produce my own content. After all this, “Una Rola en Bici” was born, which is my main project, and that which I run as Bicycle Mayor.

Una Rola en Bici shows a woman riding a bicycle in her hometown, and promoting it as a vehicle that transforms not only the city, but also the people. The people I have met through the bicycle have taught me so much, and the bicycle has transformed their lives as much as mine. I want everyone sitting on a public bus today to realise that riding a bicycle is also an option.

As I was telling you, many women inspired me, so this is my time to take all that inspiration and give it back to other people. That’s how journalism, cycling and all my work as a professional merged.

What do you think are the keys elements to communicate about urban cycling to build the cycling culture in Bogotá?

Lately I have been thinking a lot about road culture, and also government policy to ensure safety. It is important to talk about the issue of infrastructure and public security. It is even part of our culture as Latin Americans. I have been to Mexico and Ecuador and I have seen similarities in behaviour. The idea that because someone pays taxes and is in a car gives them right of way over a cyclist needs to be eradicated from our culture.

I think that it is key to realise that our personal decisions can affect others. We need to realise that we share the road with human beings who also just want to get home.

On your channels you share a very identifiable and aspirational message for many people. How do you manage building an image of urban cycling that is both desirable and accessible?

I think that although my image is identifiable and aspirational, it also reflects that riding a bike is not always a positive experience. I don’t want to just tell the good, but also what is not so cool about the bike, so that we can strive towards change. I have to be real and face these issues but show that there is potential. In the same way that Bogotá has so much potential both as a city and country, we are the benchmark for the region, but still have a lot to work on.

How do you find a balance in your media to talk about safety and mobility issues, but also make them engaging?

Digital media has made it possible to speak from different perspectives, enabling the serious issues to be broken down easily. I have tried to use trends that are very digestible for people. For example, I took the trend of the little red flags as alerts, and I made a nine-second video that comments on the condition of bike paths in the city in a fun way. “If he tells you to ride on the bike path, little red flag.” That video went super viral and was a very easy way to set a precedent. The platform makes issues relatable.

You have a very dedicated audience, but do you have any communication strategies to reach different groups outside of the cycling echochamber?

My audience is very niche, and almost all of my followers have their profile picture with a bike. Although the algorithm of social networks sometimes does not allow my content to reach all the people I would like, I do often see debate which means some messages are reaching alternate demographics. This means I can see what kind of messaging makes drivers uncomfortable, and learn from that.

As we say “la unión hace la fuerza” [common Latin American phrase meaning “union is strength”]. The Bicycle Mayor Network enables ideas to become actions on a wider scale. We have a common path and vision — promotion of cycling for quality of life in cities — but we have different ways to get there.