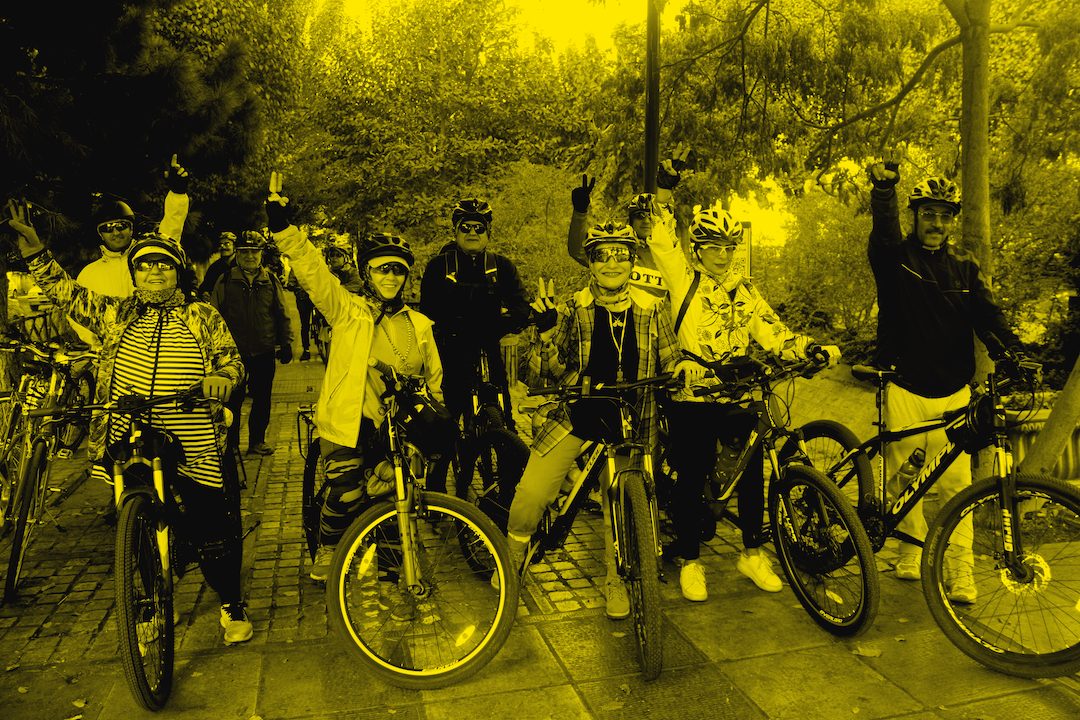 Currently Iran is politically unstable, and women’s rights are a central issue. Cycling for women, especially in recent years, has been considered a taboo, especially in small towns. This is because the right to cycle for women represents not only the right to choose a means of transportation, but also the right to freedom, independence, self-identity, and to be publicly visible.

Zahra Bahrami is an influential female cyclist leader, and here shares her story of being a woman cyclist in Tehran. Zahra is a grandmother who returned to cycling eight years ago, and became involved in cycling activism. Today she is one of the female leaders central to the promotion of cycling in Tehran with a focus  on strengthening the culture of cycling among women. The story of her life is a story of motivation, belief, hope, and empowerment through the bicycle.

Mohammad: Tehran is a city dominated by cars, as are many Iranian cities. In spite of the bicycle’s prominence in Iranians’ collective memory, car culture has spread throughout most Iranian cities with the development of car-centric urban planning. It is common for people to store their bikes away when they reach a young age, but Zahra’s story is different.

Zahra: I got married when I was 12 years old. Prior to that, I used to ride my bike every day. At the time my husband, who was a friend of my brother, used to go to work with my brother and would see me on my bike. My husband recalls my biking days before marriage. The first time he saw me, I was on a bike. When we married, my husband stopped letting me ride my bicycle. Like many others, we banished it to our storeroom. As a teen it was hard to give up this freedom.

Most people in Iranian society separate from their bikes when they get older; Zahra’s marriage caused her to break away from her cycling habits, enforcing the mental barriers that many in Iran share that cycling is for children, and certainly not women. It took years for her to find the bicycle again within her everyday life.

I was an athlete and bodybuilder until I was injured 8 years ago. During this period of depression I couldn’t stay home and do nothing. Unconsciously, I used to cry when I saw women exercising or watching sports programs. My doctor eventually said that I could start walking again, so I started to do so in our neighbourhood park. While walking in a group with other women, I one day saw a bicycle library in the park and it sparked memories of cycling. I asked whether women were allowed to ride, and the attendant said we were. Instead of walking further, I told my friend I would take a bike. It was there that I began again. My bike was always in the park, and I rode it every day, and in that period, I often saw Mr. Azade Del (whom I later learned was in charge of transport education in the park), who always encouraged me, though it was strange for him that I could ride a bike so well.

Some time after I was told that a women’s cycling group was to be established in the park. First, women should be taught how to ride a bicycle, and then they were to learn to use the bicycle for short trips around our neighbourhood. I was asked to help teach other women how to ride bicycles. After that, we practised riding in the park every day.

The bicycle helped Zahra rediscover herself again, and she hopes to help other women to also change their perceptions, understand their obstacles, and change their lifestyles. When a woman rides a bicycle, she raises awareness and challenges the existing gendered spatial order. When a group of women ride bicycles, they break the hegemonic pattern, overturn the existing order, and disrupt everyday spatial regimes.

Cycling in the confined space of a park is different from cycling in the city. The last decade of policy in Iran has restricted women’s activities to indoor spaces or urban parks in order to make them invisible in the city and in society. However women’s cycling in public space makes them visible in urban theatre, tactically challenging gendered spatial strategies as they move through the city and play their role as visible actors. For Zahra, the first day she decided to move around town on a bicycle was a frightening yet gratifying experience. Every force she put into the pedals was an attempt to “be” in space.

After a while, the park decided to lend us their bicycles so we could ride them home and use them for our daily lives. At first I was very afraid to ride my bike in the city, but I was determined to show that I could do it. Finally one day after training at the park, I summoned the courage and rode my bike home! It was a little scary but very enjoyable at the same time. My husband had a completely different opinion. My first fight was with him and my family! My mother’s family is very religious. My mother used to say: ‘Zahra, do not let my family see you riding a bike!’

Women’s cycling in Iranian society is more of a customary political issue than a religious one. There have been many restrictions on women’s cycling based on political and ideological considerations and this type of restriction is much more prevalent in Iran’s religious cities. For example, in the city of Mashhad, women are prohibited from using the bicycle sharing system. Despite these conditions, many women use bicycles for their daily commute and see them not only as a means of transportation, but also as a way to express themselves and protest gender inequality.

Cycling in Tehran not only fights against the car-centred streets, but also against misunderstandings and dominated car logic. Especially if you are a woman, this battle is fought with gendered mindsets and many false assumptions. Women see cycling as a political practice to challenge everyday spatial regimes.

One day I saw my mother’s cousin in the park, he was also a cyclist! When he saw me he said with a smile, ‘Zahra! Are you biking?!’ That day, Hamshahri newspaper had come to the park to write a report about cycling. My mother’s cousin and I talked to them and the newspaper published our photo in the report. The title was “Good Neighbourhood Role Model”. A few days later, when the family gathered in a big hall, Mrs. Tavakli, my mother’s cousin’s husband, called me, took my hand and said to the whole family: ‘we are proud of Zahra!’ My mother and husband were pleased and relieved by this, because they were always afraid and worried about my family’s reaction to my cycling. Interestingly it was my mother’s cousin who became the first member of my cycling group! A group that later became hundreds of people and from which several other groups were formed in different neighbourhoods of Tehran. One day I put a large number of our family on a bus and took them to the park for bicycle training. Many of them later bought their own bicycles and now use them for their daily commute.

Zahra’s belief in cycling and her high motivation to teach other women seal her influential position as a cycling educator and facilitator. If words come from the heart, they have the power to change people’s perceptions.. Zahra wants to change people’s mindsets in order to change their lives and transform the city so that a better city and society is possible.

My group grew larger day by day. I also taught my grandchildren to learn the benefits of cycling from a young age; and there is a 20-strong group made of grandparents. When young women come and see how easily older people ride bikes, they become motivated and their fear decreases. Sometimes I say to the young women: ‘Look! The grandmothers are pedalling. Learn!’

Cycling is not only physical movement from A to B, but also a critical bodily practice, a way of life, and a meaningful method of self-presentation. In the Iranian context, a bicycle is a seemingly simple tool, but a complex and intertwined phenomenon with cultural, social, political, and environmental aspects. For someone who rides a bike in Tehran, the bicycle is a means to transform the urban experience and a way to express citizenship. If you are a woman, it is even more than that; the bicycle is an emancipatory tool to transform lived space and cycling is a practice to represent power and challenge hegemonic socio-political structures from below.

There are so many indirect benefits of cycling among women. It is very important for us as women to show that we are independent, and that we can change society. Many of the women I taught to ride a bike said, ‘You changed our minds!’ The technical training was not so important, it was more important to change the mentality of the women and for them to believe in themselves. This is the feedback I’ve had on membership forms, or in Instagram comments. It helped their family relationships too: many women did not have a role of authority in their families, but after they started cycling, many things changed. To one of the women who came to the training, I said, ‘Look, you never wanted to take your rights as a woman! You have always been obedient! Now it’s time to command your body and your feet! Tell your feet to push on the pedal!’ I slapped her legs and said, ‘Give them a command, push them to move!’ After training for some time, her husband said to her, ‘How you have changed!’ Thanks to the bicycle, and thanks to the strong influence women have on their families, all of their lives and relationships have changed for the better.

In a society where women’s rights are a pressing issue, cycling can be a way to challenge the dominant patriarchal discourse. The freedom of movement and independence that cycling brings can have multiple effects on the micro-dimensions of women’s daily lives, and bring about far-reaching changes in the gendered structures of society and environment. Zahra works to strengthen the human infrastructure of cycling by supporting the female community and inspiring women to use bicycles as a powerful means to reclaim freedom, and as a transformative force for our city.

What also has to be said is that the bicycle can change lives; especially the lives of women in our society. I myself was locked up at home, but since I started riding a bike I’ve felt free and my family counts on me more. My daughter says: ‘I am proud of you.’ My son-in-law says: ‘I believe you’. My mother trusts me with her banking matters. Previously in situations dominated by men I could not speak with confidence, but now I have great confidence and many members of the groups I lead with ease are men. The bike has given me so much more than mobility; it has made me a stronger version of myself, improving my communication, and my relationships. It is part of my identity. So now I say that I am not just a cyclist, I am Zahra!