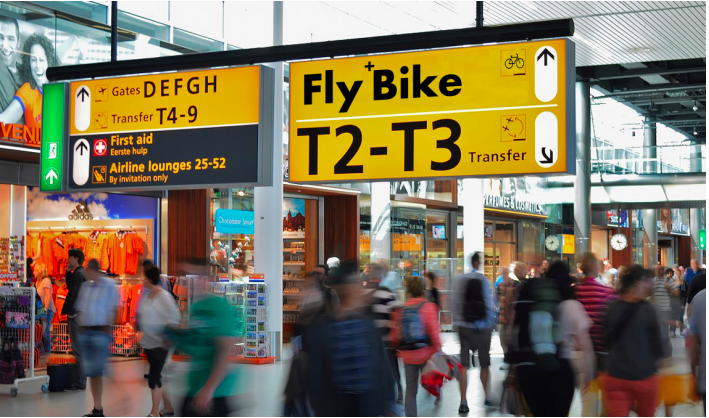 Connecting airports to cities with bicycles to cut traffic and pollution

Schiphol in Amsterdam is one of the busiest airports in the world. And the traffic around the airport is congested due to the constant stream of workers and travellers. This is not only making it harder to reach the airport, but is also jeopardising air quality and increasing environmental impacts in many areas.

As part of the mobility concept ‘Ruim baan voor de speedfiets’ (Pave the way for the fast bicycle) – which identifies an opportunity for a new bicycle highway connecting the airport and the city and business district – we created detailed plans for the Fly + Bike concept. This will allow travellers flying in to Amsterdam to have the option to simultaneously book a bicycle together with their plane ticket. If they have large baggage, this will then be delivered to their final destination through a special electric baggage service. Fly+Bike will help to set an example to the world of how cycling can be integrated into society, and it will contribute to the true ‘dutch experience’.

The idea was developed in cooperation with our partners at BAM Infra, Royal HaskoningDHV, Mijksenaar and Gazelle. And we’ve since been undertaking on the ground research, insight gathering and trials in Rio de Janeiro, Brazil and Munich, Germany to expand the concept further. We also want to make it easier for all workers at airports to commute by bike.

Read more about the mobility concept here (article in dutch).