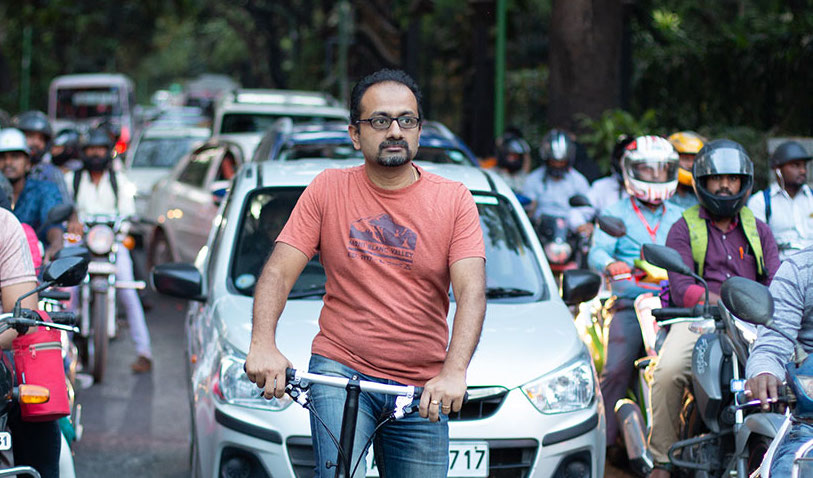 6 min. read
Sathya Sankaran is the Bicycle Mayor of Bengaluru. He has over ten years of experience in civic activism and mobility interventions, and plays an active role in driving forward the sustainable vision of Bengaluru.

Could you talk about how you came to be involved in bike advocacy?

I’ve been working in the civic change making space for almost 12 years now. During the first few years whilst I was campaigning for active transport, myself and some colleagues ran a campaign to advocate for a suburban railway system in the city of Bengaluru. Other large Indian cities already had this, but Bengaluru still didn’t despite its rapid growth during its journey to becoming a tech capital. The city was not equipped to handle this growth and there was a catch up period that was needed. My focus was on the pollution problems this growth was causing. The traffic problem needed to be solved involved campaigning for trains and other services to prevent further congestion. So by 2012, I found myself already a part of a big sustainability drive for Bengaluru within the non-motorised transportation department of the government.

On a more personal note, I had also begun to cycle regularly in order to solve my own health problems. I was suffering from lower back pain from a sedentary lifestyle that was heavily car-orientated. I started cycling, running and swimming for fitness. That’s when it hit me – the opportunity to use cycling as more than a sport, but also as a means of transport. After all, it’s not like you can swim to work! The bike could offer a lot to my lifestyle. This further drove my sustainability ambitions for Bengaluru. I worked with the government to push for cycle lanes, open streets initiatives, all of which led me to become an activist for cycling.

Bengaluru experiences poor air quality, a large percentage of which is attributed to traffic and congestion throughout the city. How do you see the role of cycling in tackling such a problem, and whose responsibility is it to take action?

In Bengaluru, 40% of air pollution comes from traffic and 20% from construction-related dust. Together, that’s a huge 60%. So tackling the 40% arising from traffic is a good start. Traffic in Bengaluru is only increasing, and net zero emissions have become a big target for the country. It’s not small measures that are going to achieve this. We need drastic action, and one of the ways to do that is by ensuring cycling becomes a key part of urban mobility.

There are many advantages to using bikes: tackling sedentary lifestyles, which is a massive personal gain, and of course the environmental argument which enables you to contribute to healthy city living. Bengaluru, being a tech city, has a population that is used to a cosmopolitan way of living, who could embrace cycling in this way.

There’s also the money dimension. The people who are causing traffic related pollution are those who have enough wealth to be in a position of choice, and they are choosing motorised transportation methods. Poorer people often can’t afford public transport and must cycle instead. Pushing people to make a change in their lifestyle is pushing people to make a statement. If you can afford a car, and choose to drive, you’re not really making much of a statement.

The question of responsibility is an interesting one. There is no single person who is responsible for poor air quality, as ultimately all people are responsible. Even decision-makers are people at the end of the day. We have all made certain lifestyle choices based on biases that exist in our mind. These typically propel us towards motor vehicles because of convenience for example. Decision-makers and construction tends to be highly inefficient. The volume of infrastructure that must be built is massive. And of course, the political system works on popular choice. Politicians need to see the demand from the people for cycling. If there isn’t that demand, politicians will question why they are building all of this cycle infrastructure. Pressure needs to come from the people. And people need to start thinking about cycling, it needs to seep into societal norms. There needs to be a culture of embracing the bike. For example, if you don’t use a vehicle, you are considered poor. If you show up at a five star hotel on a bike, you are an outcast and looked upon as unfit to use the hotel. These are the kind of attitudes we have to change in order to break barriers.

We need to make cycling come across as something aspirational instead of only relying on technical data and facts. At the moment, that is not happening. I don’t tend to use technical arguments anymore. People are more swayed by emotions, social norms, marketing and things that truly speak to them. We need to communicate better and differently! Unless it’s made to look like something cool, youngsters will abandon the idea of cycling at school and that will affect a whole generation.

Could you talk about your #ResetWithCycling initiative?

I have been running the ‘Cycle to Work’ campaign for about two years now. On Car-Free Day 2018, I launched a platform called ‘Cycle to Work’ which gamified the cycling experience for working people. So when COVID-19 hit, a Tweet that asked what the role of cyclists could be during this pandemic sparked an idea. I reached out to my cycling work group and asked whether we could start delivering supplies for the needy. In no time, we had 80 cyclists delivering essential supplies to the elderly, such as medicines and food. It was a huge success which got us thinking: why can’t we use this opportunity to communicate the role of cycling? We could use this moment, as lockdown ends, to reset the city using the bike.

#ResetWithCycling took off. We discussed the opportunity to relax lockdown rules for cyclists in Bengaluru with the police commissioner, who agreed. This set a momentum into motion. Together with BYCS India, all Indian Bicycle Mayors set about calling upon the national government to create opportunities for cyclists during the pandemic. The government then made recognition that cycling could offer benefits during lockdown. In that time, the National Smart Cities Commission along with the IDPE adopted the #ResetWithCycling hashtag. As the pandemic gets down to more manageable levels, we want to get people used to cycling as a mode that can offer a better end point for the city. We have been successful so far as leisure cycling increased five fold in the city. Nationwide, stores were running low on bicycle stocks.

As we come out of the worst of the pandemic, do you see the momentum that is driving cycling rates higher as sustainable?

It is very possible. There are certain conflicting imaginations of what the world’s role is in making people run to closed spaces like cars. We need to communicate that closing yourself in cars is not the answer. Instead, open yourself up to the outside world through cycling. I do think the scale has tipped although we are not quite at the tipping point. There has been an elevation in the adoption of cycling, and the noise that is being made around it is definitely making people sit up and pay attention.

Ultimately the politicians know they need to make a change as globally there are targets they are driving in relation to environmental health. However, they are still moving forward in a manner that remains friendly to their constituencies such as big businesses.

What we must consider is the ecosystem around cycling which we have built. We need the bicycle manufacturers, the infrastructure, the cycling communities that provide support. We need that and we need to appeal emotionally to a wide variety of audiences. Whilst I blame politicians as they are accountable for our air quality, I know we need more than the political economy to achieve what we want to achieve. If the majority of people aren’t behind cycling, then the political party may be pushed out of power by its electorate as they pursued unpopular policies. Therefore we need to cultivate an audience that pushes for cycling. It must be a diverse audience that can help us create this cycling ecosystem we need.