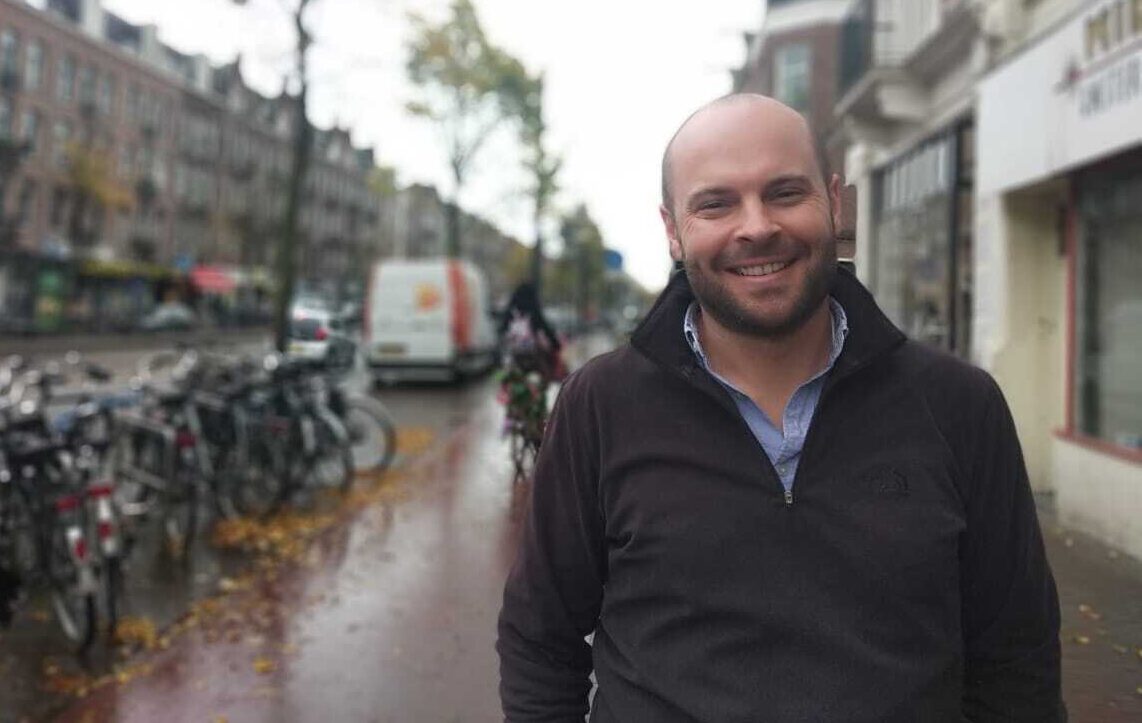 8 min read.
Alex Baum is the Strategy and Impact Manager for BYCS. He is the lead researcher for the report “Cycling Cities for Toddlers, Infants & Caregivers”.

The ability for caregivers and young children to safely and comfortably navigate the city on a bicycle can indeed provide a myriad of benefits that have been traditionally ignored by city planners and bike advocates. Infants and toddlers learn and develop their cognitive abilities through call-and-response: an inquisitive gesture or sound followed by a caregiver’s comforting touch, reassuring voice, and clarifying explanation. The close physical proximity and unrestricted panoramic view that caregivers and young children share while cycling together make this connection effortless.

The bicycle also connects young families to community and nature. A ride to the grocery store, through the park, or along the water provides limitless opportunities for young children to discover their natural and built environment and for the caregiver to connect these observations with teachable moments. The sounds, sights, and smells of being outside, moving at a child-friendly speed, with the ability to pause for further investigation gives cycling the freedom and flexibility that infants, toddlers, and caregivers need. During the course of our interview, Jimena Pérez Marchetta, explained that on one of their regular rides around Salta, Argentina, her young son noticed that something was different about one of their local streets. After she explained that it had been resurfaced, they paused so he could feel the new asphalt. His connection with this street and the concept of street resurfacing are deepened through their shared cycling experience.

In addition to these connections, Jimena’s son is also gaining a greater awareness of how he relates to the objects around him in public space, such as motor vehicles, pedestrians, and signs – known as spatial awareness – as well as the relationship between the public spaces he is moving through – known as environmental awareness. Despite improvements in navigational technology, the ability to easily move through an area, whether it be a crowded square or a large building, is an important part of living in a city and for a child begins with mentally mapping their own block and neighbourhood. Similarly, quickly analysing and processing the millions of observations one makes in moving through a busy street – from knowing when to stop and go to which objects represent danger – is a critical skill needed for urban life. Cycling with a caregiver and eventually independently ingrains these different scales of awareness in children.

Beyond the direct benefits to young children and caregivers, cycling also provides a number of broader benefits to cities. Children who are inactive at a young age tend to be inactive as adults and then, as a result, often suffer from obesity, cardiovascular disease, and different types of cancer. This puts a major strain on the individual and society as a whole in terms of reduced productivity and increased health care costs. Cycling with a caregiver and then on one’s own makes physical activity a part of daily life from an early age and can play a role in preventing these health issues. Rising levels of air pollution in cities as a result of transport emissions are also contributing to health issues as well as environmental challenges. Replacing motor vehicle trips with cycling can help reduce these emissions, leading to cleaner air and a reduced impact on the environment. Cities are also becoming more divided in terms of the disparity of the lived experience between rich and poor. Lower income neighbourhoods tend to be located along loud, congested, more polluted arterials and highways, bearing a higher environmental burden and making access to jobs and basic amenities more difficult. The ability to safely move around by bicycle could make daily life healthier, easier, less stressful, and more predictable for the people who need it most. As a result, caregivers could have more frequent, longer, and positive interactions with their infants and toddlers which is crucial for cognitive development necessary for long-term success in life.

In order to realise the benefits of cycling for infants, toddlers, and caregivers and the population of cities in general, there are a number of barriers that need to be addressed. The most important and yet most difficult barrier to overcome is safety, both in the sense of feeling safe as an individual in public space as well as as a cyclist on the street. It is difficult for most people to even imagine getting on a bicycle until this barrier is addressed and even then, the lingering perception of danger is often more influential in one’s decision-making process than the supposed reality of the situation. Challenging cycling conditions, such as extreme weather, difficult topography, high levels of air pollution, and long distances, also contribute to the perception that cycling is not feasible, is unhealthy, or incompatible with presentability norms. As a result, in many cities, cycling is largely adopted by those living at the margin – often the very poor and very rich, who either have no other choice or who can afford to partake as a pleasure activity – and thus, for the majority of society it is perceived to be “not for me”. The humble bicycle is seen as just that and not the object of desire and attraction as seen in advertisements for high-end automobiles or motorcycles. This then further contributes to a lack of proper bicycles and associated equipment, such as child seats, for those who do want to cycle but have unique needs, such as caregivers who need to transport children and goods.

Despite these barriers, it is of critical importance that cities prioritise infants, toddlers, and caregivers in their cycling strategy. There are over a billion children that live in cities and many of the adults that live in cities act as caregivers to these children at some point in time. Despite their prevalence, infants, toddlers, and caregivers struggle in cities where the design and hierarchy often causes them harm, makes caregiving difficult and unsafe, and prevents children from playing, learning, and properly developing. These groups are also among the most vulnerable groups to the challenging conditions in cities but have many of the same needs as everyone else. Because of this, if a city is designed for infants, toddlers, and caregivers then the rest of the population will also benefit and have their needs met. In addition, even though infants and toddlers cannot always express their views and issues, they have the same right to thrive in cities as able-bodied adults.

With a range of barriers, it is difficult for cities who have decided to prioritise cycling, especially for caregivers and young children, to know where to begin. Infrastructure is expensive and politically risky so it is key to have quick wins early-on to gain buy-in. Cities should prioritise pilot projects that are quicker and cheaper to implement. In combination with marketing and events, these demonstration projects can help people experience the benefits of an area where cycling is safe, easy, comfortable, and fun. Open-streets and car-free days as well as group rides help make cycling seem more normal and make people feel safe while cycling with others. To overcome the high up-front cost of owning a bike, cities can partner with bike shops and community centres to offer lease-to-buy or work-to-own programs. Cycle training programs can be set-up in school yards or parks with a particular focus on teaching young children and caregivers. From the beginning, the emphasis should focus on making streets and public spaces safer and healthier for all users, not just cyclists. Such a broad message helps to increase acceptability amongst the population and makes it more difficult for opponents to cast the effort as only for a select few.

By taking these small steps, cities can pave the way for a thriving, healthy, sustainable, and equitable future. Infants and toddlers who have grown up cycling with their caregivers and then on their own have a greater chance to have a healthier and more productive life. They will have developed many of the cognitive skills necessary for higher levels of learning and success. Their connections to their families, community, and the environment will remain strong.

To date, there has been limited research conducted on the advantages of cycling for infants, toddlers, and caregivers as well as the broader benefits that incorporating these groups into a city’s cycling strategy provides. In addition, data on this topic, such as the specific health and development benefits, that would be crucial for research and decision-makers, is not being collected. As a result, cities are not prioritising cycling for infants, toddlers, and caregivers in their planning, programming, or policy and the challenges for these groups and cities in general are only becoming more difficult.

To begin addressing this knowledge gap, we partnered with The Bernard van Leer Foundation on a project focusing on the positive connection between cycling and early childhood development. We conducted background research, literature reviews, and interviews with over 20 researchers, caregivers, policy-makers and bike advocates. The longer-term goals are to inspire policy and planning changes as well as further academic research that are advantageous to children ages 0-3, caregivers, families, cyclists, and city residents in general. This report is a starting point that we hope opens a discussion on the need for greater inclusion of young children and their caregivers in cycling driven change.

Access our Report on Cycling Cities for Infants, Toddlers & Caregivers