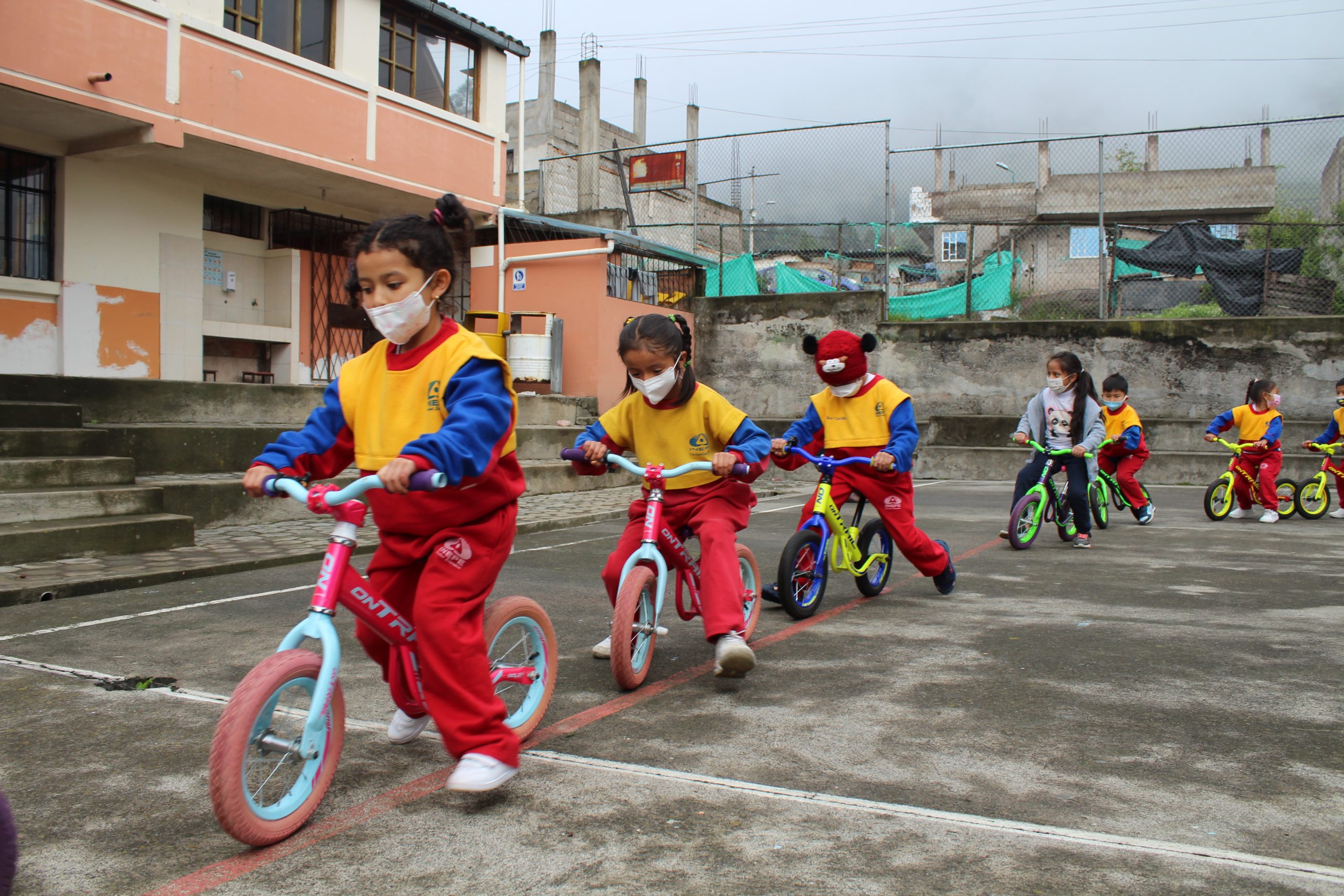 Amanda Padilla, Project Manager of the Cycling Games in Ecuador, highlights how the initiative started, overcame the challenges caused by the COVID-19 pandemic, and the potential for cycling in Ecuador’s youngest generations.

As part of the World Bike Forum held in Quito in 2019, the Cycling Games project was proposed as one of the many strategies for showing the potential of improving mobility in cities and raise the profile of biking in urban areas. It was derived from a Danish methodology of “learning by playing“, and promotes cycling in schools through an approach targeted to young children. The concept was developed by the Danish Cyclists’ Federation in collaboration with the kindergarten Hylet, and its success was made possible by funding from ITS Teknik and Urban Cycle of Planning, both Danish organisations.

In Ecuador, the pilot project is a long-term objective and is being executed with the support of Biciaccion Organization at the INEPE school in Quito. It began in the 2019-2020 school year with 128 students participating in two sessions per week and has shown encouraging results. Simultaneously, surveys were conducted that demonstrated positive reception of the project and results such as improved physical ability and social skills. The full article about the impact of the project was published last year by the Cycling Embassy of Denmark.

Like in many places of the world, the COVID-19 pandemic forced the closure of all schools in March 2020 and a transition to virtual classes was imposed. Therefore, from March to June 2020, the research into the impact of the project stopped, as children had to suddenly learn new ways to study.

Despite the disruption however, from September 2020 to June 2021 the project was renewed at the INEPE school for the following school year. A revamped virtual project aimed at keeping up motivation and love for biking emerged.  Initially, an instructor at the school proposed a plan to enlist the collaboration of parents in the development of the methodology, and assigned readings to support children’s motivation and creativity. However, after just a few weeks, the project had to change after parents asked school administrators to reduce the number of online classes due to the tiredness expressed by children. As a result, some classes, including physical education of which Cycling Games was part of, were reduced.

The new school schedule included only an hour per week for physical education. Nevertheless, as the students needed exercise in order to avoid physical problems and demotivation, the Cycling Games was adapted by developing virtual classes that no longer required parent collaboration and which included an element of physical activity. Later on, when it was allowed, a second component was introduced with some reading lessons using short stories about cycling.

The first class took place in October 2020 with two groups of students that were part of the original pilot project in 2019. In the first part of the class, they engaged in physical activities to change up their screen-time routines and just to enjoy a moment of fun. Then, through screen sharing, they read along with the story Walking in the City with Jane by Susan Hughes, which traces the life of well-known journalist and urban activist Jane Jacobs from childhood to adulthood.

Jane Jacob’s story encouraged them to pay attention to their own physical routines and the way they perceive their neighbourhood. Some of them understood the importance of livable cities, while others were a bit scared about spending time out in the streets. But eventually, the objective of the lesson was fulfilled — the kids enjoyed the activity and talked about their streets.

In 2021, the project shared two more reading sessions. The first story was Marta and Her Bike written by German Zullo, about a unique orange cow who learns to bike and competes in bike races. As the country is seeing a rapid increase in cycling, with many cycle lanes being built around the country and a growing number of Ecuadorians competing in international cycling tournaments, many present-day issues affecting Ecuador appear throughout the story. With the story as a catalyst, children talked about wanting to take part in races and recognised the main argument of the story: tolerance between different people.

The last story was The Bike by Hernán Ronsino, the story of a young child afraid of riding a bike. Through this character the children were able to recognised their own fears and having a short discussion on how to overcome them. In all the sessions they were open to discussing the main arguments of stories and loved to share their experiences. Motivation and expectation about the Cycling Games were evident in the last sessions.

The end of the virtual learning period

In February, the Ecuadorian Government allowed students to return progressively to schools. The INEPE school started again with the activity at the end of February, allowing children to play and practice the Cycling Games for the first time.  The first day, they were immensely enthusiastic about it, and their parents agreed that this activity was crucial for the new school period, which will require more learning and interacting with other classmates and teachers. The program will continue until July with the same two groups of 5 years old students participating in one session per week, benefiting 38 students. In parallel, the data collection of this short class period has started, aiming to understand the outcomes on how kids improve their physical and social abilities after a long virtual period of the Covid pandemic. In September 2022, a new groups of kids will integrate, and hopefully, they will engage in the program for the complete school year of 2022-2023.

It needs your support

The Cycling Games project is a small seed that needs to grow to develop a deeply rooted and self-sustaining system for teaching and improving urban mobility in cities. However, it requires the support of private investors, non-profit organisations and public agencies in order to be implemented in more schools or neighbourhoods around Ecuador. For the case of INEPE school, monitoring of the project will continue into the next school years and will hopefully continue to produce effective results.

The first pilot of the Cycling Games Project in Quito has been internationally and locally covered by the media, showing the positive impact on young children’s life and the possible influence on their future mobility choices. With your support we can bring this program closer to more Ecuadorian children.

More about the initiative:
https://www.childinthecity.org/2021/09/10/cycling-games-promotes-danish-methodology-of-cycling-in-schools/

The worldwide project and the pilot project in Ecuador were presented by Lotte Bech and Amanda Padilla in the World Bike Forum in Argentina (FMB10) in September 2021. https://www.youtube.com/watch?v=uJcD2YLjA-4