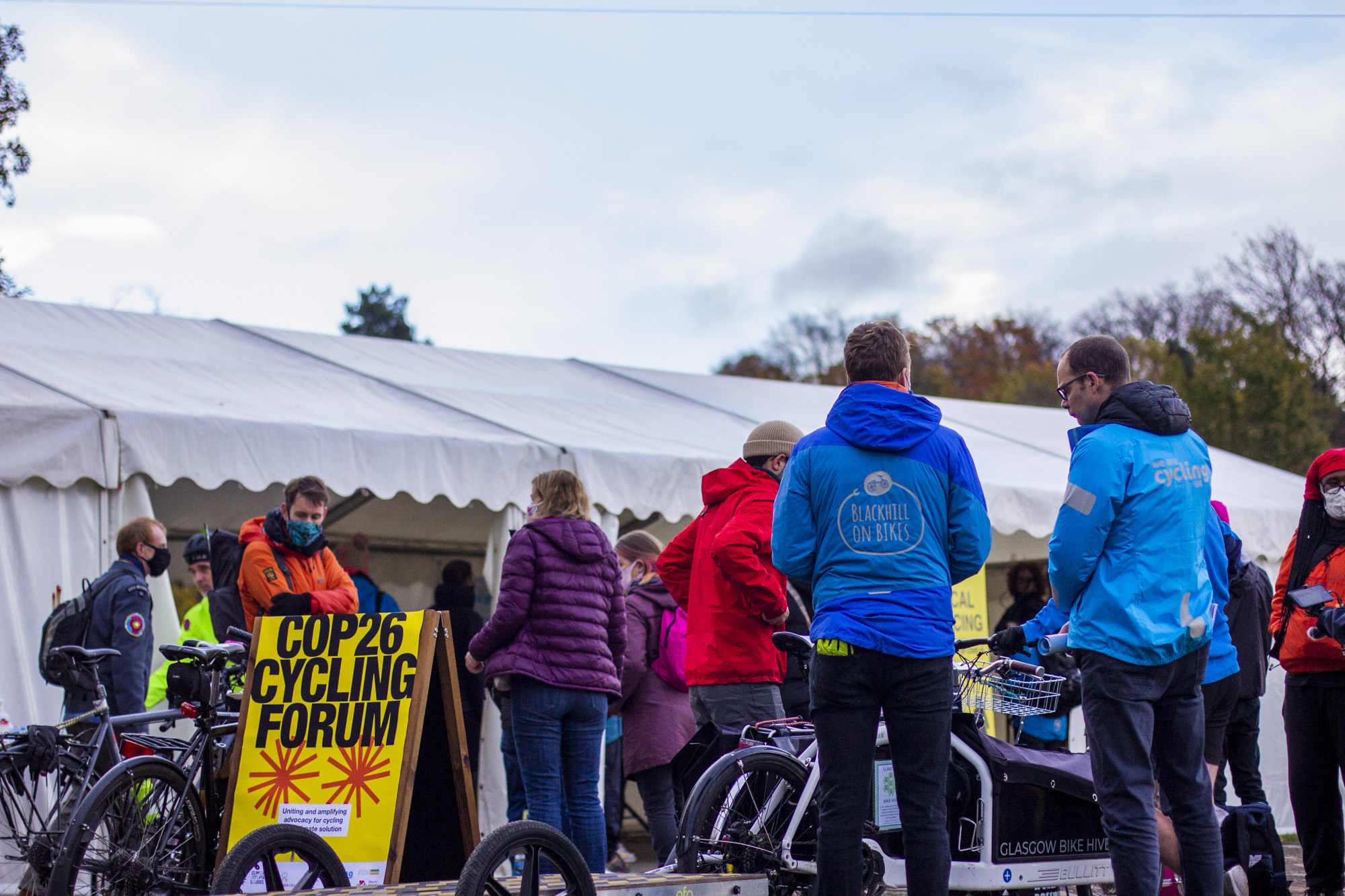 James Crossley (Creative and Communications Manager), and Julien Vincelot (Learning and Partnerships Manager), reflect on the opportunities taken and missed for active mobility at the UN Conference for Climate Change in Glasgow.

For a conference that hosts more private jets than wheelchair access ramps, it’s perhaps not surprising that when it comes to mobility policy, the humble bicycle (alongside other active, public and shared mobilities) is often left in the shadows; hidden behind whatever new shiny automotive industry backed phenomenon is currently in vogue. This year’s official program was no different.

However in a year that the COP has been almost unanimously deemed a failure of organisation, big lobbying and weak words, the power of the people outside the high security UN zones has been more loudly heard than ever. The cries from cycling advocates were boldly amongst them.

Beyond the bicycle-barren blue zone, cycling side events and initiatives included GOBIKE’s petition to stop the closure of bike lanes throughout the conference, CyclingUK’s THIS MACHINE FIGHTS CLIMATE CHANGE guerilla projections, Pedal on Parliament’s Pedal on COP, ITDP’s Cycling Cities Campaign launch, and many independent cycling journeys made by groups and individuals to prove that you don’t need a private jet to get to Glasgow. It was these rides and initiatives that BYCS’ own project the COP26 Cycling Forum aimed to unite and bolster, with a successful afternoon of talks and discussion about the future. Speakers included 16 year old climate activist Jessie Stevens speaking about her ride up the UK to reach Glasgow, Bicycle Mayors Chris Coyle and Richard Ingham sharing expertise in running community projects, and Cycling UK’s Head of Campaigns Duncan Dollimore who broke down the barriers and opportunities for cycling nationwide.

It is indicative of the zeitgeist of COP organisers that most side events were poorly communicated and located away from the centre. Crowning the Cycling Forum of Gartnavel Hospital’s beautiful yet peripheral location was Michael Pinsky’s Pollution Drift experience. While Glasgow’s central George Square was often empty, the pollution pod artwork remained mostly out of sight of both those in power and much of the public. This poor outreach, coupled with high security, meant that this COP excluded those that should have been at its centre. 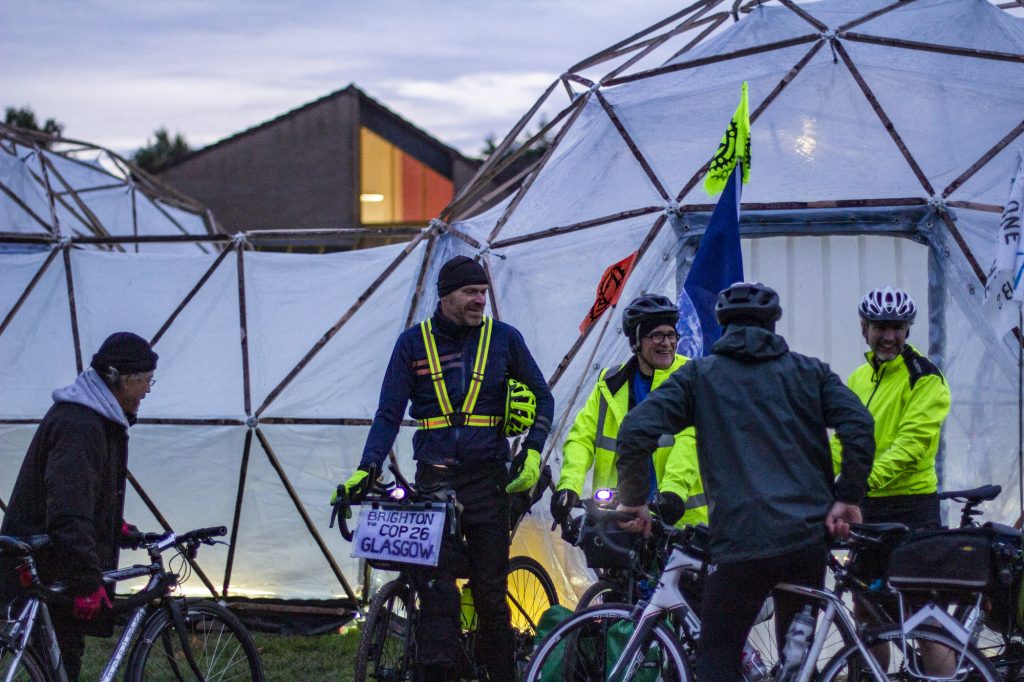 Within the official zones this couldn’t have been better illustrated than on transport day where industry presence was limited to 3 automotive executives who’s profit over planet motives were displayed with perfect clarity in their ‘electric is best’ rhetoric. Carlton Reid, transport correspondent for Forbes, conveyed this bluntly with a “WTAF” [that’s “what the actual fuck” to the less twitter savvy] and a screenshot of a message from Brompton Bicycle’s CEO Will Butler Adams sharing his frustration that despite having 750,000 people on bikes in cities across the world, his application to join the conference was denied. Similar feelings of personal and industry exclusion were well expressed in an opinion piece “Why did COP26 organisers fail to mention cycling for transport?” written by Mark Sutton, Founder of PedalMe. 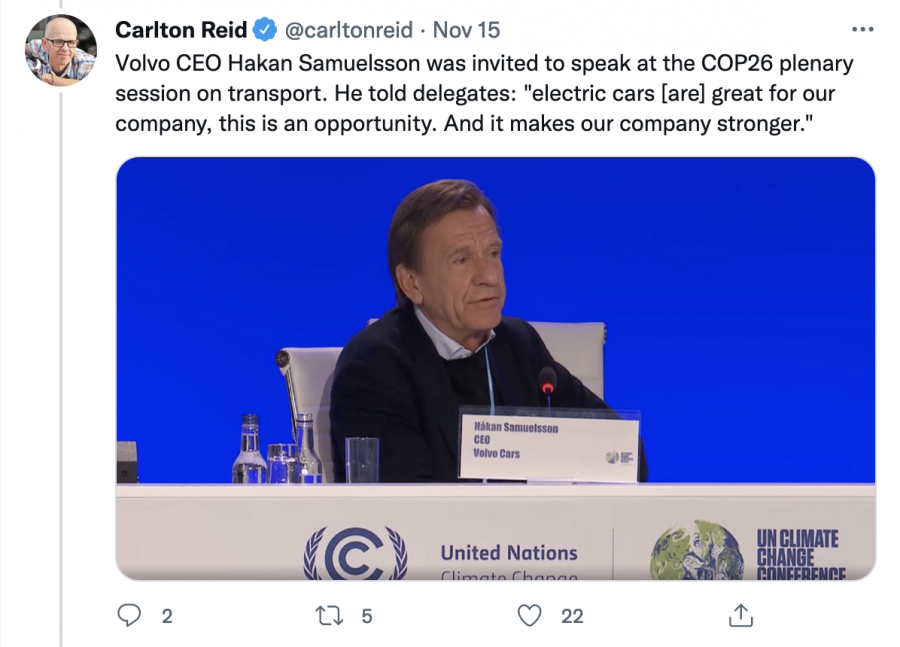 Cycling organisations do not lobby with millions of dollars in the same way that the automotive industry does. However a last minute win was made partly thanks to the organising of groups big and small by the European Cyclists Federation. Their open letter to governments, with over 250 signatures including BYCS’, contributed to a final line being added to the so-called Glasgow Declaration on Accelerating the Transition to 100% Zero Emission Cars and Vans. The declaration, previously without mention of anything other than vehicles, was amended to include, towards the end:

“We recognise that alongside the shift to zero emission vehicles, a sustainable future for road transport will require wider system transformation, including support for active travel, public and shared transport.”

It’s not much (45 words tagged at the end of a 745 word document), but it highlights the importance of advocacy work.

In reality, the enthusiasm for active mobility seems to come not from the stubborn transport sector, but from the Health and children’s rights spheres. The Global Conference on Health and Climate, held at Glasgow Caledonian University on Saturday 6 November, just as climate activists were marching through the city, put front and centre the need to divest from fossil fuel. Today, while we know the danger of climate change and air pollution for our health, our societies still invest 21% more in fossil fuels than in renewables, according to Jane Burston, Director of the Clean Air Fund. A natural solution that kept coming up throughout the health conference was the need to shift to active mobility in cities to reduce greenhouse gas emissions from urban transport, and much emphasis was put on the health co-benefits of such mobility behaviours.

Although it might seem obvious that in order to have our voices heard we need to be embedded in broader intersectional coalitions of different parts of society, it can take the perspective of a child in a busy street to make us realise the urgency in tackling our society’s dangerous addiction to the car. Thursday the 11th’s event Cities 4 Children, our climate, our future: an intergenerational dialogue brought together an impressive and diverse list of speakers including youth and those from the Global South, with the focus of the conversation revolving around fairer uses of spaces to support children, with a spotlight on active transport.

This criticism is not to say that cycling advocacy is THE answer and has all the solutions. There is much to learn, particularly from indigenous communities, whose voices were heard in force at side events and received token attention in some UN spaces, and a long way to go to be inclusive of all people represent all and create change that is sustainable.

What seems increasingly clear however, is that the solutions for this needed change already exist. From cycling for clean urban mobility, to taxation of emissions to conservation of wild lands. What is still absent is willingness from the top political and corporate classes to commit to action for real change. However it is perhaps this disappointment that enabled what could be seen as this conference’s biggest achievement: uniting civil society around the narrative of urgency around the climate crisis. The longer people are ignored, the louder they will shout. And those shouts need now to not aim for compromise and incremental change. Compromise is not an option when the planet is on fire. We need massive, impactful and inclusive change in our cities, and an exponential growth in cycling is a critical part of that. 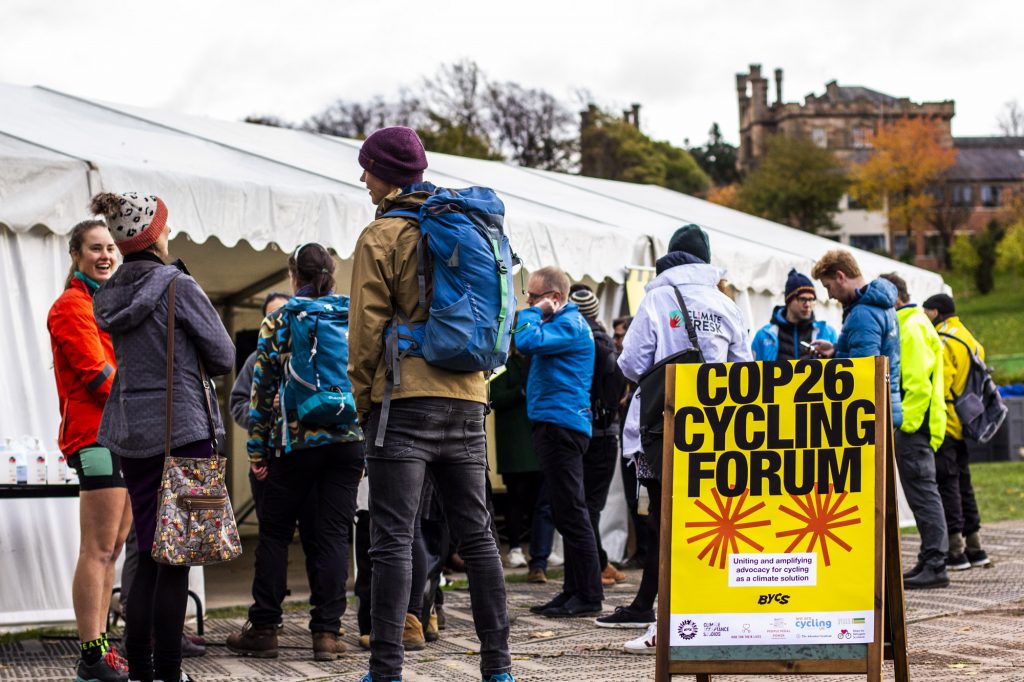