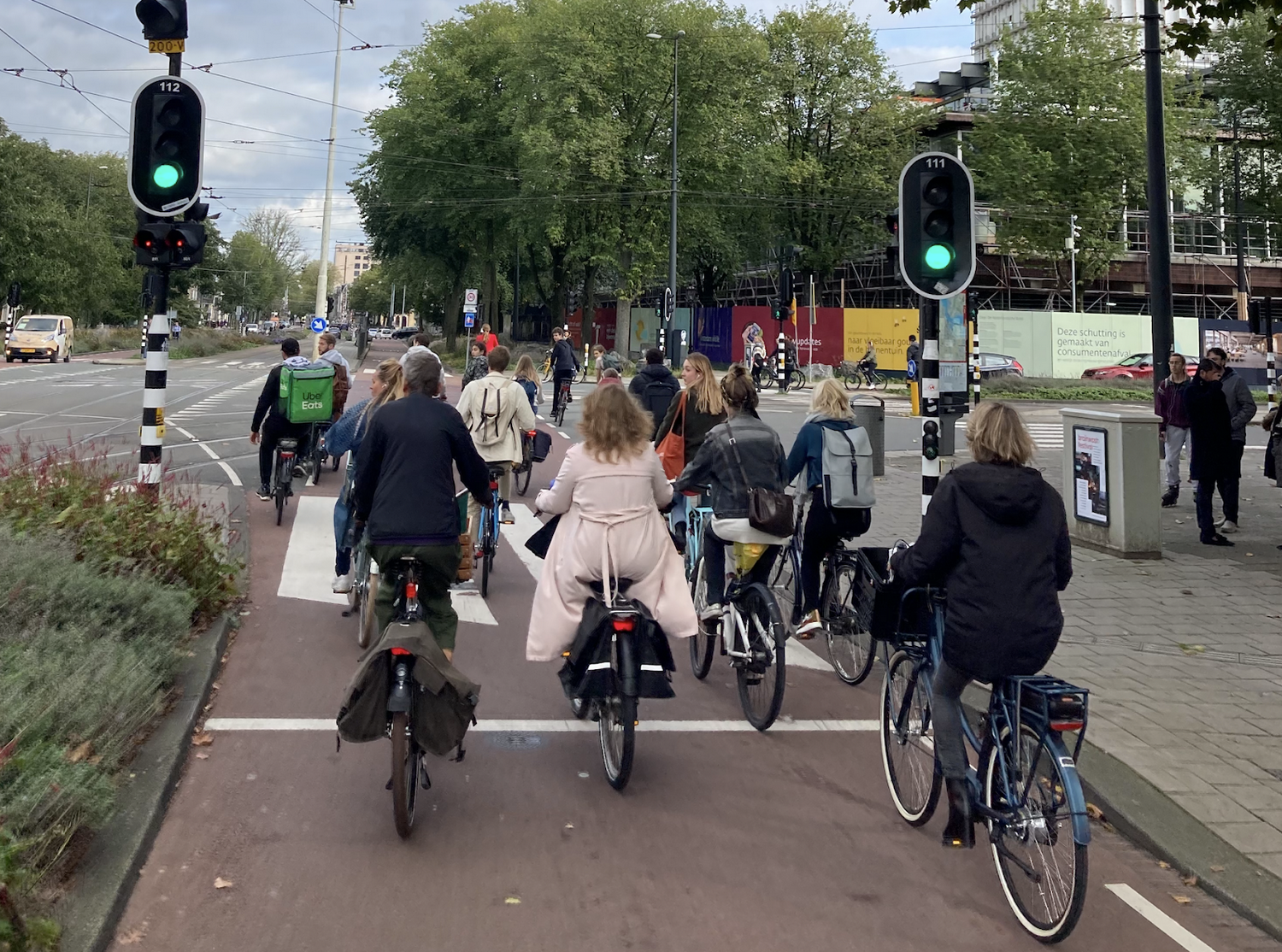 Over 100 world leaders will gather in Glasgow for the COP26 between October 31st and November 12th, alongside around 20,000 people expected to attend the formal talks and side events throughout the city. With the IPCC’s damning report front of mind, and against the backdrop of this year’s intensified natural disasters and COVID-19 pandemic, true commitments to action across all segments of society are more urgent than ever.

Road transport accounts for 10% of global emissions, and its emissions are rising faster than those of any other sector. In major cities, transport represents close to 33% of total urban GHG emissions. National policy solutions, including those on the COP26 agenda, remain disproportionately geared towards a transition to zero emission vehicles. While decarbonising transportation is absolutely necessary, a meaningful decrease in transport emissions in line with climate goals will only be achieved by shifting reliance away from private vehicles to prioritise active, public, and shared transportation. To this end, our team will embark on the 10h journey aboard the Climate Train from Amsterdam and join the organisations gathered in Scotland intent on promoting cycling as one of the most sensible solutions to many of our pressing urban challenges.


A Tool to Significantly Reduce Emissions

There exists an abundance of scientific research showing the benefits of cycling as a tool to reduce carbon emissions. Researchers from the University of Oxford’s Transport Studies Unit for example, published in February 2021 the study “The climate change mitigation effects of active travel”, that analysed travel activity data from 3,836 participants across seven European cities, who completed 10,000 travel diary entries. They found that those who switched just one trip per day from car driving to cycling reduced their carbon footprint by about 0.5 tonnes over a year. This represents 67% of an average average citizen’s carbon emissions from transport. Additionally, the study found that those who already cycled had 84% lower CO2 emissions from all daily travel than non-cyclists, further demonstrating the population benefits of travelling actively that already exist and could be widely increased.

When comparing emissions at the level of individuals, cycling UK has also illustrated the power of cycling as a climate mitigation tool in its recent COP26 call to action. Cycling just 4km and back (about 15 minutes) instead of driving saves 1.1kg C02/day. Switching to a renewable energy provider in comparison saves 0.6kg C02/day, and planting 10 trees saves 0.68kg C02/day, only once fully grown. Given that in most countries, the majority of private vehicle trips are under 5km, promoting cycling as the preferred mode of travel is a logical strategy to begin tackling ambitious emission reductions targets per person in order to reach the goals of the Paris Agreements.

Already in 2015, a study by the Institute for Transportation and Development Policy and the UC Davis Institute of Transportation Studies concluded that an increase of about 20 percent in cycling worldwide could “cut carbon dioxide emissions from urban passenger transport by nearly 11 percent in 2050.” While this modal share increase may seem “dramatic”, the COVID-19 pandemic, with its accompanying rapid investment in cycling infrastructure and policies in support of cycling, have shown that even more ambitious targets can be set in the face of the urgency of the climate crisis. The rise of e-bikes for example holds great promise in replacing longer journeys, with 61% of people in France trying electric bikes in order to replace car trips. 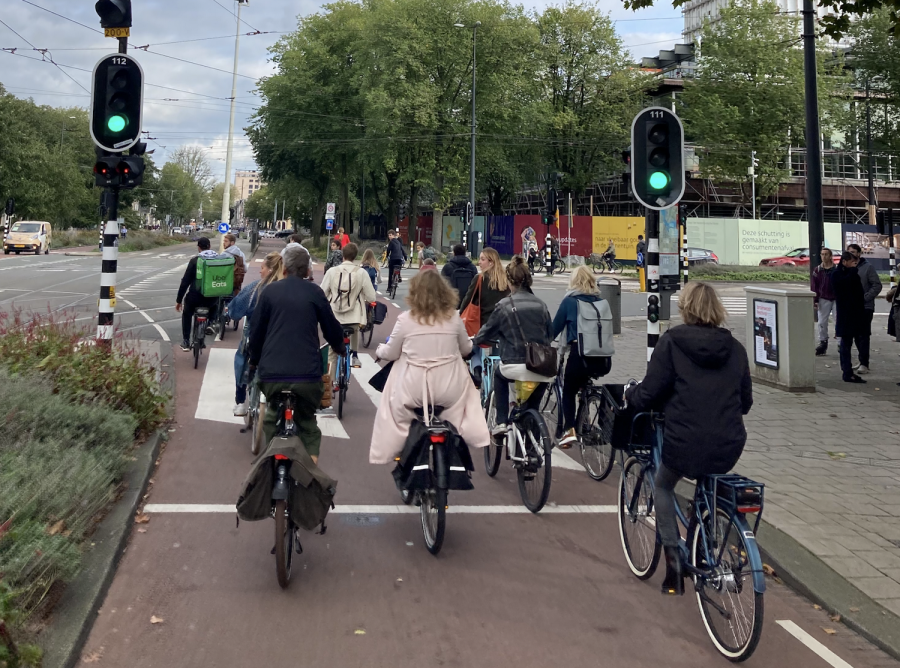 Cycling Combats More than One Crisis

In addition to this significant reduction of emissions, cycling also provides a myriad of other benefits to individuals and society that should encourage decision makers to centre cycling further in their policies, both at COP26 and beyond. In the EU, where more than 7 percent of urban trips are completed by bicycle, the net economic benefits of bicycle infrastructure improvements have been estimated to be as high as €513 billion annually, accounting for reduced costs associated with health expenditures, congestion, fuel consumption, air pollution, and more. The European Cyclists Federation aggregated these vast benefits in 2018, such as reduction of air and noise population, decreased congestion, fuel savings, increased mental and physical health, as well as greater social cohesion and cultural acceptance, to name a few. A simple glance at this document should bring clarity to all policymakers and other key stakeholders, yet most national governments are still failing to embrace cycling to reach global climate goals quickly and effectively.

The effects that such policies could have are already visible in the Netherlands, where about a third of all trips are by bicycle. Cycling prevents 6500 Dutch deaths each year, and extends the population’s life expectancy by half a year. In economic terms, these health benefits correspond to more than 3% of the Dutch gross domestic product. The national government’s 2018 “Cycling Facts” reports that two-thirds of Dutch residents aged 18 and over associate cycling with joy, and that “people who walk or cycle to work tend to be more satisfied, less stressed, more relaxed, and experience greater freedom compared to people who drive their car to work.

Cycling should then be understood as a means to create resilient, liveable and inclusive cities. It is a tool to tackle climate change while addressing urban challenges such as mental health, sedentarisation, economic inequality. The World Health Organisation echoes this reality in its recently published COP26 Special Report on Climate Change and Health. They propose a set of priority actions from the global health community to governments and policy makers, notably emphasizing a need to “reimagine urban environments, transport, and mobility” by prioritising walking, cycling, and public transport, reducing private car use and creating people centric cities. 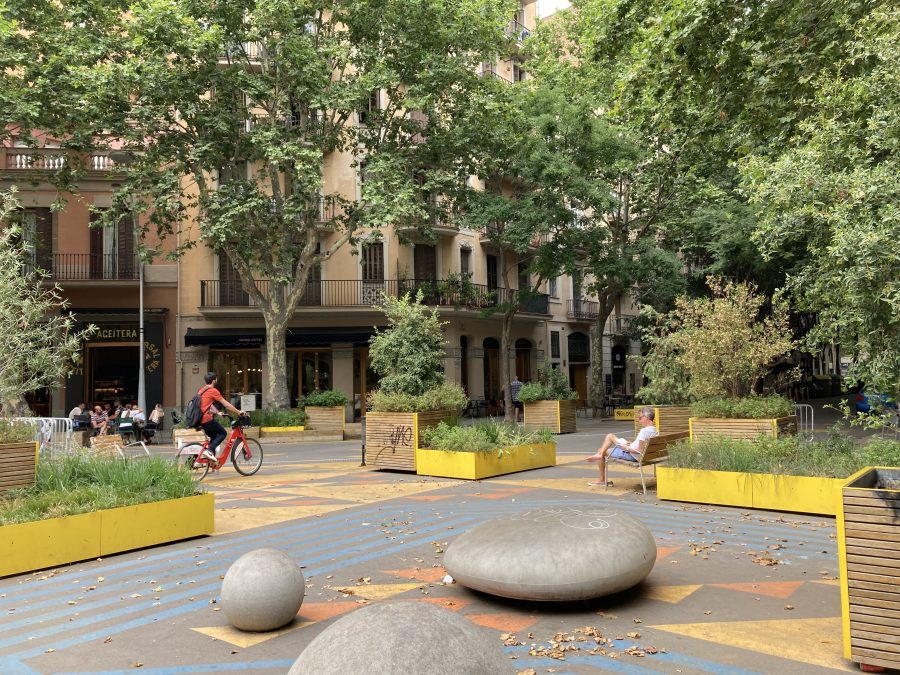 A superblock in Barcelona. Photo by BYCS

A call to action:

There is thus a pressing need to shift our mobility paradigm towards one that centres cycling and walking for a majority for local trips, complemented by public transportation and shared, electric vehicles only when needed. The evidence makes a clear case for governments to enhance pro-cycling policies, philanthropies to increase funding for active transportation, and individuals to start cycling for short trips.

Strong leadership, collaboration, education, awareness building, strategic research and communications will be needed to make this a reality. Our approach will also have to be holistic. Alongside changes in the built environment to facilitate cycling, a shift in attitudes, habits and perceptions will be key to establish and normalise active mobility in the transport culture of current and future generations.

On November 1st, we will facilitate the COP26 Cycling Forum — an event bringing together individuals and organisations cycling to, and representing cycling at COP26. The event, held at the Gartnavel General Hospital will celebrate ongoing achievements, and gather momentum for propagating cycling’s critical role in the climate crisis. We hope you will join us.