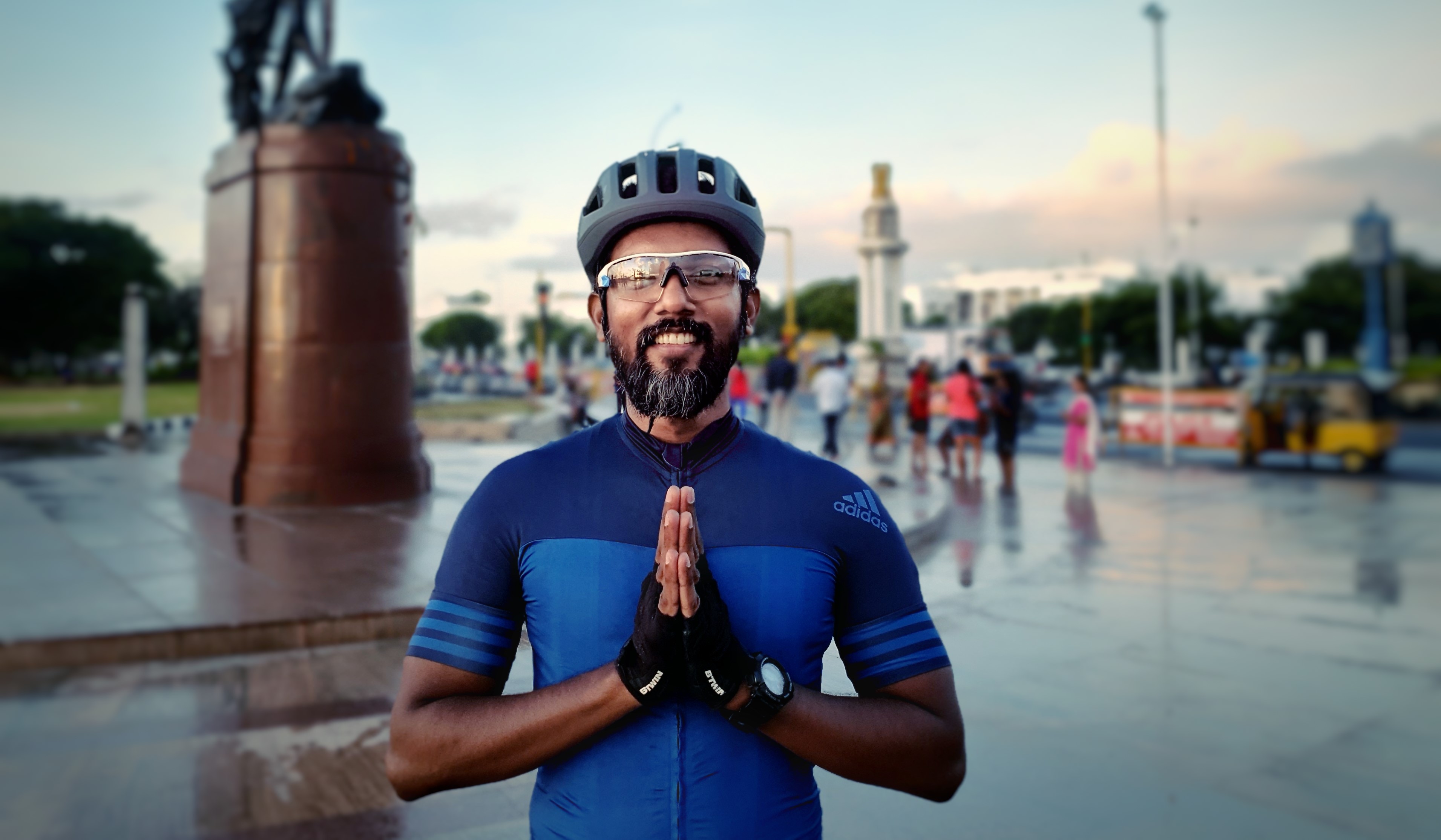 6 min read.
Felix John is a member of the Chennai Cyclists group WCCG. In 2019, he was appointed Bicycle Mayor of Chennai, India.

How did you become involved in Bicycle Advocacy ?

I didn’t plan to become a bicycle advocate. It was an accidental love affair. Initially I was riding for fitness, and then promoting cycling at the neighbourhood level became an objective of the group I was part of. I originally thought that encouraging riders to cycle more and making awareness campaigns was enough, but have since taken a leap upon realising how much needs to happen between various stakeholders to enact true change.

Chennai is a city that is rapidly growing while facing several manmade and natural vulnerabilities. What are some of the biggest challenges that the city needs to tackle to become more resilient?

Like most cities across the world, Chennai faces stark climate challenges. Year on year we are facing water shortages while simultaneously facing natural calamities such as and rising sea levels and typhoons. I live in by the seaside, and am well aware that I will probably have to reallocate in the next decade. We also face other factors such as air pollution due to both transportation and industry. Chennai is a hot and humid city, and temperature extremes have only been getting worse.

The climate crisis thus needs to be the important talk of the day. In the context of resiliency, every time Chennai faces a disaster we always come out with new hope, but that dies down within a matter of months. It is a cyclical pattern, where we come up with new projects that fizzle down as time progresses. We must keep up the momentum to recognise the importance of actions to curb climate change. Resilience means that strategies must be sustained over time. We must have consistency in our commitments: whether we are talking about food, water, waste, or clean transportation.

Traffic & congestion is mentioned as a major issue in the city’s citizen perception surveys. How do you think the bicycle can be positioned alleviate public transit and offer a viable alternative to cars?

It’s indeed a vicious cycle, however starting by focusing on short trips can lead to transformation. In Chennai, especially during COVID-19, a lot of people took up the bicycle for fitness reasons, which then can trickle to commuter behaviour. Encouraging a healthy lifestyle can thus be leveraged to promote the use of the bicycle as a viable tool for daily mobility and build upon the momentum that has been created during the pandemic. In its early stages, we witnessed European countries providing safe cycling ways and walkable paths. This was not being discussed enough in India at the time, and myself and members of the cycling community wrote letters to the traffic commissioner, police commissioner highlighting these issues.

More broadly, we have a very long way to go. We lack organisation from both a policy and infrastructure angle, that are almost solely focused on motorised vehicles. There is very poor infrastructure for safe walking and cycling, and not many tangible physical improvements for active transportation. On a more positive side, the mentality of people has really evolved.

If I think back to 5 years ago, city stakeholders would laugh at me if I spoke about cycling as viable alternative transportation. Today, they understand that non-motorised transportation is one of the most important mobility topics. Other projects however still take precedence over bicycle infrastructure. Recently there have been some good initiatives such as temporary pop-up lanes however many of these were unfortunately discontinued. Bicycles were allowed on metro trains during the month of February for example but this pilot was also discontinued. I’m trying to bring it back.

There are also interesting new initiatives such as Cycle 4 Change from the national government, or Streets for People initiated by ITDP, however I still see them lacking in community engagement. There is a need to get on the ground and really speak to people to understand their needs. Using social media can also be an important platform to highlight the benefits of cycling and the importance it should take in the promotion alternative mobility. 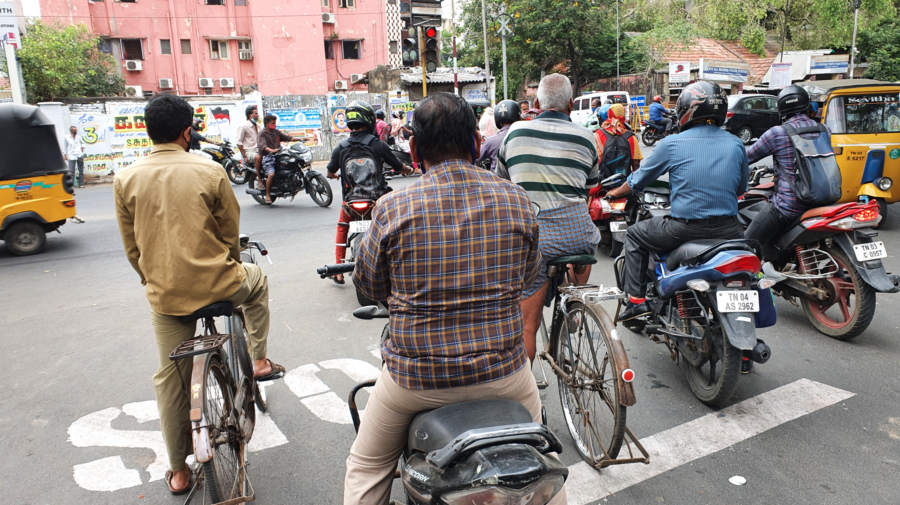 The pandemic put a strain on mental health, capacity for physical movement, and people’s economic opportunities. What needs to be done to promote the bicycle as a tool to reactivate these issues?

India is facing an economic downturn due to the lockdown. People eventually have to move. After the lockdown, there will be those who dare to use public transportation and those who won’t. Those who can afford to get a private vehicle will get one. We were already a very congested city prior to the pandemic and caught a glimpse of nature trying to heal itself during the first lockdown with better air quality. In this regard, civil society is key to encouraging the use of non-motorised vehicles. In Chennai there is a large segment of the population that depends on public transit and cannot afford a car. Including their voice and their needs in cycling strategies is essential, and I’m trying to work with the authorities on this.

In order for a reactivation through cycling to happen, a number of barriers need to be addressed. Firstly, car reliance needs to be curbed iteratively. Trying out cycling for small small errands and commutes can bring about more sustained change over time. Integrating cycling in daily routines is essential. Once people start using the bicycle even for physical health purposes, they will have more ease in shifting for transportation. We are well positioned at the national level to achieve this, as 37% of households here own bicycles in Chennai, even though most are unused. It becomes a question of nudging people to try it out again. Another important barrier is that of social stigma. In India, people still perceive motor vehicles as a status symbol, but things can changing as more people try it out and it becomes normalised.

What do you think needs to be done to sustain the momentum of cycling?

Encouraging uses for particular demographics and specific trips is the first step. Shifting the mentality of transport behaviour and showing the risks of regressing to past patterns will play an important role in changing mobility habits. People don’t want to go back to sitting in traffic and pollution, and we should capitalise on this fact.

Regarding new cycling infrastructure, it needs to be promoted properly, on the ground, ensuring that people recognise it and use it. Stakeholders need to continue engaging with communities to make them feel heard and included in cycling strategies. If you want people to use bike lanes or bike share systems, the appropriate information and awareness needs to be made. Car advertisements are everywhere, why don’t we do the same thing with bicycles? I don’t necessarily favour more commercials, but levelling the playing field and highlighting alternative mobility modes is an important part of the puzzle. Promoting a culture of non-motorised transportation needs to become ubiquitous, in the papers, on TV, online. Strategies like nudge tactics can help too.

Combining this promotion with the adequate physical environment can create a radical shift. I recently met with the British Deputy High Commissioner Oliver Ballhatchet, and we talked about how cycling investments in protected infrastructure in London led to more people out in the streets. In Paris, Anne Hidalgo’ strategy has also shown clear results: consistency in policy and investments matter. Being an advocate means continuing this commitment over time, continuing to be vocal and initiating conversations with the right people. The bicycle as an instrument for resilience needs to get more recognition and attention. 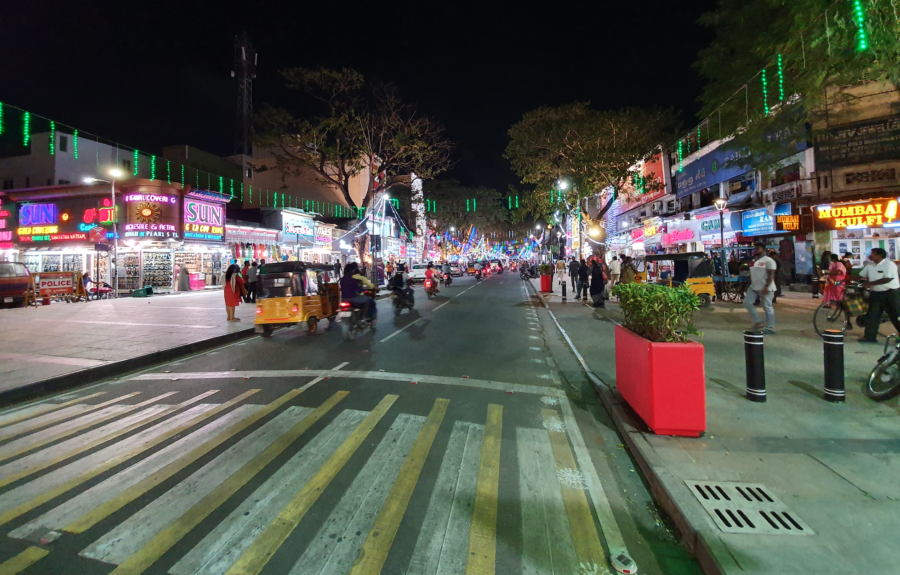