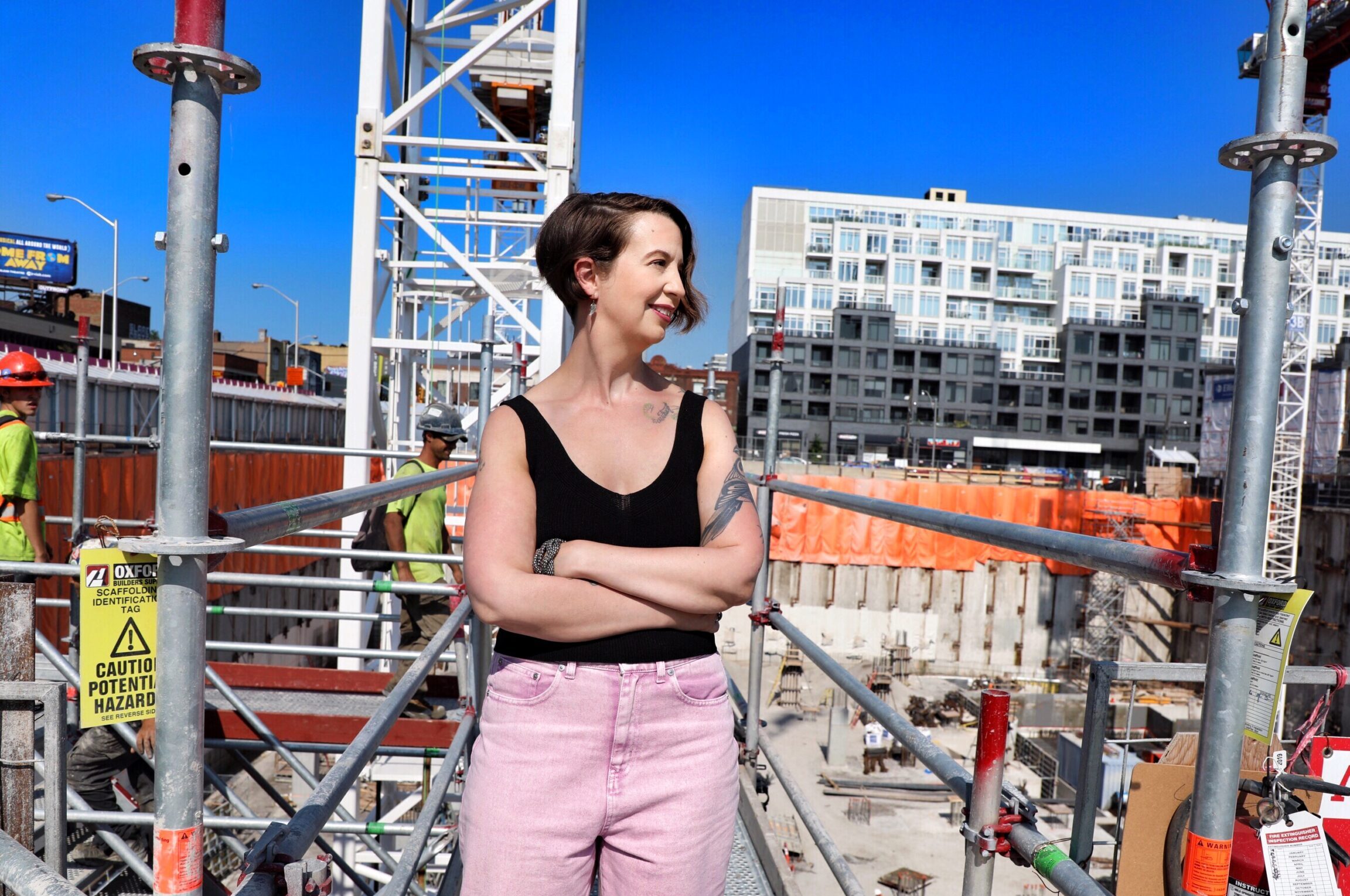 8 min. read
Leslie Kern is an associate professor of geography and environment and director of women’s and gender studies at Mount Allison University. She is the author of Feminist City: Claiming Space in a Man-made World and of Sex and the Revitalized City: Gender, Condominium Development, and Urban Citizenship.

What are the key tenets of a feminist city?

One of the main tenets of the feminist city that has become visible even more so during the pandemic, is about care and care work. The feminist city has to be a place where both the paid and unpaid care work, often done by women, racial minorities, and young people, is valued and supported. In many ways our cities are not set up to support this work, either through our mobility networks, our social services, our public spaces, and this has been really heightened during the pandemic.

Some other key elements that I think are related to this are questions about housing, its form, affordability and location. Safety is also a concern, not just for women as a group but for all people who experience different forms of marginalisation and precarity in the city. Crucial to this thinking about safety are notions of policing and top down enforcement as well as imagining a city where safety comes from the bottom up, from everyone being supported and having what they need to be safe, stable and cared for.

Could you expand on the gendered experience of urban mobility and how travel through the city has historically favoured the movement patterns of men?

Those movement patterns have really been designed to facilitate the smooth and efficient movement of the economic breadwinner, often the male of the household who goes to work from home in a very linear pattern that occurs at particular times of the day and that involves coming from the outskirts to the centre of the city.

Decades of research on women’s mobility, and this seems to hold true in all sorts of global contexts, not just North America, show that women’s journeys throughout the day are much less linear and involve all sorts of tasks: journeys from home to paid work, taking kids to school, running errands for the household, checking on elderly parents, or doing volunteer work. All of those additional duties that tend to disproportionately fall on women are being done as part of their mobility journeys but transit systems aren’t set up to do so easily. You either have to pay multiple times to get in and out of the transit system, or buses don’t run in and out of residential areas beyond the 9-5 schedule. You have to go from the outskirts into the city centre and then out again to get to another neighbourhood for example. Additionally, these networks are not always designed with the safety of women, pedestrians and cyclists but for the efficiency of the car primarily and also of mass transit, so in many ways the needs of women and caregivers have not been well prioritised within mobility planning.

Do you see a link between policies that favour active travel and feminist cities? What are your thoughts on the renewed ideals of proximity brought to the fore by the 15min city principle for example?

Absolutely. For many decades, feminists have been writing that a woman’s place is in the city, and this has a lot to do with questions of proximity and active mobility. Suburban environments are more isolated, there is a greater separation of work, home, leisure consumption and school spaces so you tend to need a car, whereas in the city there is a greater chance that these things are better integrated. For those who have to juggle the responsibilities of paid and unpaid labour, having all of those needs in close proximity is really important.

I certainly found that to be my own experience as a mother of a young child. When living in London and Toronto, it was much easier to integrate those aspects of my life. So yes, the renewed interest in the 15 min city ties quite well to feminist conceptions of what the benefits of city living are, but for me, one of the big questions about that is what of privilege and access. In many cities, gentrification has made those dense, amenity rich, and well connected urban areas very expensive to live in. The people who would benefit the most from those connections such as single mothers, recent immigrants, people working 2-3 jobs to get by thus can’t afford to live in these spaces and are pushed out to less connected spaces where they don’t get the benefits of density, mobility and proximity.

At a moment where access to public spaces is unequal, increasingly privatised and under surveillance, how can community relations and an inclusive sense of the collective be fostered?

I certainly hope so. Again, the pandemic has made more people notice those factors of public space you mention. They have been privatised, corporatised, over-policed or made into barren places where there are no benches, no shade, shelter, bathrooms or water fountains. These are very human-centric elements for people to feel comfortable and supported that have been stripped away from our public spaces. I’m hopeful that as many of us have needed to rediscover public space in order to be outside of the home in a safe way, we can reimagine them as sites of social gathering, but also as spaces where some of that collective care work can happen. Activities such as feeding people, teaching children and adults, and other such roles that are so often confined to the home place a burden on the family and women in particular. Can we see our public spaces expanding in their usefulness to really support all of us?

There’s a passage in your book where you cite Virginia Woolf’s experience of walking unseen through the streets of London, and explore how the experience of flanerie is fraught for women. How do you see the experience of riding a bike in terms of opportunities for freedom and flanerie?

The question of whether women can be a flaneur or flaneuse has occupied people’s imagination for some time now. There is a contention as to whether you can truly be invisible in public space as a woman, or really blend into the crowd as you are often objectified in a sexual manner, experience harassment or unwanted attention for example. Women have constant vigilance around safety. An awareness of your surroundings, who is there, how they are looking at you, where your escape routes are, is constantly in the back of our minds. That impacts how we move through space and what kinds of places we go to.

The question of cycling is a great one to consider here. Does having access to a bicycle enable a greater amount of autonomy and ability to control your movement in a way that walking, with its slower pace might not, is probably something that women experience in choosing a bicycle in the city. Of course, this mode of mobility is not immune from harassment, physical touching, and attacks. There are some gendered elements around safety and comfort that bicycling does not completely eliminate. It does also however decrease reliance on slow bus schedules when trying to do a lot of things in the day. It’s a lot more freeing in that way.

Activist spaces, very much so in the realm of cycling, are often male dominated and can perpetuate these patriarchal power relations. What do you think needs to be done to move beyond this?

Progressive movements, activist groups and moments of protest are not immune from the power relations that exist in interpersonal, institutional and systemic ways in society. Often, we see that in progressive movements, the voices that get elevated are those of men, white people, able-bodied people, cis gender people. The stories that we tell about historical social movements tend to prioritise those familiar faces and weave out the stories of those that are more on the margins but that might have been more actively involved. Thinking about the Stonewall for example, the erasure of the presence of black trans folks in igniting these protests.

In my own experience in labour movements, I’ve witnessed this where sometimes the enthusiasm of some of the participants means there is machismo that gets reproduced. Especially if some conflict is at play, men step into these roles that perpetuate patriarchy and women often are relegated or finding themselves in these caretaking roles such as making sandwiches for the march, engaging in medical and mental health care or just calming things down. Gender roles can be reproduced in that way and that can lead to burnout or dropout from marginalised people who not only want to fight the system but also having to fight for their place within the movement as well. I’m sure it’s no different in cycling movements, where people want their voices to be heard and not be seen as secondary issues. It can’t be that once we figure out the issues about infrastructure then we’ll talk about gender, safety or disability.  These are core elements of the movement and not secondary priorities.

A lot of issues that are overlooked are due to inadequate public consultation and stakeholder engagement. How do you see the relationship between planners, policy and civil society in co-creating the feminist city?

There is an interest and willingness on the part of many people involved in planning, who go into it because they want to make the city a better place. They have ideals and visions, but are limited by bylaws, government growth and agendas and of course corporate involvement in much of what we call city building and development these days. A renewed planning emphasis on sustainability, equality, justice would involve bringing citizen groups, communities, neighbourhoods more closely into the planning process. It might make it slower initially but saves time and money in the long term. Recognising the inequities that come from so much of the typical ways we do consultation, for example looking at the groups that are left out, is also a first step. How does someone with children come to this meeting at 7pm? Whose voices are likely to be heard or seen as legitimate on an issue, what language are we communicating in, or is the building accessible where people with disabilities can enter? These basic questions are often not considered in the planning and consultation process and are really important in involving the community in a wide way.