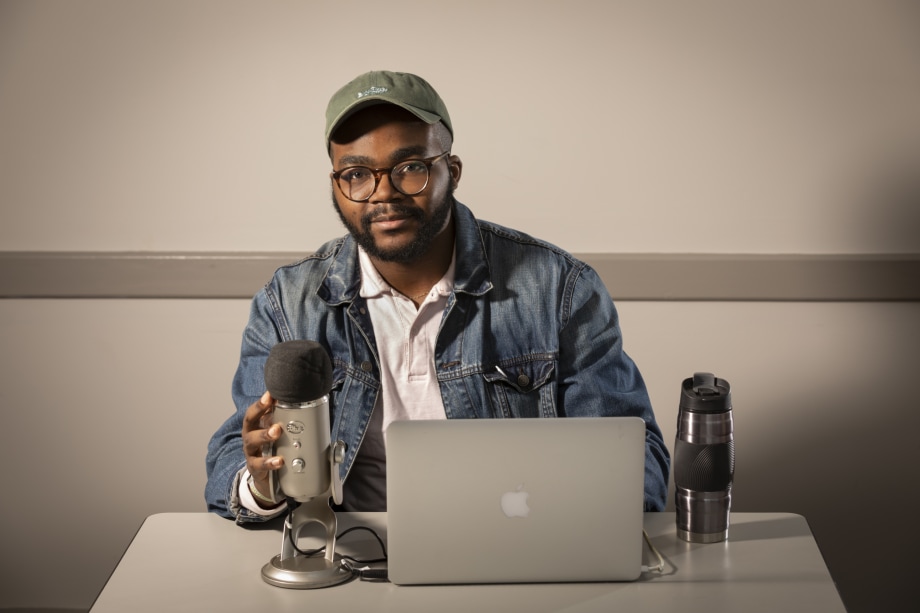 6 min. read
Max Jordan Nguemeni Tiako is a 4th year medical student at the Yale School of Medicine, and a visiting fellow in the Center for Emergency Care and Policy Research at the University of Pennsylvania. His research interests include cardiovascular health, addiction medicine and the built environment’s impact on health. He is the host of “Flip The Script”, a podcast focusing on health disparities.

What are some of your principal research interests in regards to urban health, and what is your involvement in the Urban health Lab ?

I’m in my last year of medical school, and have spent the past year doing research at the Center for Emergency Care and Policy research at the University of Pennsylvania, where I was a member of the Urban Health Lab more specifically. During this year, I’ve focused on the role of residential tree canopy cover on health outcomes. I looked at hypertension in pregnancy, mental health, and perceived stress. When we think about urban health, I also looked at issues such as access to substance use treatment.

Sound pollution is still relatively under discussed when thinking about urban health. What are some of the biggest negative effects of overexposure to sound in urban environments?

Noise pollution research is indeed a relatively burgeoning field. Understanding noise pollution not just through measures from instruments that the state might be providing but in terms of how people perceive it is important. Mental health and other quality of life measures can be severely affected by it. There is good evidence, for example, that perceived noise pollution is associated with sleep disturbances. Sleep is central to so many health outcomes such as stress, anxiety, depression, even obesity and capacity for physical activity.

In my research of hypertensive disorders, one of the potential pathways I saw to help was to implement greater tree canopy cover. There is prior evidence that perceived noise pollution is associated with preeclampsia, one of the hypertensive disorders of pregnancy. Tree canopy can act as a buffer to perceived noise pollution and thus be a productive strategy. Trees are a literal sound barrier, they are protective against traffic noise, especially for people that live close to a highway or busy thoroughfares.

Transportation and Industry are two of the most important sources of environmental noise. Airports, industrial sites, and highways tend to be built near low income families and communities of colour. Could speak about the link between structural racism in urban planning and environmental noise?

Highways run through a lot of US cities, literally dividing and fracturing Black communities from the rest of the city. Some of this is by design, and a conversation is finally starting about giving support to cities that want to get rid of those highways that are so detrimental to those communities. The Biden administration is starting to talk about taking on this challenge.

I can use New Haven, Connecticut, where I’m living right now, as a good example. I live downtown, I go to study at Yale New Haven Hospital  which is adjacent to a Black Community, in the Hill. There is some history that is little known in regards to our hospital’s relationship with that community that has been documented by historian and Paediatrician Dr. Sakena Abedin. We are also very close I-95, one of the biggest highways in the US, that goes from Maine to Florida. A highway connector was built to create easy access from the shorelines to downtown of the city. In order to build it, a lot of housing needed to be destroyed, people needed to be displaced, and created air and noise pollution in nearby homes. What this also does is cut people from certain parts of the city. I’m on one side of the connector where there are amenities, shops, but the Hill neighbourhood is on the other side, where the highway divides and creates a physical frontier.

The presence of a connector is also a safety issue due to people speeding onto the highway. People get hit by cars when they walk or go on their bikes. It’s a concrete example of how both state and private actors have worked to use highways for some given benefit which ends up having a huge impact on structurally marginalised communities, specifically Black communities.

Do you think the negative effects of traffic noise could be better leveraged to promote pro-cycling or walkability and greening policies?

Absolutely. The link is already made, and people make the argument in compelling ways, but it boils down to whether the lawmakers want to hear it. This isn’t a very democratic law making country, conservatives are extremely overrepresented in the Senate. The activation energy for getting these policies done in terms of legislation at the federal level is hard. Most large cities are run by democrats but the budgets are set by the state so the state legislature has engaged in the worst kind of gerrymandering.

Cycling infrastructure, bike-share and initiatives like open streets can help bring about quieter environments by promoting active mobility. They are also at times cited as sources of gentrification. How do you feel about that link?

Typically in a gentrifying neighbourhood you tend to see newer residents ask for things like bike lanes, more policing, and you witness increased 311 calls for noise complaints. A lot of it has to do with cities not investing in poorer neighbourhoods in the first place.

In regards to cycling, there are accessibility issues for many communities. There are great inequities in bike-share docking station distribution for example. In cities like NYC, Boston, San Francisco or Chicago, bike-share is more accessible to people who are white and have white collar jobs. There is already a bike-share distribution issue that mirrors other geographic inequities. Payment systems are also not accessible.

There is good evidence that cities that were previously redlined, a process where racial residential segregation was essentially sponsored by the government, continue to suffer from disinvestment from the government. Lack of tree canopy is correlated with previously redlined areas, among other things. There is a lot to be done from that perspective. Better engagement at the community level, and intentionally sharing those benefits that typically only come as gentrification occurs is important.

Slow streets are a strong example. Oakland is doing a great job with community engagement there. Philadelphia was also blocking certain streets for people to play in the street, creating an extension of the park, helps with physical activity and creates a quieter environment. In areas where streets aren’t adequately greened though, this isn’t enough. Slow street strategies need to be congruent with other elements of street design related to beautification. If streets are greened and beautification efforts are carried out, people feel a better sense of community. My research mentor Dr. South has studied how greening vacant lots leads to a greater sense of cohesion, greater perceived safety, perceived decrease crime due to positive psychological effect of neighbourhoods looking better.

How can sound inequity be better articulated with other issues of urban health when advocating for healthier neighbourhoods?

I think in making the argument for greening initiatives, we should more explicitly discuss how much of a barrier tree canopy is against noise pollution. People complain about noise, but the neighbourhood level noise is so much less detrimental to physiological well being than traffic. We need to emphasise that. Slow streets, decrease traffic, so that connection needs to be made more clearly.

For those that live near highways and industrial plants, it is time to start lobbying to take highways out. We should bring noise pollution to the forefront of this conversation. People think it’s just a logistical question of fractured neighbourhoods that prevent access to certain parts of the city, but it’s also a question of health. Those walls along the highway are not always understood to be sound barriers. There is a need to increase artificial forests around them to clean the air and reduce sound.

Creating a robust environmental studies curriculum in schools is also something that I think is needed to bring awareness to this issue. If you haven’t studied it, it can be difficult to understand how noise affects us, as it is taken and accepted as a given in cities. This is something we have created and is not a finality. Consciousness raising is one piece of the puzzle to accompany policy change.