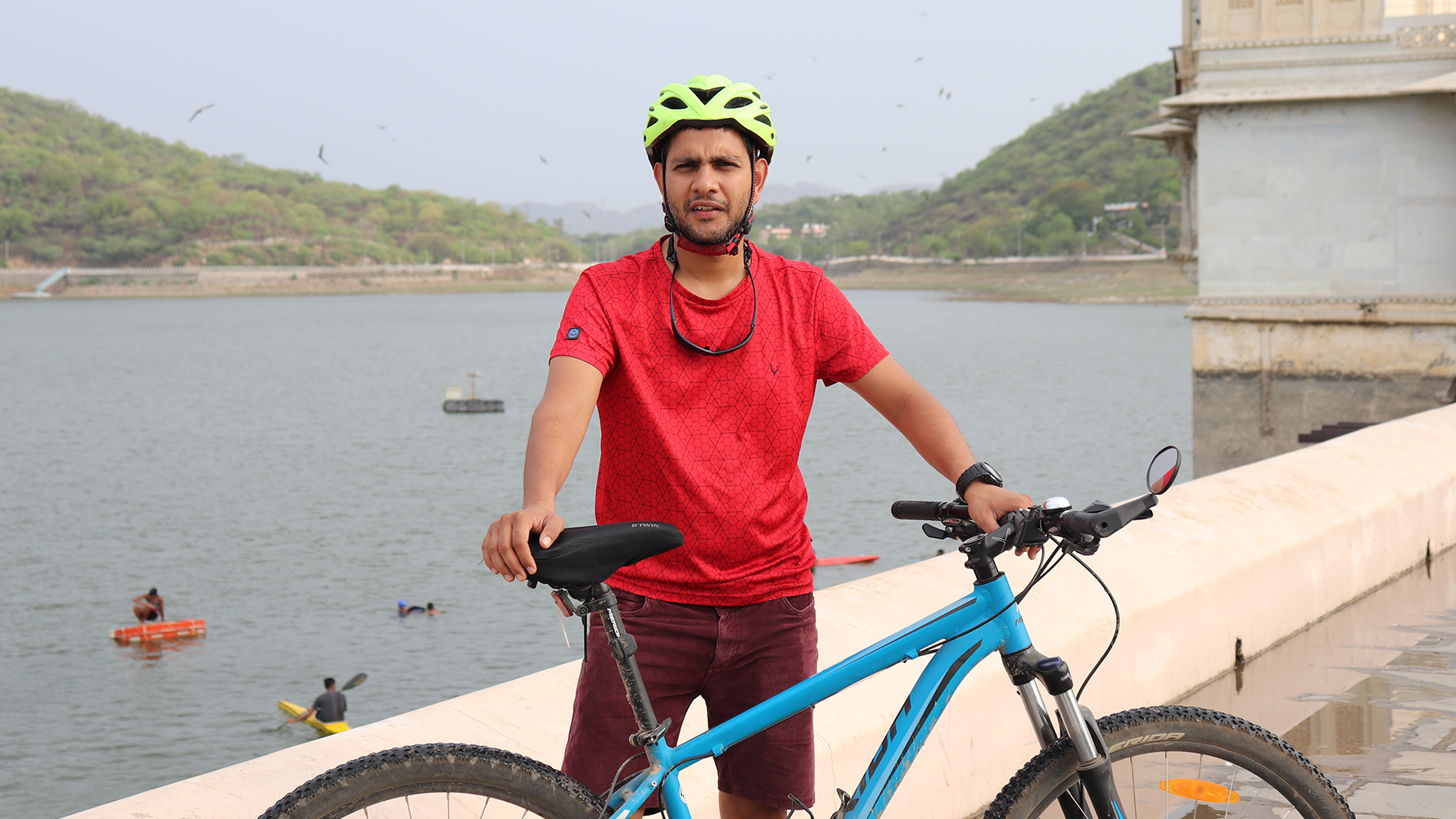 I am an Architect-Transportation Planner by profession and an avid cyclist by passion. I initially took up cycling as a natural progression from running (participated and completed a few half marathons and 10km runs across country) and also as a mean to keep myself fit and healthy. A few days into it and I soon realized that cycling allowed me to experience and explore the city in such a leisurely paced movement which no other mode can provide and match, and at the same time, given the right ecosystem and suitable environment, can play an important role in city’s mobility needs.
Being a cyclist and marathoner and working in this space for the last 10 years or so, and currently as part of our formal engagement with city government, I’m already working on making the city more bicycle friendly with initiative such as a city-wide Public Bicycle Sharing System and inclusion of bicycle tracks in a few identified smart roads.

Moreover, I am part of one of the biggest cycling clubs of Udaipur, which is a very diverse group of people from all walks of life and all age groups. Our club is engaged in bringing awareness to others about the benefits of cycling, mainly related to helping curb traffic and pollution levels in addition to keeping oneself fit and healthy, and also to use the bicycle for their daily commuting needs.

However, it’s just a start and it’s important to bring in that cultural shift- mindset, behavioral and attitudinal changes- from potential users to decision makers to really make Udaipur an ‘Bicycle City’ in the true sense of the phrase and to be known as one, among its other famous pseudo names. i.e. ’Lake City’ and ‘Smart City’.

The mission would be ‘to transform Udaipur to a cycling hub, where everyone from a young kid to the elderly uses the bicycle for his/her daily commuting needs and every 3rd recorded trip is made using bicycle in another 3- 5 years and to make it the preferred mode choice for commuting to work, school, for fun, leisure and sport as well, and where every public and tourist place is conveniently and safely connected and easily accessible via bicycle’.

1. Cycling in Udaipur, currently is seen as mode for fun, leisure, and sport and is limited to morning and evening hours of the day;
2. Harsh climatic conditions (42- 45 degree temperatures in summers) and absence of any shaded and resting areas make it impossible to cycle other than early morning or late evening hours; Imperative to create large shaded and resting areas, at least on all the major (arterial) roads, to bring people out of the comfort zone of their cars and to use cycle instead;
3. Absence of cycling-conducive infrastructure and environment, i.e. dedicated and continuous bicycle tracks, shaded and resting areas, water points, street lighting etc.;
4. Changing the mindset of decision makers to have their commitments on improving cycling conditions in the city, more importantly to have financial commitments from them on creating safe cycling and supporting infrastructure;
5. As far as cycling is concerned, it is a classic chicken and egg situation- from the user side it is always about ‘not cycling due to absence of any safe cycling infrastructure in the city’, and ‘we don’t see any cyclists on the road’ from the decision maker side. Important to bring both the groups together on the same platform for dialogue and deliberations on the same and to mutually agreed on some common ground;
6. The serious groups of cyclist, i.e. those who use cycling for their daily commute are mostly from the EWS and LIG sections of society and uses cycle not by choice but out of force and given a chance, would shift to motor vehicle.
7. Easy access to capital (loans from banks and non-banking institutions), which allows potential bicycle user to shift to motor vehicle easily;

As they say, setting goal(s) is the first step in turning the invisible into the visible, so I would also like to start with setting definite and difficult yet achievable goals in a time-bound manner. To begin with,
Goal 1: To bring in the necessary awareness among citizenry as well as decision makers towards cycling, to bring in the right mindset and attitudinal and behavioral changes through extensive communication and outreach (C&O) activities, Information Education Communication (IEC) activities, focused group discussion (FGDs) etc.
Goal 2: Secure commitment from decision makers on creating dedicated fund for creating/ improving cycling infrastructure in the city and secure investments (government and private) towards the same.
Goal 3: Preparation of Bicycle Master Plan for Udaipur, intended to serve as the primary guidance document for the city to allocate resources, undertake projects and evaluate the outcomes towards achieving the goals set for improving cycling in Udaipur.

Lots of cities in India and internationally are currently in the process of revolutionizing the entire traffic and transport ecosystem by bringing in much needed investments in pedestrian and cycling infrastructure with the understanding that these two road users groups are the most important yet most vulnerable and have been neglected for too long. However, with the changing times, the thinking has evolved that the way forward for any city is to provide its citizens with decent quality of life and to invest in sustainable mobility solutions.

With it being the ‘smart city’ (among the first 20 cities to be selected under Smart Cities Mission- A flagship mission of the Hon’ble Prime Minister of the current national government) Udaipur is already working towards promoting sustainable mobility, for instance efforts are already underway to introduce a city-wide Public Bicycle Sharing (PBS) System, via Memorandum of Understanding (Mou), a unique selection model a bit different from the traditional tendering process that can save enormous time and money on rolling out the system in the city.

Under ‘Bicycle Mayors and Leaders Program’, it is imperative to connect with Bicycle Mayors from other national and international cities, to learn from each other, and to use the global platform of diverse yet like-minded community to transform cities across the globe to make them more accessible using the ever humble bicycle.