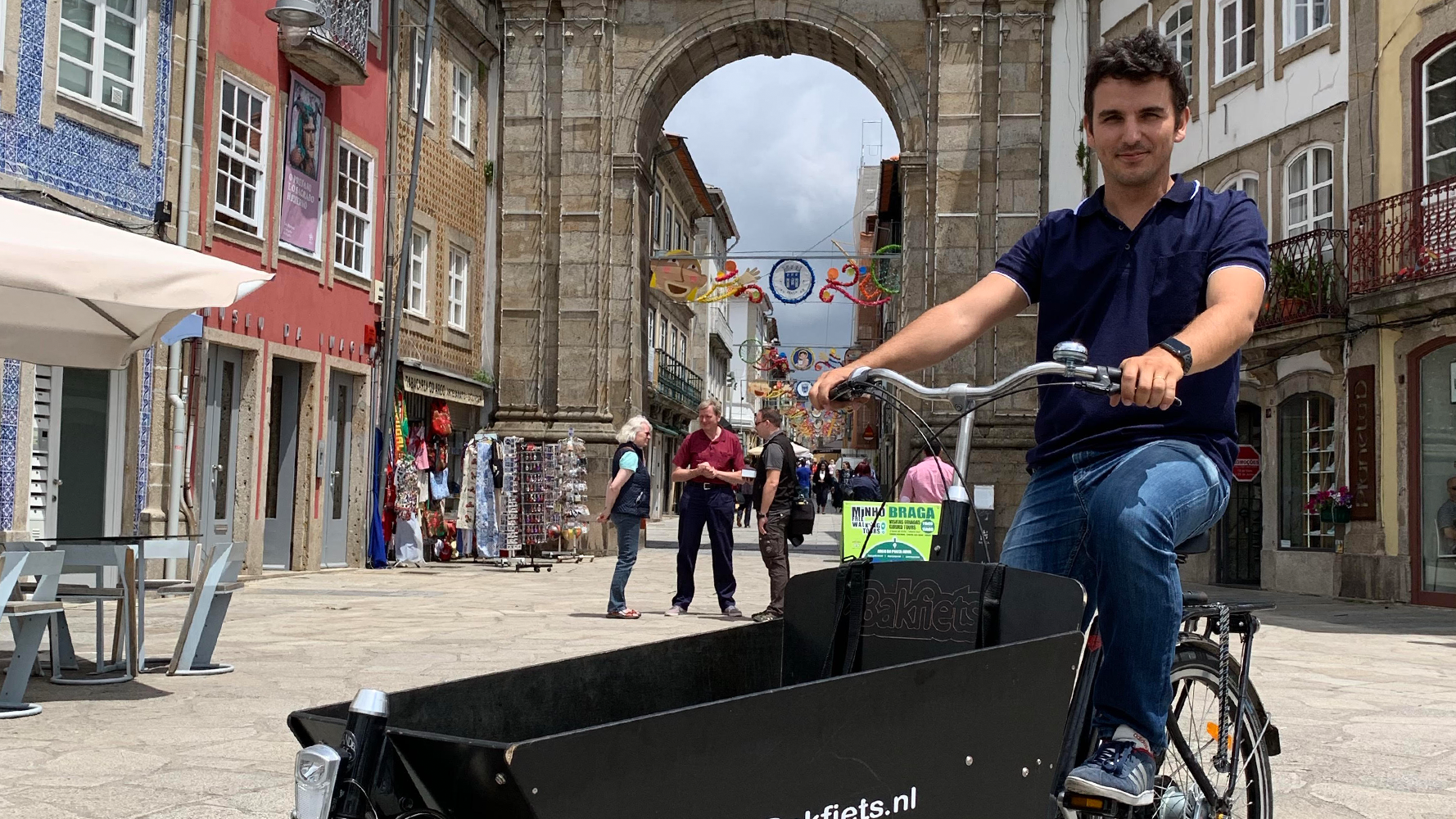 M y name is Mário Meireles. I was born in 1988 in Davos, Switzerland, but all my family is Portuguese. I am married, and I have a daughter that was born in 2017. She is, now, the main reason why I want my city to be safe for cycling. I came to Braga at 7 years old and I got some scares on the road while riding a bicycle. I got back to the bicycle as a mean of transport at the university, where I graduated in computer engineering. I majored in urban engineering – sustainable cities and now I am a PHD student in sustainability of the built environment – always with research works related to cycling mobility. I am the president of Braga Ciclável association, a non-governmental and non-profitable organization that wants conditions in the city to have more people riding the bicycle as a mode of transport. My job is at Inovation and TUB Consulting, in Braga transportation enterprise TUB.

Some people say that I am crazy to try to implement better conditions for bicycles in Braga. They use weak and usual arguments: “I am not fit”, “it rains a lot”, “it’s too hot”, “I have kids to take to School”, “it’s impossible to go shopping”, “the city is too hilly”, “it’s not possible to do my life without the car”, “you want to destroy the economy of the city”, “nobody uses the bicycle in Braga”, … sounds familiar!?

So my mission is sometimes painful and repetitive. Sometimes it would be better to talk to a wall. But when you see more people cycling in the city, more people asking “how do you do it? How can you use the bicycle with rain? Which roads do you take? How did you make it possible?”, in those moments, all the pain goes away and becomes joy. The best feeling is to get someone to use the bicycle as a mode of transportation. But then there were other major concerns about road safety in my city as well.

The biggest obstacle is political. Because people have the will to use the bicycle to commute to work, or to let their children use their bicycles to commute to the schools, but they have fear!

The roads are not safe to use the bicycle. Braga is 2000 years old, but in the last 70 years the city grew auto-centric. Even with a long public transportation history (we used to have eletric trams and trolleybuses) and a great history about cycling in the first half of the 20th century. We had a velodrome in the end of the 19th century, and also bicycle shops, bicycle coffee shops, cycle paths and a lot of people used the bicycle to go everywhere. In order to build the first motorcycle in Braga, a motor was placed on a Sameiro bicycle made in the city. But in the last 70 years the car has ruled. Big avenues where built, and even tunnels and viaducts where placed so that people on cars can avoid roundabouts or intersections. People who walk and want to cross these avenues needs to use an aerial or underground pedestrian crossing. The speed limit is 50, but there are records of 180 km/h in those avenues.

So the ignorance of the history of the bicycle in Braga, the lack of bicycle strategy and political vision are the major obstacles that we face in the city.

I have a lot of projects in the field whose main objective is to raise bicycle awareness. Because, if you notice, we have a lot of people using the bicycle in the city. We don’t have even more because there is a lack of safety on roads, and people are afraid.

I want to make short videos with some people that have a background or memory about cycling, but also with people that are using the bicycle in their day-to-day lives. I will be a part of and help organize all of the Braga Ciclável Association events, such as Braga Cycle Chic, that occurs every year. I wants to show the participants that it is possible to use the bicycle to commute in the city with normal clothes. I want to gather people around events that could be useful to clarify some doubts about riding the bicycle in Braga.

Without political will we have some trouble to grow in terms of bicycle use. Our city is a car-centered one, but this shouldn’t be seen as a problem, but an opportunity. It is the youngest city of the country, we have around 200 000 inhabitants in the county, but 120 000 living within the city borders (in 11 parishes), so here we have a big chance to change some mobility habits. But for that, events are not enough, people need to feel safe riding around by bicycle. I think we can learn from the issues and problems that we are facing in Braga, and we need to test solutions to see if they work in our city, because good solutions always need some adaptation.

The lack of information is a problem. When we speak with numbers, with data and when we show pictures from the past, people change their minds. But sometimes “we need to fight the battle more than once to win the war”. There are a lot of people wanting to see some changes, and it can be nice to see the work that these people, volunteers and independent, are doing, as citizens, to try to change the politics. We are starting to have a bottom-up process in Portugal, and here that’s something very hard to do. But we keep pushing!