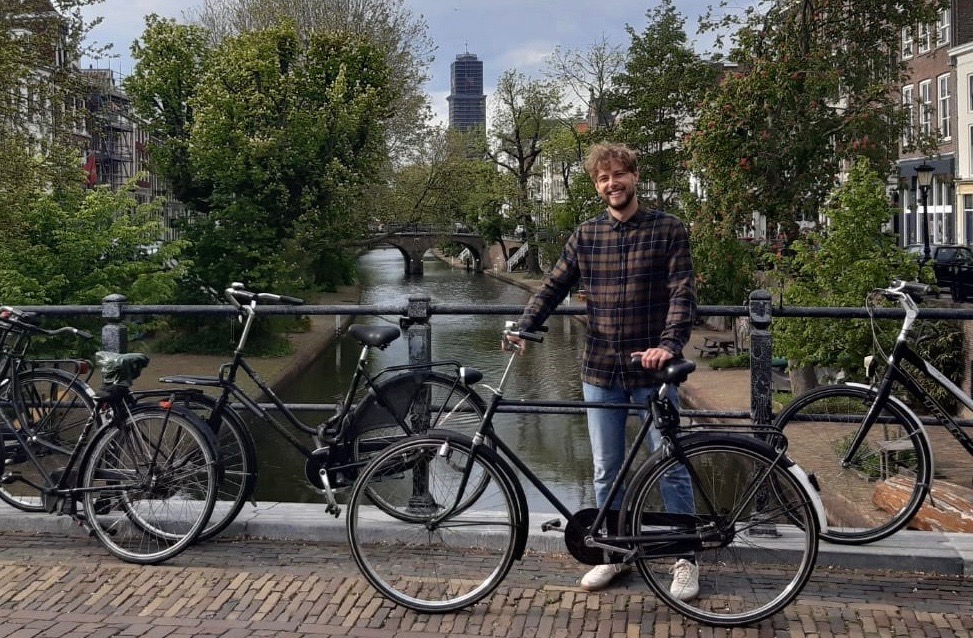 Hello everyone! My name is Jelle and I am delighted and honored to be the Bicycle Mayor of Utrecht. Bikewise, Utrecht does extremely well in relation to other countries in the world and might serve as an example to other cities. Utrecht has been elected best city for bicycles by the World Economic Forum in 2019. Every day, 33.000 cyclist ride the busiest bicycle routes in the city centre. In my city, 60% goes to the city centre by bicycle. That means that Bycs’ goal of 50% of all city trips by bicycle in 2030 is already achieved.
Yet, even in a city like Utrecht, cycling is not natural for everyone. Refugees, children and adults with physical or mental disabilities and elderly people struggle to find their spot in Utrecht’s busy streets. I feel the responsibility to make cycling available for everyone! I studied Philosophy, History and International Relations, but my first job introduced my to the cycling world. My hobby’s are cycling (obviously), jogging, surfing and making music!

I will focus on groups who risk to stay behind, because cycling is more challenging to them than to others. In a cycling city like Utrecht, those who can’t cycle risk to be excluded from the most common manner of transport. I want to make sure they are included in traffic and equally profit from the advantages of cycling. This group encompasses many different subgroups, but I will mainly focus on (child) refugees, special needs children and elderly people.

Logically, in a city made for cyclists, being able to ride a bike is a requirement. Yet vulnerable groups risk staying behind, because they lack the skills, experience of confidence to ride a bike in the busy streets of Utrecht.
Cycling offers freedom, independence and allows people to be socially connected. My most important task is to include these vulnerable groups in the bicycle community and support them to profit from the many advantages cycling offers.

I believe that having fun is the most important aspect of learning! So, enthusing vulnerable groups and creating a positive cycling climate are what I will focus on in the first place. Consequently, I want to connect with initiatives and partners who can deliver skill-enhancing lessons. Lastly, I want to consolidate their improvement and to ensure they continue cycling by connecting beginner and more advanced cyclist in bicycle groups in Utrecht.

In relation to other countries in the world, Utrecht does well bikewise, and might serve as an example to other cities. Utrecht has been elected best city for bicycles by the World Economic Forum in 2019. Every day, 33.000 cyclists ride the busiest bicycle routes in the city centre. In Utrecht, 60% of the population goes to the city centre by bicycle. That means that BYCS’ goal of 50% of all city trips by bicycle in 2030 has already been achieved. Therefore, Utrecht might serve as an example in infrastructure and bicycle stimulation to other cities around the world. Did you know we have the largest bicycle parking in the world?