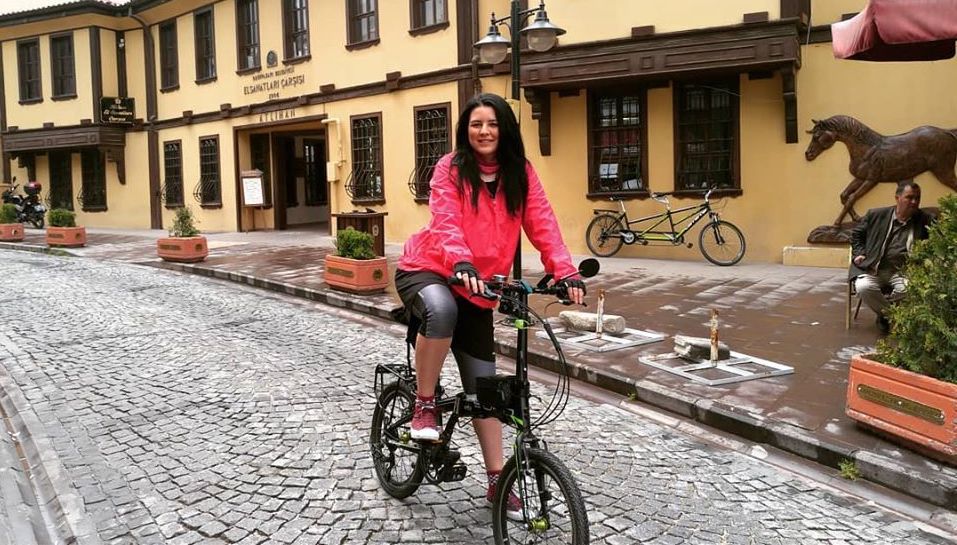 My name is İnci Şenay Güneş and I am a 30 year old chemist. I learned how to ride a bicycle when I was a child, but five years ago I started using the bicycle as a commuter. Since then I’ve been an active member of the cycling community in İstanbul including the Women on Bicycle Initiative (Bisikletli Kadın İnisiyatifi), Cyclists’ Transport Platform (Bisikletli Ulaşım Platformu) and Cyclists for 29th October (29 Ekim Bisikletçileri).

My mission is to work to introduce less motorized traffic in İstanbul for the development of a liveable city and increase the number of people who commute by bicycle. When I leave the house, I would like to see more bicycles occupy the roads and parking places. I believe we can minimize problems of motorized traffic in collaboration with the experiences of other cycling activists and users. I know for certain that the bicycle is one of the solutions to air pollution and road traffic in İstanbul. The streets of İstanbul should be safe for everybody.

There exists a mentality that we can only cycle in restricted areas. We do not have safe areas for cycling. On top of that, we should not need restricted areas to cycle. We need drivers that understand that they must share the road.

I am planning to share both the joys of cycling and the problems of the cyclists in İstanbul and support them in their cause. I would like to highlight the benefits of cycling, encourage ALL people to cycle and set examples of safe cycling in İstanbul.

İstanbul is the biggest city in Turkey when considering population and road traffic. If İstanbul can become a cycling city, all other cities can too. Each city has their own challenges but by discussing these together, we can move forward, stronger.

For questions or inquiries, you can email Inci at bicyclemayorofistanbul@gmail.com