This path for pedestrians and cyclists links one of Barcelona’s most difficult points in the metropolitan road network: the junction of the B-20 ring road and the B-23 expressway. This junction has been a barrier for people walking and cycling for 60 years, but now the new path offers the most direct crossing possible, cutting almost 500 metres off the route. The green pathway is a very pleasant and surprising space, suggestive of country lanes beyond the city limits and major road infrastructures. 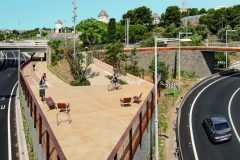 This bicycle parking is centrally situated at the campus of educational institution TU Delft and is combined with a bicycle workshop and coffee facility. The main challenge in the design was to transform the large bicycle storage required into an attractive hangout spot. This was achieved by positioning the coffee bar/workshop into an elongated and transparent space at the central square on a green slope, underneath a bike parking deck. This combination gives the building the appearance of a pavilion rather than a storage facility and by having several entrances and stairs, the building attracts and generates accessibility on all sides. 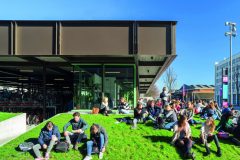 The Curtin Bike Hub is a key component of Curtin University’s Creative Quarter. The Bike Hub encourages cycling as a convenient and sustainable mode of transport to and from campus. It does this through its key features, which include washing, changing and locker facilities and a two-tier bicycle stacking system for approximately 200 bicycles. The accessible roof deck creates a fifth façade above the hub, and can be used as a space to relax and connect, in addition to being an events and activation space. 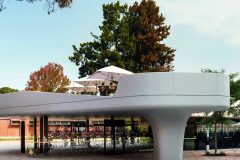 The City of Xiamen has set out to develop a better bicycle environment and produced a long-term bicycle strategy to get there. Together with the city, Dissing+Weitling developed the concept of establishing an 8-kilometre long bicycle skyway on raised platforms running along and underneath the city’s existing overhead Bus Rapid Transit (BRT) skyway in the central part of the city. The vision for the new skyway is to inspire people to prioritize the green alternative, the bicycle, instead of the car. The result is China’s first suspended bicycle path and the world’s longest aerial bicycle lane. 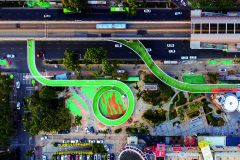 This project of Visit Limburg leads cyclists through a path, more than 200 metres long and 3 metres wide, with water at eye level on both sides. Since its opening, the interest in this special bike trail has been huge. An average of 700 visitors per day explore this part of the Limburg cycle route network. Cycling through Water was even selected for TIME’s 2018 list of the World’s 100 Greatest Places. Besides the unique cycling experience ‘Cycling through Water’ has also led to a number of improvements to the natural environment in the surrounding area. 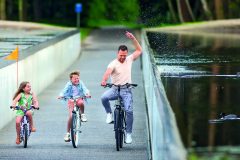 Biggest bicycle parking in the world

Utrecht Central Station, the Netherlands’ busiest public transportation hub, is undergoing radical changes to become a true intermodal transfer terminal, fully mobilising the potential synergy between bicycle use and public transport. The new bicycle parking garage is right next to the station. The three-level ‘bike-through’ garage has been designed with three aims in mind: convenience, speed and safety. Users can cycle all the way to (electronically indicated) available slots. Additional facilities such as a cycle repair shop and a bike rental service help meet users’ every need. Stairwells and designed spaces allow daylight to enter into the garage and provide some architectural drama. 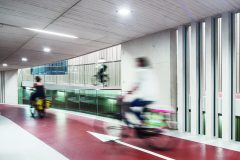 Cycling through the trees

This double circle in steel is a unique cycling experience at junction 272 of the famous Limburg cycle route network. The iconic construction, which is nearly 700 metres long, takes you into higher realms. You can cycle or walk through a different scene every season. You discover the sounds and scents of the Pijnven forest whilst biking to a height of 10 metres. This exceptional landmark, with a diameter of 100 metres, offers a sensational yet safe cycling experience for young and old. 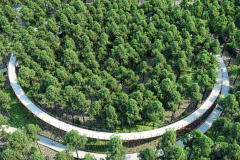 This project sees a redundant piece of highway infrastructure reused and reinvented as a cycleway, to complete Auckland’s inner city cycle loop. The 600 metre offramp is painted a bright resolute pink to signal an urban realm for pedestrians and cyclists that is differentiated from the surrounding active highway network. 300 individual LED light poles are arranged as a spine down one side of the cycleway, acting as an interactive light sculpture that transforms the new urban space. 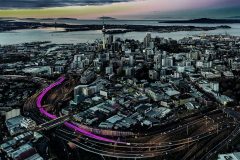 The new white Ölhafen Bridge is an elegant, curved structure. It spans the 70 metre wide entrance to the oil terminal harbour in Raunheim with a spiralling access ramp. The oil depot is used for the transfer and storage of highly flammable substances. For this reason, the bridge had to be designed to prevent people on the bridge gaining access to the passing tankers. The further objective was to emphasize the bridge’s leisure use, and above all to provide unobstructed river views, despite all these safety issues. 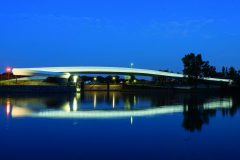 The Queensway is one of New York’s abandoned railways and can be found – as the name suggests – in Queens. It is a void and a wall that separates two urban fabrics. The Queensway is located in a local residential community. Thus, it has to blend existing local communities in a physical space and provide space to revitalize the local community and invigorate the everyday life of its neighbourhoods. The project “Upside Down Bridge” proposes an overturned bridge be used to connect spaces on ground level and above. Although a linear structure, the bridge will be a catalyst to tie disconnected urban areas. 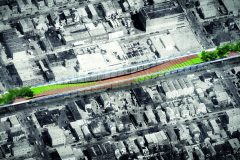 Nørreport Station is the busiest station in Denmark. It is composed of a series of rounded, floating roofs, mounted on striking glass pavilions. A study of preferred routes has formed the basis for the station’s new design, providing an open and welcoming public space with specific thought directed to the needs of cyclists. Ample bike parking is a main feature, accommodating 2,500 spaces. In order to create a clear hierarchy between the area for bicycles and the area for city life, all bicycle parking spaces have been placed 40 centimetres below the city floor. 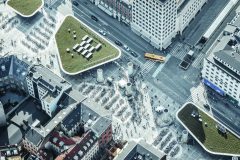 The RheinRing is located at the Rhine Carée, one of the most significant public urban spaces of Cologne, between two major bridges, the Hohenzollernbrücke and the Deutzer Brücke. It represents the new center, as well as the link, between the two halves of the inner city. The circular construction serves as an attractive path directly accessible from the Altstadt, the historical city center, on the west, and from the Rhine Boulevard in the east, as well as offering access to the flanking Rhine bridges. 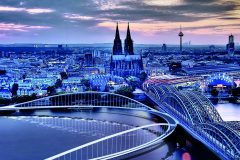 Radbahn converts the currently mainly neglected space along and under the iconic elevated metro line U1 in the heart of Berlin into a 9km shelter for a separated, and predominantly covered, bike path. Radbahn is an enhanced cycling experience because of: a path surface that partially uses recycled plastic, a signaling system that communicates with the cyclists to provide them recommendations and useful information, and green planting that reduces the noise from the surrounding traffic. 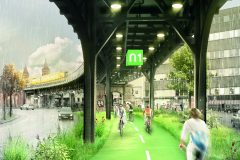 NL Architects (The Hague, The Netherlands)

The Hague Central Station is currently undergoing a major transformation as it is turned into a modern hub. A grand new hall comes into being and a spectacular feature is the elevated tram track that passes through the hall. This transformation sparked the idea from NL Architects that the station’s bike parking could be inserted into the hall as well. Elevated plates that organize the bike parking in strips make an efficient, but also striking, layout. The raising of the bike parking enables a lot of daylight to get in and creates a spectacular welcoming experience. 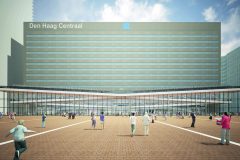 NEXT Architects (Purmerend, The Netherlands)

The Melkwegbridge works as a connector between the old and the new center. Its unique form derives from the functional approach to separate the routing for pedestrians and bikes crossing the water. Pedestrians are given the opportunity to maintain the direct line of the historic Melkweg (Milkroad) within the bridge, arching over the water at 12 metres high and creating an incredible view over the city. The 100 metre long bicycle deck under the arch stays low to make way for an accessible slope for bicycles and wheelchairs. 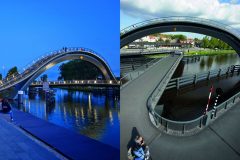 Photo: Jeroen Much and Andras Schuh