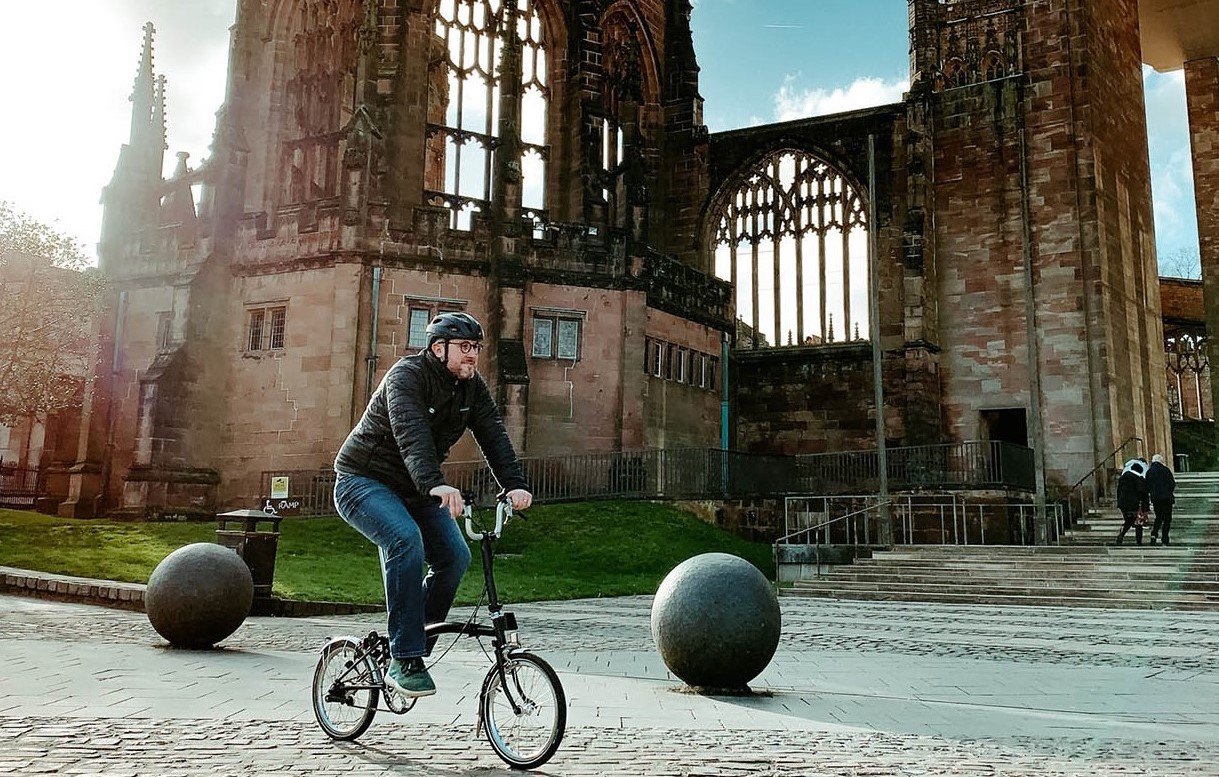 My name is Adam Tranter. I’ve been riding bicycles of all types all of my life. I’m passionate about turning the UK, and my home city of Coventry, into great places to cycle so that everybody can reap the benefits. In 2008, I founded communications agency, Fusion Media. The agency focuses on cycling and active lifestyle; we work with brands like Brompton Bicycle, Evans Cycles, Shimano and Red Bull. We now have a once-in-a-generation opportunity to help more people onto bikes for greater personal and public health and to help the climate crisis; that’s why I’m working as Bicycle Mayor of Coventry.

I want to help Coventry reach its potential by supporting those who live, work and visit the city in making bicycles the obvious transport choice for short journeys, regardless of age, gender or background.

I will hold Coventry’s policymakers to account, ensuring cycling is a key priority in tackling the Climate Emergency. I will work to promote the benefits of cycling and challenge the status quo of one of the UK’s most car-centric cities.

My three key priorities as Bicycle Mayor is to:
1. Work to ensure that Coventry meets its cycling potential; working with policymakers to ensure priority is given to cycling and active travel
2. Engage media and partners to better communicate and showcase the benefits of cycling for everybody in Coventry
3. Prioritise the implementation and promotion of initiatives that benefit the most vulnerable: children, people with special mobility needs, vulnerable road users and those affected most by pollution

Coventry is the fastest growing city, in terms of congestion, according to TomTom Traffic Index. It’s a city that was rebuilt after WW2, almost entirely around the private motor vehicles. Today, Coventry is still a car-dominated city; the iconic London Taxi is manufactured here and Jaguar Landrover still has major car production plants here. These economies are important for the political landscape and local economy but there is currently no voice for cycling.

Car ownership is considerably less than the national average yet residents are suffering the negative effects of air pollution. 98% of monitored roads in Coventry have PM2.5 emissions above the World Health Organisation’s guidelines.

I am engaging with key stakeholders to outline my vision as Bicycle Mayor. It’s essential that this is a collaborative approach; I want to help bring together the best of Coventry and showcase what’s possible when you put people first.

I’m working on a series of campaigns that seek to encourage behaviour change but only so much is possible with a change of individual actions. That’s why my main focus will be holding power to account in ensuring cycling and active travel are given the funding that’s needed to transform the number of people choosing cycling.

I’m always fascinated by the UK’s cultural approach to cycling when you look at it on a global scale. It’s essential not to label and generalise a whole group of people. In the UK, and locally, we think of cycling as a recreational hobby and have a stereotype of those who cycle. A successful cycling city reflects the diversity of its citizens and the bicycle is accessible to all.

Coventry is also a city with incredible bicycle heritage. The popular Penny Farthing is said to have its origins in the city and the modern safety bicycle, the design that still exists today, was invented by John Kemp Starley, one of the city’s cycle manufacturing pioneers. After Starley’s death, his company Rover then went onto build motorcycles and eventually cars. In today’s age where the national transport conversation is about electric cars, I think it’s important to show people how many of today’s problems can be solved by Starley’s humble bicycle design and that these issues aren’t necessarily fixed by more technologically advanced cars.